A third-period rally wasn’t enough to make up for a disastrous four-goal second period as the Montreal Canadiens lost to the Nashville Predators 4-2 at home on Tuesday.

“Just as professionals, you’ve got to be better than that,” said forward Brendan Gallagher. “It was extremely disappointing, obviously. We felt like we left our goaltender out to dry. You have a second period like that, it costs you the game.”

Filip Forsberg had back-to-back goals as Nashville (35-26-8), built a 4-0 lead in the second period. Ryan Johansen and Calle Jarnkrok also scored in the period. Juuse Saros made 32 saves for the win in the Predators’ net.

Artturi Lehkonen and Lukas Vejdemo had goals in the third period as Montreal (31-31-9) lost its third straight game. The Canadiens were coming off two disappointing games in Florida, getting shut out 4-0 by the Tampa Bay Lightning on Thursday and losing 4-1 to the Panthers on Saturday.

Carey Price stopped 32 for the Habs. It was the league-leading 58th game of the season for Price.

“We came out in the third with more energy and more determination,” said Julien.

Johansen opened the scoring less than a minute into the second, rifling a wrist shot past Price for his 14th of the season. Just over two minutes later, it was Jarnkrok’s turn to pounce. With Price screened off the faceoff, he whipped a quick shot into the net.

Forsberg took a pass on the power play, skated just outside the face-off circle and put the puck over Price’s outstretched glove for his 20th of the year. That gave Nashville a 3-0 lead 8:18 into the second.

Forsberg struck again at the 16-minute mark, though this time luck played a critical role. A Roman Josi point shot hit a skate in front, bouncing directly onto the Swede’s stick and leaving Price completely out of position to make a save.

In a period when nothing went right for the Canadiens, even the Bell Centre’s lights got in on the action, with some above-ice flickering off and forcing a play stoppage during a rare moment of action in the Preds’ zone.

It was in that third period that the Canadiens almost managed to redeem themselves, putting 13 pucks on net while allowing just four shots against Price.

Lehkonen finally managed to get his team on the board less than three minutes into the third, shovelling a rebound off the boards past Saros.

Going into the game, Saros hadn’t allowed a goal since losing to Minnesota on March 3. Lehkonen’s goal brought an end to Saros’s streak, which included consecutive shutouts against Dallas.

“It’s been unbelievable,” said Johansen. “At one point it felt like the kid’s going to keep going and going. He’s really stepped up for us.”

Even with the loss, it was a memorable evening for Vejdemo. The rookie posted his first NHL point in his seventh game, working his way to the front of the net and one-timing a Dale Weise pass from behind the goal line in.

Shortly after the game the Canadiens announced that Vejdemo had been demoted to the American Hockey League’s Laval Rocket.

With leading scorer Tomas Tatar out, the Canadiens juggled their top lines, lining Gallagher up with Max Domi and Charles Hudon.

The Canadiens announced mid-game that Tatar would be out indefinitely with an upper body injury but Julien said he won’t need surgery.

“We thought we could get a timeline but it’s an injury that’s hard to determine,” he said. “I know it’s not a day-to-day thing. It could be a week and then he moves on. Even medically we don’t have more information than that.”

The Predators are locked into a tight battle for the West’s two wild-card spots. They entered the game tied with the Vancouver Canucks with 76 points. Minnesota and Winnipeg hold the wild cards with 77 and 78 points, respectively.

The Bell Centre hosted a pre-game ceremony memorializing Habs great Henri Richard, who passed away on Friday. The crowd gave a standing ovation to Richard’s family, which was in attendance, followed by a moment of silence.

Habs forwards Jonathan Drouin and Tomas Tatar and defenceman VIctor Mete sat out the injuries while defenceman Karl Alzner was a healthy scratch. ... Nashville defenceman Dan Hamhuis sat out with an injury while Austin Watson, Yannick Weber and Colin Blackwell were healthy scratches. 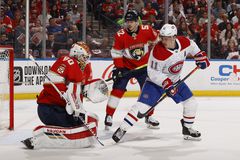