On a team laden with expensive skaters, Frederik Andersen stands out as its most valuable and underpaid player.

The strapping goalie earns less than half the Maple Leafs’ top forwards, yet they are always in danger of losing without him. A third of the way into the season, Toronto is one of only two clubs yet to record a victory with a backup in the net. Columbus is the other – and has three points when its starter has taken a rest. Toronto has just one.

Andersen delivered another masterpiece on Saturday night. As often has been the case, he was the Maple Leafs’ first, second and third star in an overtime conquest of the Buffalo Sabres at Scotiabank Arena.

It came down to him outperforming his counterpart at the other end, Carter Hutton, and he did. It always comes down to him.

“The team has performed better when Freddy’s in there, so there’s clearly a trend in that direction,” Sheldon Keefe, Toronto’s head coach, said after his first home win since he replaced Mike Babcock. “That’s obviously well documented. We need to figure out why that is.

"It’s something we’ve got to get over.”

Between them, the Maple Leafs backups are a combined 0-6-1. For the meantime, they plan to stick with Michael Hutchinson in that role – because they have no other choice. Kasimir Kaskisuo was shelled in his only start at Pittsburgh.

Hutchinson is not much help, though. He ranks 72nd and last among NHL goalies who have made a handful of starts. He was strafed for four second-period goals in a 6-4 loss in Buffalo on Friday afternoon.

In his most spectacular of 29 saves, Andersen flopped onto his belly to grab a one-timer from Conor Sheary that was struck so hard that it propelled the backstop’s glove back into the net – but not conclusively over the red goalline.

“That was amazing,” William Nylander, who scored one of Toronto’s two goals, said. It was his 10th of the season; after holding out, he had only seven last year. “It kind of saved me. That was my guy."

It will be interesting to see who Toronto calls upon in its next outing in Philadelphia on Tuesday. Each point that is lost could be critical to reaching the playoffs in the tightly contested Atlantic Division. As of Sunday, four points separated the second-place team and the sixth.

Do the Maple Leafs dare give another chance to a backup? Do they start Andersen in both games of a set of back-to-backs? Nazem Kadri and the Colorado Avalanche visit Toronto on Wednesday.

Andersen declared on Saturday that he is prepared to start 60 to 65 games if it is necessary, and that is how it looks unless a suitable second goalie is acquired, perhaps for one of the lesser forwards such as Andreas Johnsson or Kasperi Kapanen.

Andersen is 13-5-3 with a .921 save percentage over 21 starts. That is fourth-best in the league, and his usage so far is comparable to the game’s elite.

Other teams, however, can rest their starters with reasonable confidence of coming away with a win.

Fans recognize Andersen’s value. His acrobatics and keen senses had them on their feet, chanting his name over and over on Saturday night.

“I tried to have fun out here and to enjoy the atmosphere," he said. “That’s what brings out the best in me.”

He’s in the fourth season of a contract that pays him US$25-million over five years. That is peanuts for the Maple Leafs, who are paying Auston Matthews, John Tavares and Mitch Marner a combined US$37.5-million this season.

They are even paying out more to two players no longer on the active roster – Nathan Horton (US$5.3-million) and David Clarkson (US$5.2-million). There is something inequitable in that.

None plays a bigger role than him.

"It’s nice to have Freddie there,” Keefe said after Andersen saved the Maple Leafs on Saturday night. “It is nice to have a guy capable of that. Without question, you need [it] at different times.”

So far, he is the only one capable. 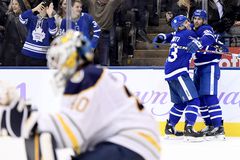 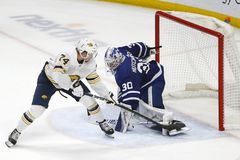 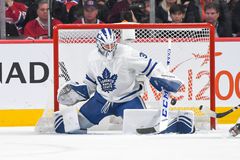