The Vegas Golden Knights finally found a crack in the stone wall of Vancouver Canucks goaltender Thatcher Demko, firing shot after shot at him Friday until – finally – one puck went bar down to knock the last Canadian team out of the NHL playoffs.

Shea Theodore scored on a wrist shot through traffic late in the third period to break a scoreless tie, and Vegas added two more into an empty net to beat the Canucks in the seventh and deciding game of their playoff series at Rogers Place.

“That goalie was just unbelievable. It was just hard to get one past him,” Vegas forward Jonathan Marchessault.

“ (But) right off the bat we just knew it was our game tonight. And we kept going no matter what adversity we were going to face, if it was killing penalties or a hot goalie, we just kept going, staying positive in the locker-room.

The Golden Knights will face the Dallas Stars in the Western Conference championship.

Demko kept the Canucks in the game, which saw Vancouver outshot 36-14, in a third consecutive game of puck-stopping heroics.

Vegas had been up 3-1 in the series before Demko came on in relief for injured starter Jacob Markstrom in Game 5. He stonewalled the Golden Knights by stopping 90 of 91 shots over the next two games, allowing Vancouver to win 2-1 and 4-0 and tie the series.

Friday’s game was the same script: Vegas dominated the Canucks, left them running around in their own end as the Golden Knights fired shot after shot, many of which were blocked or missed the target. When they found their mark, Demko speared the puck through traffic or flicked out a pad to stop it.

Vegas had 21 shots through the first two periods while Vancouver had six. Vegas goalie Robin Lehner was so starved for work that during one TV timeout he skated out to the blueline and did leg stretches to keep limber.

“There were times it felt like we could have played for six hours and not scored on (Demko),” said Vegas head coach Peter DeBoer.

“What he did and the lightning they caught in a bottle the last three games with him and how he played, what I’m proudest of is how our group stuck with it.

“When you hit a hot goalie like that a lot of times you can fall into the trap of cheating to try to push for offence.”

Vancouver had two great opportunities in the second period to flip the script but both times were denied.

First, Lehner made the highlight save of the night, flashing his glove to knock down a Brock Boeser shot on a wide-open net.

Then Vegas killed off a five-minute Vancouver power play after winger Ryan Reaves was given a game misconduct for delivering a shoulder-to-chin hit on Tyler Motte.

Lehner, making his 12th start of the playoffs, got the 14-save shutout win to improve to 8-4. It was his third shutout of the series.

It was the fifth game in seven nights for both teams.

“I’m not going to lie, this was a lot of hockey,” said Vancouver captain Bo Horvat. “But we can’t make excuses for ourselves. They played just as much hockey in the same amount of time.

“We would like to help (Demko) out a little bit more. Maybe he doesn’t get peppered as much as he did, but he stood tall. He was a brick wall for us. I couldn’t be prouder of our guys.”

The win avoids a disastrous déjà vu for the Golden Knights.

After advancing to the Stanley Cup final in their inaugural 2018 season, Vegas was up 3-1 to the San Jose Sharks in the first playoff round last year only to lose three straight and go home.

All games in the Western Conference playoffs were played without spectators at Rogers Place. Players isolated between contests in a so-called bubble to prevent contracting COVID-19.

Despite the loss, the playoffs represent a step forward for the Canucks.

Vancouver had not been in the playoffs since 2015. The Canucks beat the Minnesota Wild in this year’s qualifying round, then dispatched the reigning Stanley Cup champion St. Louis Blues in six games, Vancouver’s first playoff series win since 2011.

The Canucks last playoff win was over the Sharks in the final-four series in 2011. Vancouver went on to lose to the Boston Bruins that year in the Stanley Cup final.

Half of this season’s roster, including key performers like Markstrom, Demko, Elias Pettersson, Boeser, and Quinn Hughes, now have 17 games of playoff experience, including bounceback performances and elimination games, to draw upon.

Their best players were their best in the post-season: Pettersson logged seven goals and 18 points. Horvat scored 10, and J.T. Miller racked up a goal and seven assists against Vegas.

“I don’t think many people thought we’d be a goal away from going to the semi-finals,” said Vancouver head coach Travis Green. “It’s not many times you go into a playoffs with 10 guys playing their first playoff game and you win a Stanley Cup.

“You’ve got to fall. You gotta get up. You gotta fall and get up and learn how hard it is. This was a good experience for our guys and we’ll be a lot better for it.”

Meanwhile, Canada’s Stanley Cup drought stretches on and on.

No Canadian team has won the Stanley Cup since the Montreal Canadiens defeated the Los Angeles Kings in June 1993.

For context, in June 1993, as the Habs hoisted the Cup, Kim Campbell was days away from taking over as Canada’s first female prime minister, the NHL had 24 teams, Sidney Crosby was five years-old and Connor McDavid would not be born for another three years and seven months. 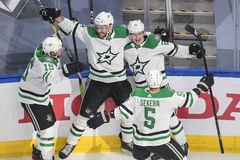