Chris Tierney made sure Filip Gustavsson’s first NHL start was a victorious one.

Tierney’s fourth goal of the season – but first in 30 games – at 17:24 of the third period earned the Ottawa Senators a 2-1 win over the Calgary Flames on Monday night. But a big reason for the Senators’ victory was Gustavsson, who was the game’s first star with 35 saves at Canadian Tire Centre.

“He played great, I thought, all night,” Tierney said of his goaltender. “He made some really big, timely saves for us.

“If he doesn’t play the way he does we probably don’t win so he deserves the first star, for sure.”

But Tierney did take solace in finally ending his lengthy goal-scoring drought with the game winner.

“It was nice, obviously I hadn’t scored in a while,” he said. “To score and to get a big goal that ends up being the game-winner makes it even better.

“When you feel like you’re getting looks and opportunities and pucks are bouncing or you’re not converting or finishing, it’s gets a little frustrating. But you’ve just got to try to stick with it and play your best and help the team win where you can.”

Ryan Dzingel also scored for Ottawa (11-20-3), which has just two wins in seven games (2-3-2) but improved to 4-2-0 this season versus the Flames. The two teams meet again Wednesday night.

Johnny Gaudreau scored for Calgary (15-15-3) which fell to 4-3-0 under head coach Darryl Sutter. The Flames played their third game in four nights and are 1-3-0 in their last four contests.

Gustavsson, 22, became the fourth different goalie to start a game this season with Matt Murray, Marcus Hogberd and Joey Daccord all hurt. Gustavsson made eight saves in his NHL debut Wednesday after Daccord was injured in a 3-2 shootout loss to the Vancouver Canucks.

“It (winning NHL debut) means everything,” Gustavsson said. “I’ve been here for a couple of years and I haven’t had the success I want.

“It’s just a great feeling to give something back to them and for me to play in the best hockey league in the world.”

The six-foot-two, 183-pound Gustavsson lost his shutout bid when Gaudreau scored with 5:06 to play in the third. Gaudreau came off the bench and took a slick centring pass from Milan Lucic before firing a shot past Gustavsson for his 13th of the season.

But Gustavsson, a 2016 second-round draft pick of the Pittsburgh Penguins, remained undeterred.

“I think I had the same mindset the whole game that I’m just going to enjoy it,” Gustavsson said. “It was just like a bummer to get scored on with five minutes left (but) he’s such a skilled guy.

“I just had to focus on the next shot and let the players do their job to.”

Gustavsson was attempting to become the first Ottawa goalie to record a shutout since Craig Anderson did so March 26, 2019 against the Buffalo Sabres.

“He made saves,” said Ottawa head coach D.J. Smith. “I guess that’s why you work every day in the minors.

“You never know when you’re getting the chance. That’s a lesson to everybody that when your number gets called make sure you’re ready and he was ready.”

Sutter said Ottawa didn’t do anything that the Flames didn’t expect to see.

“We knew exactly what we were in for,” he said. “To be quite honest, they’re a team that’s a lot like ours in terms of their forwards.

“That’s exactly how it played out.”

But Gustavsson did enjoy playing in a game with veteran NHL goalie and countryman Jacob Markstrom, 31, at the other end for Calgary.

“It’s cool,” Gustavsson said. “He’s been the world junior goalie, he’s been the national team goalie throughout the years.

“It’s so cool to play against him, it’s a little bit of a star-struck moment almost. "

Dzingel had the lone goal of the first at 10:23. He converted on a 2-on-1 with Clark Bishop, beating Markstrom on a wrist shot for his seventh of the season and fifth in nine games since being acquired from Carolina.

“I like being here and I like putting that sweater on.” he said. “I was honestly thinking pass the whole way.

“I kind of panicked there and just turned and shot it.”

And Gustavsson made it stand through two periods despite Calgary holding a 26-16 edge in shots on goal. He made a nice stop on Calgary’s Zach Rinaldo just over nine minutes into the second, then denied Flames forward Dillon Dube with 2:34 to play.

Although Markstrom only faced four shots, he made a nice save on Ottawa’s Colin White with under a minute in the frame to keep it a one-goal game to that point. 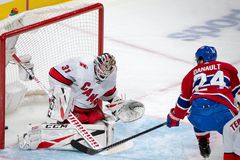 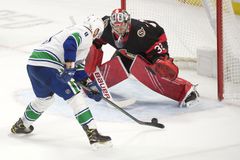 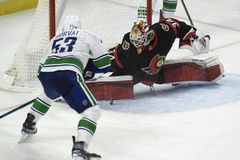