He has yet to play an NHL game, but Canadian national junior team forward Nick Suzuki already has experienced quite a journey in the pro ranks.

The 19-year-old from London, Ont., was selected 13th overall by the expansion Vegas Golden Knights in the 2017 NHL draft. But prior to this season, Suzuki was the centrepiece in a trade that sent him to the Montreal Canadiens, along with Tomas Tatar and a 2019 draft pick, in exchange for ex-Habs captain Max Pacioretty.

“Just to start off my NHL career with a brand new team was pretty interesting,” Suzuki said before Wednesday night’s Canada-Denmark clash, the opening game for both teams at the 2019 world junior championship in Vancouver and Victoria.

“To get traded to Montreal, one of the most historical franchises in hockey, it’s pretty cool to be part of that now.”

Suzuki attended the Knights’ training camp last September before being returned to the Owen Sound Attack of the Ontario Hockey League. This fall, he played three pre-season games with the Canadiens before being sent back to junior.

Las Vegas has glitz and glitter, but Suzuki was impressed with the tradition in Montreal.

“When I was in Vegas, the arena was just being built,” he said. “Coming into the Bell Centre was pretty cool for me being a Canadian guy. You can see the history throughout the whole arena, in the dressing room and up in the nosebleeds.

“It’s pretty cool to be part of that.”

The Knights were reluctant to give up Suzuki, but Montreal general manager Marc Bergevin insisted he be part of the Pacioretty package. The Canadiens like the size and speed of the five-foot-11, 183-pound forward and project he can become a 30-goal scorer.

The deal came as a surprise to Suzuki, who has 20 goals and 43 points in 28 OHL games this season.

“I was pretty shocked,” he said. “I hadn’t heard anything about myself being in a trade or any team wanting to try to get me.

“To hear Marc Bergevin say I was a centrepiece of the trade was pretty cool. It gives you a lot of confidence. You know you are going to a place they want you pretty bad. I’m really excited to be there now. I want to prove the Canadiens right for wanting me.”

A centre most of his career, Suzuki is comfortable playing right wing. With the national junior team, Suzuki has been playing right wing on a line with Alexis Lafreniere and Jaret Anderson-Dolan. He’s also seen time on the power play.

Suzuki earned an assist in Canada’s 5-2 loss to Finland in an exhibition game Sunday night.

“Nick is a versatile player,” said Hunter. “He has a lot of skill, a lot more skill than you realize.

Suzuki is happy to play where he can make the most difference.

“I think I have the ability to play with a lot of different people,” he said. “I can play with skill, I can cycle the puck. Centre or wing, I think I can help any line.

“Having that flexibility as a player is really good. The coaches can trust you more and it gets you more ice time.”

Suzuki came to this year’s camp with extra motivation after being a late cut from last year’s team.

“That was the first time I got cut from a team, other than an NHL camp,” he said. “It was pretty tough for me, but you have to take it as a learning experience. I came back this year really wanting to earn a spot.

“It’s a different feeling to be cut from a team you want to play for your whole life. I just needed to learn from it and try to get better.” 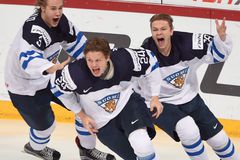 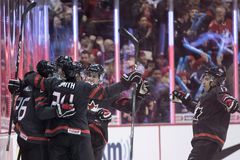