Advocates say a young hockey player’s decision to come out as gay this past week, just as he is on the cusp of a possible National Hockey League career, needs to be a catalyst for meaningful cultural change in the game beyond Pride nights and rainbow tape.

“It is a phenomenal thing, but it’s not because the (hockey) culture made it safe,” said Brock McGillis, a former goalie who played professionally in North America and Europe.

“For every Luke Prokop there are a thousand [LGBTQ] kids quitting hockey.”

Mr. McGillis, who came out five years ago after his career ended, spoke extensively to Mr. Prokop before the 19-year-old made his announcement. Based in Toronto, Mr. McGillis has become a voice for LGBTQ issues in hockey with the aim of creating safe spaces in the insular world of dressing rooms and rinks.

He has worked on inclusion with individual teams at high levels, but said he has been stymied in bringing in leaguewide changes.

“You can do all the PR stuff you want but what are you doing to make that dressing room more of a safe space instead of a space that is filled with homophobic language and where people don’t feel comfortable? How are you humanizing these issues and how are you shifting your culture?”

Mr. Prokop, from Edmonton, has been playing junior hockey for the Calgary Hitmen of the Western Hockey League. A defenceman, he was picked 73 overall by the NHL’s Nashville Predators last year, will go to camp this fall and could become the first openly gay player in the NHL.

“We pledge to do everything possible to ensure that Luke’s experience is a welcoming and affirmative one,” NHL commissioner Gary Bettman said in a statement.

Kristopher Wells, an advocate and researcher, says it’s critical to have LGBTQ role models in sport.

“People listen to their heroes,” said Mr. Wells, an associate professor and research chair for public understanding of sexual and gender minority youth at MacEwan University in Edmonton.

“When young people see their role models stand up, they want to emulate that behaviour and be a part of those new social norms that are forming.”

Mr. Wells said true change starts with a supportive group in the locker room or a captain telling a teammate that homophobic slurs won’t be tolerated.

That way, he said, those who decide to come out won’t have to swap one set of anxieties for another.

“Why Luke’s decision is seen as being so courageous is not just because he’s the first, but [because] all LGBTQ people know the moment you become visible [when] you come out, you’re more likely to be victimized. You become a target. And that’s not easy to deal with.”

Cheryl MacDonald is a sports sociologist who has researched and written extensively on homophobia in hockey. She said Mr. Prokop’s high skill levels will serve to insulate him somewhat, but he’ll still have to navigate the bias of some decision-makers who laud inclusivity in public, but act differently in private.

“Luke’s story is evidence that it is becoming safer to be an openly gay man in men’s competitive professional hockey, but since he’s the only one right now, that shows we have work to do,” said Ms. MacDonald with Saint Mary’s University in Halifax.

“My research has shown that if you can perform on the ice, what you do in your spare time matters less. [But] at very top levels of the game, it is difficult to be different.”

And that doesn’t just apply to being gay, she added.

“If you are concussed or injured, if you are dealing with drug and alcohol addiction problems, if you have mental-health problems, if you don’t fit in somehow, chances are there is someone that has your skill set and less perceived baggage that will take your job. It’s easier just to stay quiet.

“Until we change this idea that you can’t just be yourself and be taken where you’re at, it’s going to be practically impossible to be a gay man in this game.”

Mr. McGillis said the potential is there.

“I think hockey people are really good people. I just don’t think they realize there’s a problem,” he said.

“[They] will rally. We just need to show them this is something to rally around.”

‘No longer scared to hide who I am’: Nashville Predators prospect Luke Prokop comes out as gay
July 19, 2021 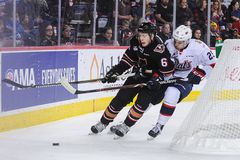