The annual showcase is going to be one big outdoor game when the Dallas Stars play host to the Nashville Predators at the historic Cotton Bowl Stadium on Wednesday – even without “Big Tex” booming out the customary “Howdy, folks!” that visitors to the State Fair of Texas hear each fall.

More than 84,000 fans are expected for the NHL’s 12th New Year’s Day game, this one at the stadium where the boots belonging to the fair’s iconic 16.8-metre talking cowboy will be rink side near an oversized, ranch-style entry arch. It is expected to be the second-largest crowd ever for an NHL game.

Part of the fair’s midway just outside the historic stadium, including a 64.6-metre-high Ferris wheel and other carnival rides, will be open for those with tickets before and after the NHL’s southernmost outdoor game.

“It started as a bit of a pipe dream,” said Stars chief executive Jim Lites, whose team played host to its first NHL draft in 2018 at its arena only a few miles from the Cotton Bowl.

Now an NHL game is being played inside the stadium that is home to the annual Red River college football rivalry game between Texas and Oklahoma that has been played during the State Fair for 90 years. The Cotton Bowl game was played there each New Year’s Day until a decade ago, and the Dallas Cowboys called it home for their first 12 seasons, from 1960-71.

“It’ll be a nice venue, have a good feel, and everybody in Texas and this area, they know about the Cotton Bowl,” Stars centre Joe Pavelski said. “I think that’s a big draw as well, come see something different there.”

Pavelski signed with Dallas as a free agent last summer after his first 13 NHL seasons with the San Jose Sharks, who played host to the Los Angeles Kings in a Stadium Series game at the home stadium of the NFL’s San Francisco 49ers in 2015.

When the State Fair of Texas was open during its 3.5-week run last fall, Pavelski and his family walked around, played games and “spent a lot of money” to win a big teddy bear.

The ultimate prize Wednesday will be the two points for the winner between the two teams that met in a first-round playoff series last April that the Stars won in six games. Both are coming off distinctly different back-to-back games.

Nashville had 5-2 and 6-4 losses to Pittsburgh, with goalie Pekka Rinne pulled from the first game and Juuse Saros yanked from the second. The Predators, after adding free agent forward Matt Duchene last off-season, are 11th in the Western Conference standings.

Dallas, hitting the halfway point of its regular season that began with a horrendous 1-7-1 start, is third in the conference after consecutive comeback wins (over Colorado and Arizona).

“It shows great character of our team that we are able to come back. This is a tough league and it’s not going to happen every night that you can come back in the third period,” Stars interim head coach Rick Bowness said. “We do not want to do this again on Jan. 1. If we have to, we know we can.”

The Stars are 5-3-1 since second-year head coach Jim Montgomery was fired Dec. 10 for unspecified unprofessional conduct.

With the calendar turning to 2020, Bowness moves into his fifth decade as an NHL coach. It will be the first outdoor NHL game for the 64-year-old Canadian, and it brings back memories of his dad building a rink in the backyard for winter games. He did the same for his children – all grown and in attendance this week – when he landed his first head coaching job with Winnipeg.

“We didn’t have a lot of rinks back then. So if you wanted to play hockey, you skated outside,” Bowness said. “This is something that my dad would absolutely love.”

The largest crowd to see an NHL game was 105,491 at Michigan Stadium five years ago when Toronto beat Detroit in a shootout at the Winter Classic. A crowd of 76,126 was at Notre Dame Stadium last New Year’s Day when Boston beat Chicago, 4-2.

NHL officials said about 20,000 tickets have been purchased by fans for the visiting Predators, whose jerseys were inspired by the 1960s and 1970s jerseys of the Dixie Flyers, the first minor league hockey team in Nashville.

The Stars will wear green and white jerseys with elements of the 1993-94 Stars, the first season in Dallas, and the 1945-46 USHA Dallas Texans, the first minor league team in Dallas.

Weekend rain and temperatures near 70 created quite a puddle at the Cotton Bowl, forcing crews to redo logos and lines. It has cooled off since then and it could be near freezing overnight into New Year’s Day. Conditions at game time were forecast to be cloudy with temperatures between 10 to 13 degrees – about average for a January day in North Texas. 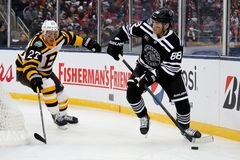