Want to make some American hockey goaltenders laugh? Ask how much instruction they received while growing up.

For those whose careers finished by the year 2000, the most common answer is little to none. Coaches largely ignored them. Clinics, when they actually took place, were limited to one week in the summer.

Bob Mason, the Minnesota Wild’s goalie coach, grew up in hockey country – International Falls, Minn. – and said he got all the way to the NHL in 1984 before anyone actually coached him on technique.

“The way I learned in high school was copying the guys in front of me,” Mason said of a group that included Kevin Constantine, who went on to become an NHL head coach. “That was my video.”

To some degree, things have changed in the 21st century. By last season, American players accounted for 23.54 percent of the goaltending minutes in the NHL, according to QuantHockey.com. That is a huge jump from 2007-08, when the figure was 11.45 per cent. But USA Hockey officials have a fanciful target in mind: 51 in 30, or American goalies playing 51 per cent of NHL minutes by 2030.

The person at the center of this goal is Ron DeGregorio, who was president of USA Hockey from 2003 to 2015.

“In everything we did, I always wanted to have a goal we could measure, something that would be a reach but attainable,” DeGregorio said in a telephone interview from Salem, N.H., where he lives. “We really wanted to focus on minutes because that was a measure of excellence in our training – in my view, anyway.”

It was DeGregorio, a former college goaltender himself, who eventually began to push for more robust goaltending instruction from youth coaches within USA Hockey’s development programs. Giving every coach two or three goalie drills to run before practices would help, he thought, along with promoting goaltending as a cool position to play.

The growth of American goaltending schools over the last 15 years has helped some players – but generally, the ones whose parents could afford to pay for the tutoring. American goalies such as Tim Thomas and Jonathan Swift were winning Vézina and Conn Smythe trophies in the NHL, but over all, youth-level coaching for goalies was still hit or miss, particularly for young goalies from families of modest means.

Ultimately, USA Hockey officials want a coach on every youth staff who is qualified to teach goaltending. So, in line with DeGregorio’s thinking, USA Hockey, in the last few years, began hiring goalie-development coordinators for each of its 34 affiliates. It has also created a goalie-coach development program and posted instructional webinars and videos of goalie drills on its website and mobile app.

“We wanted to remove that stigma behind, ‘I can’t coach goalies because I didn’t play goalie,’ or, ‘I’m not going to talk to them because I’m afraid to mess them up,’” said Phil Osaer, who presided over the youth-goaltending program for USA Hockey from 2015 until a few months ago, when he took a job scouting for the Tampa Bay Lightning.

“We started the rhetoric of, if you’re a hockey coach, you have to coach all of your hockey players,” Osaer said. “And goalies are just hockey players.”

Goalie coaches were largely unheard-of in the United States until Herb Brooks hired Warren Strelow, a buddy from St. Paul to help him at the University of Minnesota in the 1970s. Brooks added Strelow to the 1980 U.S. Olympic staff, and the team’s unexpected gold medal legitimized the concept.

Three years later, the Washington Capitals hired Strelow as the NHL’s first full-time goalie coach, and he went on to work for the New Jersey Devils and San Jose Sharks before his death in 2007. USA Hockey’s national team goaltending camp is named for him.

Recent goaltending prospects like Spencer Knight, who will start for the U.S. national team at the world junior championship that began this week in British Columbia, have benefited from a more specialized path. Raised in Darien, Conn., Knight switched from forward to goalie as an 11-year-old. A fan of Henrik Lundqvist and the New York Rangers, he liked the pressure that came with the position. And he loved the equipment. “I thought the gear was really cool,” he said.

His parents – Chris, a retired Darien police officer, and Lilly, who works in finance – sent him to Pro Crease Goaltending, a goalie school in East Berlin, Conn.

“My parents laid out a lot of money,” he said. “I’m very fortunate my parents were wiling to pay for that and let me fulfill my dream of playing goalie.”

Knight excelled at the All-American Prospects Game in St. Paul in September, stopping 12 of 13 shots and twice foiling Jack Hughes, the likely No. 1 overall pick in the 2019 NHL amateur draft.

Now Knight is bound for Boston College and is a potential first-round draft choice himself.

That is heartening news for USA Hockey, which must also confront another issue as it seeks to bolster the number of good American goalies. And that is the fact that goalie equipment is expensive. A full set of new pads, plus a mask, can cost US$500 or more for the youngest players and upward of US$2,000 for an adult. USA Hockey is working with equipment manufacturers on that front, too, trying to find cheaper alternatives.

One person who likes this stepped-up emphasis on goalies is Jamie Langenbrunner, a two-time Stanley Cup champion forward who is now the player-development coordinator for the Boston Bruins.

“It’s such a specialized position,” said Langenbrunner, who coached Knight’s team in the Prospects game. “The skill, the teaching of it, is difficult. I’ve been in hockey for a long time and I couldn’t tell you the first thing about teaching a goaltender. We’re working on it. We’ve done all right, but to continue working on it is great.” 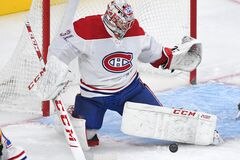 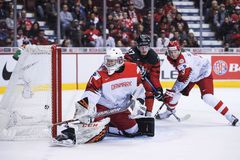 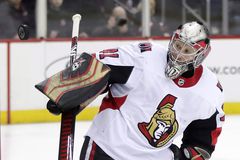