The NHL is about to embark on a season unlike any other, with schedules shortened by a pandemic, a state of emergency in Ontario and one club already watching from the sidelines temporarily owing to an outbreak of COVID-19.

All but three of the 31 teams – the Arizona Coyotes, Dallas Stars and Florida Panthers – will play without spectators. The Tampa Bay Lightning planned to welcome a limited number, but reversed course in the past few days after a surge in cases of the novel coronavirus.

Ottawa owner Eugene Melnyk announced on social media Tuesday that he had brokered an agreement to allow 6,000 fans to attend Senators home games, then backtracked quickly after provincial health authorities issued a stay-at-home order for everything but the most essential reasons.

A hockey-mad country will entertain itself by watching its seven teams in five provinces compete in an all-Canadian North Division that was established this year owing to border restrictions. Every night will be hockey night in Canada now, with old foes playing one another as often as 10 times as they battle for four playoff spots.

“It’s terrible that this is the result [of a pandemic],” Paul Maurice, the head coach of the Winnipeg Jets, said this week. “But you couldn’t dream of anything better.”

The Maple Leafs commence the 2021 season at Scotiabank Arena on Wednesday with an encounter with the Montreal Canadiens. The traditional rivals each made significant roster changes during the off-season, with Toronto bringing in veteran forwards Joe Thornton and Wayne Simmons and defencemen T.J. Brodie and Zach Bogosian, and Montreal strengthening its offence with the addition of Tyler Toffoli and defence with Joel Edmundson.

“With the moves they have made, they look as good as any team we are going to face,” said Sheldon Keefe, who is starting his first full season as Toronto head coach.

The Maple Leafs are banking on a breakthrough with help from newcomers and an improving core of young stars led by Auston Matthews and Mitch Marner. Schedules have been abbreviated to 56 games, and each team will be allowed to carry 23 players because of the threat posed by COVID-19.

“I am excited to get back at it,” John Tavares, the Toronto captain, said. “It’s another year and another opportunity to compete for the Stanley Cup. It’s going to be different [though]. We are going to deal with a lot of things we never have before. We’re going to have to adapt.”

The Maple Leafs last won a playoff series in 2004 and a Stanley Cup in 1967. They failed to reach the playoffs last year after losing in the first round in the three preceding seasons.

Keefe replaced Mike Babcock behind the bench after the team won only nine of its first 23 games. It did begin to play better but was eliminated by the Columbus Blue Jackets from the play-in tournament that was held before the postseason.

More is expected, but that has become an all-too-familiar refrain in Toronto.

“We have goals like all teams,” Brendan Shanahan, the president and alternate governor of the Maple Leafs, said Tuesday. “Just about every team is competing to win the Stanley Cup. You just keep going back to the well and keep trying.

“If you look at the dynasties in all sports, you see that some of [them] went through growing pains first.”

The rejigged Canadian division will help rekindle old rivalries and ignite new ones.

The Tkachuk brothers – Matthew of Calgary and Brady of Ottawa – will face one another nine times. The Flames, who lost in the first round last year to the Stars, could make a strong bid to win the North Division thanks to the signing of free-agent goalie Jakob Markstrom.

Edmonton cannot be counted out with a lineup that sports Leon Draisaitl and Connor McDavid, the league’s top scorers in 2019-20. They also added defenceman Tyson Barrie, who will be called upon to quarterback the NHL’s top power-play unit.

Barrie struggled somewhat with the Maple Leafs last year, and looks to regain the scoring touch that he showed while playing for the Colorado Avalanche with Nathan MacKinnon.

“We’re getting better every day,” Barrie said this week. “We’ve got some skill up front, and we have good depth on the back end. In a year where there are lots of questions and where we are going to need lots of bodies, the deeper the better.”

Matthews, who finished third in the NHL with 47 goals, will see Connor McDavid four times in the first 10 games of the season, and nine times over all.

The entertainment possibilities are limitless.

“There is tension between a lot of Canadian teams,” McDavid said. “You’ll definitely see that.”

Edmonton opens with back-to-back games against the Vancouver Canucks, who put together a nice playoff run last year before being knocked out of the Western Conference semi-finals by the Vegas Golden Knights.

Vancouver has exceptionally talented offensive players in Elias Pettersson and Bo Horvat, one of the game’s most promising young defencemen in Quinn Hughes, and a top goalie in Braden Holtby, who came from Washington to replace Markstrom. The Canucks also added two solid defenders in Travis Hamonic and Nate Schmidt.

Winnipeg is backstopped by the Vézina Trophy winner in Connor Hellebuyck, and has top scorers in Patrik Laine, Kyle Connor and Mark Scheifele.

Ottawa is likely to be much improved, but is in tough against this type of competition.

All of Canada’s teams are poised now to go forward in the great unknown. Training camps were brief. There were no true exhibition games.

It could be great, but COVID-19 looms over everything. 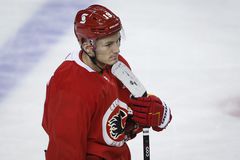 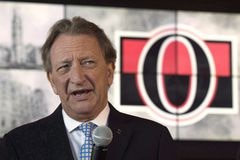 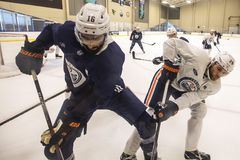