Todd McLellan was beginning to worry about his Los Angeles Kings doing the right things but not getting the desired results for their hard work. The first-year coach can breathe a little easier now.

The Kings played one of their most complete games of the young season with a 4-1 victory over the Calgary Flames on Saturday night to snap a three-game losing streak.

“You eventually get concerned about the guys giving what they have and not getting rewarded. Will they begin to cheat, take shortcuts or wander from the program? They didn’t do that and that’s a good sign,” McLellan said.

Jeff Carter, who was one of seven Kings to get on the scoresheet, led the way with a goal and assist while Jonathan Quick made 23 saves for his first victory in four starts.

Tyler Toffoli, Anze Kopitar and Ilya Kovalchuk also scored for the Kings, who put the game out of reach with a three-goal second period.

Quick was on track to get a shutout until Mikael Backlund scored on a penalty shot with 2:10 remaining.

“We played great. We did a good job taking away their main threats along with winning faceoffs,” Quick said.

David Rittich, who came in with a 2.55 goals-against-average, allowed four goals on 28 shots in two periods. Cam Talbot came in for the final 20 minutes and made eight saves for the Flames, who have dropped three straight road games.

“I think our first period was ok. It is a tough building and we were down one goal,” Calgary defenceman Travis Hamonic said. “It was probably in the first seven or eight minutes of the second period where the game got away from us. We need a better pushback from the group.”

Toffoli scored 75 seconds into the game to end the goal drought at 136 minutes, 51 seconds. The Kings’ centre got the puck on a pass from Blake Lizotte just outside the Calgary zone, made a nice move past two Flames defenders and put a wrist shot past Rittich for his third goal of the season. It was only second time this season the Kings scored first.

“If we’re going to start a game, that’s the best way to do it,” McLellan said. “You could kind of feel a little bit of relief on the bench and then it was time to go back to work and the guys built off of it. We needed it and finally got rewarded.”

Carter got his first goal of the season 15 seconds into the second when his backhand went off the skate of Calgary defenceman Mark Giordano and found its way into the net.

Kopitar scored the Kings first short-handed goal of the season five minutes later when he beat Rittich on his glove side on a breakaway. Los Angeles came into the game with the league’s second-worst penalty-kill unit but was 5 of 5 against the Flames.

Kovalchuk then added a power-play goal at 8:58 with a slap shot from just beyond the left faceoff circle after a cross-ice pass from Michael Amadio. It was the Kings’ first goal with the man-advantage in six games and snapped skid where they were 0 for 19. It is also the third goal of the season for Kopitar and Kovalchuk.

“For us today the scoring was great, but the checking was better and that allowed us to play with a lead,” McLellan said. “I thought for tonight 52 minutes of our play was good. Then with eight minutes we strayed from it. We still have a lot to learn from it. We still see old habits slip in. There are things that need to be addressed and fixed.” 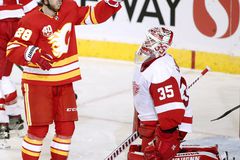 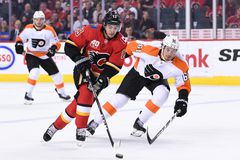