Good as it is, Winnipeg’s hockey team is unable to give itself any breathing room during the playoffs.

The Jets missed a chance to put Vegas in a precarious position Monday night. After winning the first game in the third round of the Stanley Cup playoffs on Saturday, they dropped Game 2 to the Golden Knights 3-1 at Bell MTS Place. The best-of-seven series resumes Wednesday on the floor of the Mojave Desert.

The champion of the Western Conference will play against the winner of the Eastern Conference matchup between Washington and Tampa Bay. The Capitals won both games in Tampa and look to put a stranglehold on that series at home Tuesday night.

Tomas Tatar put Vegas ahead with 6:37 left in the first period, and Jonathan Marchessault added another four minutes later.

It was all the visitors would need on a night where Vegas goalie Marc-André Fleury was both lucky and good. The Jets banged pucks off the posts and the crossbar, and the cornerstone of the NHL’s newest franchise ignored the chants that followed from Winnipeg’s boisterous crowd, finishing with 30 saves.

The Jets didn’t lose for lack of opportunities. They just missed them. The Golden Knights converted theirs – and early. It allowed Vegas to buckle down on defence and force the Jets to chase the game – the same dilemma the Golden Knights could not solve in Game 1.

Vegas weathered a blistering attack by Winnipeg at the outset. Fleury was peppered with shots and stopped five dangerous ones in the first three minutes. Nikolaj Ehlers, who has yet to score in postseason, had a backhand bounce off the left post 90 seconds into the game.

Tatar’s goal was his first in the playoffs. The left winger missed an open net from two feet away, clanking the puck off the right post. He then fought to control the rebound and jammed the puck past Connor Hellebuyck. Marchessault later beat Winnipeg’s Vezina Trophy candidate with a backhand.

The rough stuff that predominated in Game 1 continued. Marchessault and Jakob Trouba were sent to the penalty box after a tussle behind the Jets’ net midway through the first period. Near the end of the second, Dustin Byfuglien and Ryan Reaves clashed in a scrum around Hellebuyck.

A tripping penalty on Brayden McNabb in the dying seconds before the second intermission gave hope to the Jets and their white-dressed fans. They had almost a full power play with which to carve into the Vegas lead. A wrist shot by Kyle Connor from a challenging angle squirted through Fleury, and it was suddenly 2-1 with 12:43 left.

And then, just as suddenly, it was 3-1. A minute and a half later, Reilly Smith pounced on a puck that squirted loose in the Jets end and passed to Marchessault, who scored for the second time.

The Golden Knights talked at length for two days about the need for a fast start. The Jets scored three goals in the opening 7:35 of Game 1 and cruised to a 4-2 victory. They are 8-1 at home in the postseason when they score first.

“We have to make sure we respond tonight and play our best game," Golden Knights coach Gerard Gallant said after the morning skate. “Everybody has to be more competitive. We can’t get behind this team 3-0.”

The Jets entered the night with 37 home victories, six shy of the NHL record for most combined home wins in a season. They were also trying to win two in a row at their home rink for the first time since the opening round.

They swapped victories with the Predators for seven games in Round 2 and lost twice on their home ice. They took an unusual route to the conference final, winning three times in Nashville, including Game 7. They are only the second team in NHL playoff history to win on the road in a seventh game after being shut out at home in Game 6. The Maple Leafs accomplished the feat against the Red Wings in 1945 to capture the Stanley Cup.

The downtown arena in Winnipeg claimed more victims than any other in the league this season. The Jets have only lost 10 times at home in regulation from opening night to now and had won 14 of the previous 16 at Bell MTS Place.

“You can’t lose your first two games in the playoffs, especially against a team like this,” said Marchessault.

Coming off a series full of fits and starts, the Jets could not count on carrying any momentum into Monday night.

“I’m not much of a believer in momentum during the playoffs,” said Paul Maurice, the Winnipeg coach. “It changes every time the puck drops.”

The Golden Knights captured the Western Division title in their expansion season and started the playoffs by winning eight of 10. They are only the third major sports team to complete a four-game sweep in their first postseason series and the only one to do it in their inaugural year.

“You can’t worry about whether you lost the last one or won,” Gallant said. “It has no implication on the next game. It is over with. You move on and get ready for the next one.”

The Golden Knights are banking heavily on Fleury to carry them through to the next round. He had four shutouts during series’ wins over Los Angeles and San Jose and a .951 save percentage through 10 games – the highest for any goalie in playoff history.

The Jets got to him for four goals on 26 shots in their Game 1 victory, the fourth time in the past five games where he had given up three goals or more.

‘Gift to be a part of this community’: Jets fever spreads, well beyond Winnipeg
May 14, 2018 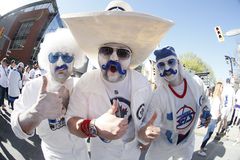 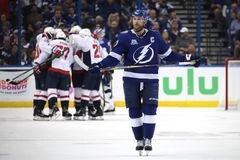 For Jets goalie Connor Hellebuyck, a year has made all the difference
May 14, 2018 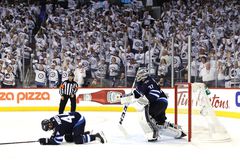