Paul Maurice got ringing endorsements Thursday from his players and boss after he signed a multiyear contract extension this week to remain head coach of the Winnipeg Jets.

They praised his communication skills, his willingness and ability to adapt to roster changes, and his overall evolution as a coach and person.

“He’s been around in the league for a long time so he kind of knows what he’s doing. He’s a really, really good guy around the locker-room and to everybody, and just happy to have him here.”

That’s not always the same opinion as some fans, who often call for Maurice’s head when the team goes through slumps because they think his message to players or his coaching skills have become stale.

“When we go through bad stretches, it’s on all of us. It’s not on the coach, it’s not on one player, it’s on everyone.”

Maurice joined the Jets midway through the 2013-14 season to replace Claude Noël after his firing, and has a 264-186-53 regular-season record behind Winnipeg’s bench. He’s guided the team to the playoffs three times, including a run to the Western Conference final in 2018.

The Jets (29-24-5) sat one point out of a wild-card spot in the Western Conference heading into Thursday’s NHL action. They had five-game losing skid last month, but have since gone 4-1-1 and play host to San Jose on Friday.

Winnipeg general manager Kevin Cheveldayoff, who wouldn’t divulge the length of Maurice’s extension, told reporters he’s not one to think of shaking things up with a coaching change when things aren’t going well.

“This isn’t an industry that really gets fixed by knee-jerk reactions, or by just appeasing the moment and saying, ‘You know what, let’s just do this,' “ Cheveldayoff said.

“Because, again, you really pay the price. ... You might get some instant relief or instant gratification from different areas, but I really do believe when you make a knee-jerk reaction, you really open yourself up to long-term problems.”

He said Maurice, 53, has handled a season that was difficult right from training camp.

Veteran defenceman Dustin Byfuglien took a personal leave on the eve of camp that’s still continuing and the team already had defencemen leave in free agency. Then came injuries, including a long-term one to veteran centre Bryan Little, who’s still out, and more recently to forwards Adam Lowry and Mathieu Perreault.

“Obviously, we live in a much more open world when it comes to analytics and the different situations that coaches are faced with on a nightly basis,” Cheveldayoff said. “To see his approach, to see how he embraces different things, his openness to continue to try to evolve, to try to learn, to try to become a better coach and a better person, and all along maintaining some of his best traits as far as communication. ... So it’s a combination of a lot of things and an evolution of a good coach that is staying true to his roots, but evolving with things overtime as well.”

“He’s not afraid to do something big,” the fifth-year netminder said. “The routine we have this year is some next-level stuff. It’s a little different than the rest of the league and it’s working very well for us.

“We have optional morning skates, not really forcing us in there. Practising in between and getting some work done, and not bagging us for an hour and a half. Getting to speed and getting what we want to get done, so he’s grown his game.”

Maurice also used the word evolve when talking about why Winnipeg remains a good fit for him.

“Certainly, we all have our principles and our beliefs in the game, but you have to be able to add things to your game, to change the way you view players, to evolve,” he said. “That’s the word, that’s the most important thing.”

Blake Wheeler didn’t take part in Thursday’s practice. Maurice said the Jets captain was feeling “under the weather,” and a decision about whether he plays will be made Friday. 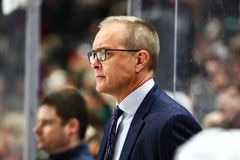 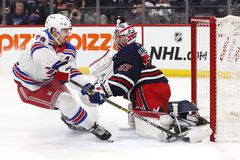 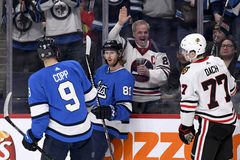