It is one of the facts even the best teams face this time of year. Despite having a great season, the chances of capturing a Stanley Cup at some point grow dim.

The Jets sit in that position today after a tough 3-2 loss at the T-Mobile Arena in Las Vegas on Friday night. They now trail the Golden Knights 3-1 in the best-of-seven Western Conference Series. The task ahead is unenviable. To survive, they must win three in a row against an opponent that has beaten them three times in four chances thus far.

Not impossible, but highly improbable.

The victory leaves Vegas, an expansion team, one win shy of reaching the Stanley Cup finals. They can get there by beating the Jets back in Winnipeg on Sunday afternoon.

Reilly Smith scored the winner on a breakaway with 6:58 left in the third. Winnipeg’s Dustin Byfuglien muffed a shot near the blue line, and the speedy winger outraced two Jets players and deposited a wrist shot past Connor Hellebuyck.

It is the first time the Jets have lost three games in a row, and spoiled what looked to be a sensational comeback. They trailed 1-0 and 2-1 before tying it on a shot by defenceman Tyler Myers dribbled through Marc-André Fleury’s legs. The shot fooled the goalie and everyone else; officials didn’t initially realize it had gone in, and neither did Fleury.

The Jets fell behind at the outset for the third straight time. An interference penalty on Tyler Myers gave Vegas a power-play less than two minutes in, and William Karlsson converted quickly, his shot fluttering by Hellebuyck like a Phil Niekro knuckleball.

It was nearly five minutes before Fleury faced his first shot, but the most popular guy in Las Vegas, aside from Wayne Newton, was as sure-handed as usual. He stopped a a hard wrister by Patrik Laine from the point about midway through the first, and had 10 saves by intermission.

Before the game, a moment of silence was held for victims of the school shooting in Santa Fe, Texas. Few would understand the pain being felt there as well as Las Vegas residents still shaken grieving after 58 people were killed by a gunman on Oct. 1.

The Blue Man Group was in the crowd, and so was Newton. The singer helped crank up the noise inside the arena in the moments before the puck was dropped. Neil Diamond was not on hand, but fans sang along to Sweet Caroline anyway, changing the chorus to “Sweet Golden Knights.” On woman held a sign that read, “My Cup size is Stanley.”

Both teams were 8-1 when scoring first in the playoffs. The Jets jumped out to a 3-0 lead in their Game 1 victory, but could not catch up when Vegas got ahead early in Games in Games 2 and 3.

This time they tied it a1-1 when Laine whistled a shot past Fleury during a power-play with 10:52 left in the second period. Vegas struck back 42 second later, when Tomas Nosek tucked one around Hellebuyck after the goalie failed to collar a shot.

For three games in a row, The Jets have found themselves having to climb a mountain to get back in games. When they do or get close, the peak suddenly becomes higher.

The loss in Game 3 left the Jets trailing in a playoff series for the first time. Now the deficit is probably insurmountable.

“There should be urgency in every game,” Mark Scheifele said beforehand. The Winnipeg centre entered Game 4 with 14 goals in 15 postseason games. The last player to score more in a single postseason was the Penguins’ Sidney Crosby, who had 15 in 2009. “We are down 2-1, and on the road. There has to be desperation in our game.”

They played like it, and even carried the play, but still failed to beat the upstart Golden Knights. They rolled through the first two rounds and appear ready to dispatch with the Jets, too.

They had stunned Winnipeg with a goal by Jonathan Marchessault 35 seconds into Game 3. When the Jets fought back to tie it, it took Vegas only 12 seconds to respond. James Neal, who had 20 goals in nine straight seasons before being made available by Nashville in the expansion draft, put the Jets ahead for good.

Fleury, meanwhile, has played marvellously. He stopped 33 of 35 shots on Wednesday and 36 on Friday night. The former Penguins goalie, also let loose via expansion, is in the midst of the best postseason of his career.

He is a joy to watch in the net, diving, flopping, smiling with each big save. During a scrum on Wednesday, he even reached out and tickled the back of Wheeler’s left ear.

“I didn’t even know he did it until one of my teammates showed it to me on breakfast the next day,” Wheeler said Friday. “I didn’t clean my ears that day so the joke’s on him.”

Fleury earned three Stanley Cup rinks as a goalie for Pittsburgh, and has four shutouts in the postseason already. That is the most since 2011, when Vancouver’s Roberto Luongo and Boston’s Tim Thomas each also had four. He entered Game 4 with a goals-against average of 1.70 and a save percentage of .945 through 13 games this postseason.

He was the most prized player in the expansion draft, but he shares in the indignity of being jettisoned by his previous team. The Golden Knights have used it as motivation from the beginning.

“We all came here with a great mindset,” Neal said. “No one wants to be left unprotected. Whether you have three Stanley Cups or it’s your first time in the playoffs, everyone has something to prove.”

Scheifele scored both of Winnipeg’s goals in Game 3 to extend his playoff-leading total to 14. He has scored 11 times on the road, which is an NHL record in postseason.

Marchessault scored twice in each of the past two games and leads all Golden Knights players with 17 points on eight goals and nine assists. He has nine points over the last five games, which matches a record by a player in his team’s first postseason appearance.

Too much time in the penalty box costs the Capitals
May 18, 2018 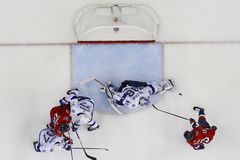