Montreal
The Canadian Press
Published October 9, 2019 Updated October 10, 2019
For Subscribers
Comments
Please log in to listen to this story. Also available in French and Mandarin. Log In Create Free Account

Sabres newcomer Marcus Johansson has quickly gained an appreciation of how captain Jack Eichel can take over a game.

The off-season free agent addition was wowed by Eichel’s two second-period goals, including one on an individual rush against three Montreal defenders. And then Eichel had a hand in setting up Johansson scoring 1:30 into overtime of a 5-4 win over the Canadiens on Wednesday night.

“He can be so dominant. He can take over the game,” Johansson said of Eichel. “What he can do with the puck with the size he’s got, it’s impressive to watch. It’s fun to watch up close.”

The two-goal, two-assist outing was the least Eichel said he could do in sweeping away the frustrations from an off-night in a 4-3 overtime loss at Columbus on Monday.

“The other night was frustrating for a lot of us, especially myself,” Eichel said. “So it was important for our group to come back and play well at home.”

Eichel particularly wowed the crowd by putting Buffalo ahead 3-2 late in the second period.

Circling with the puck inside his zone, Eichel eluded Tomas Tatar’s check at his own blue line and then built up a head of steam driving through the neutral zone. With Ben Chiarot and Jeff Petry backing up, Eichel fired a low hard shot that sneaked in under goalie Keith Kincaid.

The Sabres endured their lapses by squandering a 4-2, third-period lead. And yet, they persevered by improving to 3-0-1, their best start since opening the 2009-10 season at 4-0-1.

Joel Armia scored twice and added an assist, while Jesperi Kotkaniemi and Chiarot, with the tying goal with 7:06 remaining, also scored for the Canadiens (1-0-2).

Kincaid stopped 34 shots, including getting his right pad out to stop Skinner redirecting Johansson’s pass into the crease with 2:51 remaining.

“We fell asleep in the second period. They were harder on the puck than we were, and we were a bit soft,” Canadiens coach Claude Julien said. “If you want to be a good team, those things can’t be a part of your game.”

The game was decided just as Montreal’s Phillip Danault exited the penalty box while serving a slashing penalty.

Eichel’s shot from the slot was blocked by Chiarot and the puck dribbled to Sabres defenceman Colin Miller in the left circle. Miller immediately slid a pass to Johansson, who swept it into the open side from the right circle.

“The plan we had didn’t quite work out, I mean, we didn’t execute it right,” Johansson said of a 4-on-3 man-advantage that failed to register a shot on net before he scored. “But we stuck with it and I think we got a little bit of a lucky bounce. That’s what happens when you shoot the puck.”

Buffalo’s power play continued its dominance by converting two of five opportunities. It entered the game tied for league lead in converting 60 per cent of their power-play chances (6 of 10).

The Canadiens have rallied from multi-goal deficits in each of their first three games.

Montreal was coming off a 6-5 shootout win at Toronto on Saturday in which the Canadiens rallied from a 4-1 deficit. The Habs were down 2-0 in a season-opening 4-3 shootout loss at Carolina last week.

“We haven’t been able to play a full 60 (minutes),” Armia said. “I think when we get everybody going the full 60, we’re going to be a dangerous team.”

Olofsson capitalized on Buffalo’s first opportunity with a one-timer off Eichel’s pass into the right circle to open the scoring 5:04 into the first period. The 24-year-old Swede’s power-play goal streak dates to the two he scored in two games last season. ... Winnipeg’s Craig Norwich in 1979-80, Hartford’s Sylvain Turgeon in 1983-84 and Islanders’ Jeff Norton, from 1987-88 to 1989-90, also scored their first six career on the power play. ... Sabres LW Conor Sheary’s timetable for recovering from an upper body injury has increased to week to week from day to day after he was hurt in a 4-3 overtime loss at Columbus on Monday. ... Canadiens placed F Michael McCarron on waivers after sitting out each of Montreal’s first two games. 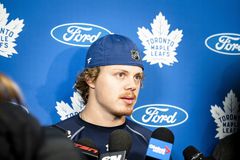 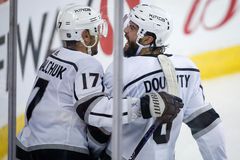