Josh Bailey didn’t have much time to think when he saw the puck on the side of the crease after Mathew Barzal’s try hit the left goalpost in overtime. Bailey just swooped in and knocked it into the net to send the New York Islanders home with a win.

Bailey scored at 4:39 of the extra period and the Islanders beat the Pittsburgh Penguins 4-3 on Wednesday night in the opener of their Eastern Conference first-round playoff series.

“It just happened so quick,” Bailey said. “I wasn’t sure. It didn’t lay very flat for me. I was just trying to whack it and hope it went in. … A crucial game. There’s still a long way to go, but a good win for us.”

Barzal had brought the puck into the offensive zone on a 2-on-1 break, faked in front to draw Matt Murray out and sent the backhand shot that bounced off the left post. He was initially upset with himself at missing the opportunity before he saw Bailey come up and put it in.

“I see the puck laying there and I was just obviously (angry), I thought the chance had ended,” Barzal said. “And I see Bails come in and swoop in and bury it. I was obviously super happy to see that. Awesome for him. First game and that’s nice for the confidence.”

Jordan Eberle had a goal and an assist, and Brock Nelson and Nick Leddy also scored for New York, which was opening a post-season series at home for the first time in 31 years. Robin Lehner stopped 41 shots.

Game 2 is Friday night back at the Nassau Coliseum.

Phil Kessel and Evgeni Malkin each had a goal and an assist, and Justin Schultz also scored for the Penguins. Murray finished with 29 saves.

“It was a hard-fought game,” Pittsburgh coach Mike Sullivan said. “It wasn’t perfect out there by any stretch, but I thought we played hard.”

Tom Kuhnhackl, who had a goal in the opening minute of the game waved off for offside, nearly won it for the Islanders 1:12 into the extra period as he crashed into Murray and the puck crossed the goal-line – but not before the net came loose. The no-goal was confirmed after a review.

The Islanders led three times in regulation with the Penguins managing to tie it each time.

“We just stayed to it,” Islanders coach Barry Trotz said. “I liked our composure on the bench. There were a lot of twists and turns to that game. … (We) didn’t flinch at all.”

Leddy gave the Islanders a 3-2 lead with 7:25 left in the third as he sent a long shot from left point at the blue line that knuckled past Murray.

With Murray pulled for an extra skater, Schultz fired a one-timer from the left circle inside the left post with 1:29 left.

Bailey had a chance at the winner for the Islanders in the closing seconds, but his shot hit the right post. He was glad it didn’t end up being a costly miss.

“I was afraid I was going to have to see that in my nightmares for a while,” Bailey said. “Yeah, a little bit of redemption. Just happy to get the win.”

Malkin tied it 2-2 on a power play with 6:19 left in the middle period as his shot from the inside edge of the right circle deflected off Islander defenceman Adam Pelech’s stick and up past Lehner.

The raucous crowd that was chanting “Let’s Go Islanders!” from before the teams came out for pregame warm-ups, roared when the Islanders stepped on the ice and booed loudly when the Penguins followed. They got loud again in the minutes before the teams emerged from their dressing rooms for the start of the game.

Pittsburgh outshot New York 17-12 in the first period, but the Islanders led 2-1 after 20 minutes.

Just more than a minute after Kuhnhackl’s opening-minute goal was overturned, Eberle did give the Islanders the lead as he stopped a deflection of Pelech’s shot, turned and beat Murray through the five-hole from the right side for his first career post-season goal at 1:40.

The Penguins tied it when Dominik Simon brought the puck down the middle and dropped a pass back to Kessel, who put it past Lehner off the post and in at 5:42.

Nelson put the Islanders back in front on the power play as he got a pass in front from Eberle and put it past Murray with 4:14 left in the opening period.

NOTES: Malkin, Sidney Crosby and Kris Letang are the only Penguins players remaining from the 2013 playoff series against the Islanders. New York has five players left – Nelson, Josh Bailey, Casey Cizikas, Thomas Hickey and Matt Martin. … Kessel also scored in each of the last three games during the regular season. … Malkin’s goal was his 63rd in the playoffs, breaking a tie with Bobby Hull for sole possession of 26th place on the NHL’s career list.

Game 2 is Friday night before the series shifts to Pittsburgh for Games 3 and 4.

Opinion
Winnipeg Jets drop Game 1 to the Blues in battle of the goaltenders
Subscriber content
April 11, 2019 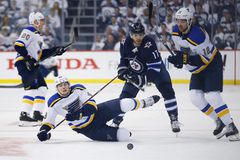 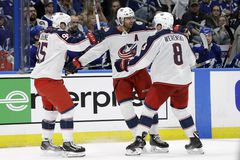