Kasperi Kapanen was a baby when he moved from Finland to Connecticut, where his father, Sami, played for the Hartford Whalers. Thanks to his dad’s NHL career, the youngster grew up a hockey brat. As a kid, he moved from Hartford to North Carolina for six years, and then to the New Jersey suburbs for five when Sami was traded to the Philadelphia Flyers.

“I was born to do this,” Kapanen says as he takes a seat in the Maple Leafs dressing room. Wednesday’s practice has just concluded, he has taken a dip in the whirlpool and appears very much relaxed. "I was running around at home and raising hell with a stick in my hand before I was even one year old.”

He is 23, and living a dream. He is a left wing in the centre of the hockey universe. He plays on a line with John Tavares and Mitch Marner. Both churn out points like Saputo makes cheese. Kapanen will have no shortage of opportunities to score this season. The next game is Thursday night at Scotiabank Arena against the Tampa Bay Lightning.

As great as playing in Toronto is, occasionally a player finds the crosshairs. Kapanen attracted unwanted attention after hurling a broken stick at Montreal’s Jeff Petry on Saturday night. It would have been a comic blooper-reel moment had Petry not scored on an ensuing penalty shot and had the Maple Leafs not lost after blowing a three-goal lead.

“It kind of happened out of frustration,” Kapanen says. “I had been out there killing a penalty for a while and was tired. I felt bad because it really hurt us, but thankfully it was the third game of the season and not a do-or-die situation in the playoffs.

“I have been trying to forget about it, and even had a chuckle over it with my parents the next day. You have to live and learn.”

The season is young and it has been eventful but not fruitful thus far for Kapanen. He has yet to register a point, even if he earned a medal for his weekend javelin throw.

“As a team, the first four games for us have been good, but I haven’t had the start that I wanted,” he says. “I want to be better. Sometimes you go through rough patches and just have to play your way out of them.”

Hockey has come easily for him until now.

He was 18 in 2014 when he was drafted by Pittsburgh in the first round. The following summer, the Penguins traded him to Toronto in the multiplayer deal that also included Phil Kessel. Kapanen was the youngest player in the AHL when he made his debut that fall with the Marlies, and a few months later was called up for the first time by the Maple Leafs.

He began the 2016 season in the minors but was recalled by Toronto in the run-up to the postseason. He dazzled fans and the organization by scoring twice in six games in the playoffs, including a winner in double-overtime against the Washington Capitals.

After beginning the year in the AHL again in 2017, he was called up and got his first extended period of playing time with the Maple Leafs and scored short-handed during the first round of the Stanley Cup.

He spent the entire season in the NHL last year and, with William Nylander holding out and then struggling, played an increasingly important role. He finished with 20 goals and seemed poised for a breakthrough season.

The Maple Leafs are 2-1-1 through four games with a tough contest looming against Tampa Bay. The Lightning was the league’s best team in 2018-19 during the regular season and ranks among the Stanley Cup contenders this year.

“They have been a powerhouse for some time, now," Auston Matthews said. “There is a lot of talent in their dressing room. It is going to be tough.”

Toronto has lots its past two – the shootout defeat by Montreal and a 3-2 squeaker on Monday against the St. Louis Blues. It would be helpful to get a big game out of Kapanen. He hasn’t shown up much so far, but the Maple Leafs will be patient with him.

His dad had 468 points over a dozen seasons in the NHL and Kasperi is cut from the same cloth. The kid looks almost identical to his old man.

“I was lucky as a kid,” Kapanen says. “I would get to watch my father’s team practise and go to games, and would get to talk to the players. I was the coolest kid in my class. I would brag to my friends.”

After Saturday’s meltdown, Leafs face even tougher tests against Blues, Bolts this week 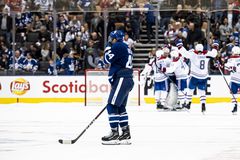 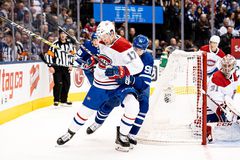