U2 blared over the sound system at the Ford Performance Centre on Tuesday, but for the Maple Leafs, it was anything but a beautiful day.

The team practised in the suburbs without its all-star goaltender Frederik Andersen, who sustained a neck injury during the defeat against Florida the night before.

Head coach Sheldon Keefe said Andersen, inarguably Toronto’s most invaluable player this season, would not accompany the team to New York for an engagement against the Rangers on Wednesday. He initially called Andersen’s condition day-to-day – and then did not.

“We don’t really know,” Keefe said quietly. He looked as gloomy as the grey winter sky, even though Andersen passed an evaluation for a concussion.

Although the big Dane has played erratically at times, his 24 wins are the second-most by any goalie in the National Hockey League entering Tuesday’s games. Over three previous years, nobody at his position played as many minutes or made more saves.

“It’s tough to lose him, but these things happen,” Keefe said.

With the Maple Leafs scuffling to reach the postseason, the injury could not have happened at a worse time. The loss to the Panthers dropped them out of a playoff spot for the moment, and the margin of error is razor-thin from here on out.

Andersen was hurt late in the first period when Florida’s Frank Vatrano charged toward the net with Toronto’s Jake Muzzin in close pursuit. Vatrano was knocked down and plowed into Andersen, who was initially slow to get up. He eventually climbed to his feet and remained in the game for the final 1 minute and 36 seconds of the period, but was replaced by Michael Hutchinson at the start of the second.

Hutchinson will do Andersen’s bidding on Wednesday. The good Michael has won four straight starts. The bad one lost seven in a row before that, and failed to hold a 3-1 lead after he replaced Andersen on Monday. The Panthers scored three times against him in the third period en route to a 5-3 victory.

There is no viable option other than Hutchinson unless the Maple Leafs make a trade. They recalled Kasimir Kaskisuo from the American Hockey League on Tuesday, but the Finnish rookie allowed six goals in his NHL debut earlier this season.

Hutchinson is friendly and valiant and a stand-up guy. Because of it, he makes it easy for teammates and fans to root for him. He is 29 and has always been a backup, standing in for Ondrej Pavelec and Connor Hellebuyck in Winnipeg and briefly for Roberto Luongo in Florida before he was dealt to Toronto for a draft pick in December of 2018.

He has filled in for Andersen for a little more than a year with modest success. He has a backup’s numbers – 50-51-14 – for his career.

“It doesn’t matter if you play every night or once every two weeks,” Hutchinson said in front of his dressing stall on Tuesday. “You just take it one day at a time. All you can do is try to get better each day.

“There is a lot you can’t control."

He has had more failure than success, but that comes with being a backup. Hockey has taken him from Barrie and London in Ontario to Reading, Pa., Ontario, Calif., Providence and St. John’s on his way to the NHL.

His is not a selfless task – he earns US$700,000 on a contract that ends after this season – but it can be gruelling if you lose too often.

Hutchinson is 4-8-1 this season with a 3.62 goals-against average and a .886 save percentage, which ranks among the worst in the league. Despite those struggles, he tries to stay positive and credits support from family and friends for helping him get through difficult times.

“I am hard on myself, but people around me have all been really amazing,” Hutchinson said. “I am able to leave the rink and put hockey behind me.”

He has been married for a year and a half. He met his wife, Jenna, through a friend when he played in Winnipeg. Jenna is a former goalie at the University of Manitoba.

“We hit it off, but it took me three months to get her to go out with me,” Hutchinson said. “She made me put in some work.”

The couple have a daughter named Lilah, nearly 10 months old. He has a tattoo of her handprint below his right wrist.

“Having the baby has helped a lot,” Hutchinson said. “She wakes up in the morning happy to see you, and when I am changing her diapers and feeding her there is no time to think about hockey. I just enjoy being in the present.”

Toronto hopes the good Michael, the one with a .939 save percentage over his past four starts, can carry them if need be.

“We’ve developed some real confidence when he has gone in as a starting goaltender," Keefe said. "In fact, some of the best starts we’ve had from our goaltenders have come with him in the net over the last little while.

“He is getting some traction and finding his way."

Hutchinson’s long-time goalie coach and mentor was at Monday night’s game and watched as he addressed news hounds on Tuesday.

“At the end of the day, even when he hasn’t played well and there has been talk about the team replacing him, this city wants Michael to be successful," said Jamie McGuire, who has also coached NHL goaltenders Brian Elliott and Scott Darling. “That has really helped to boost his confidence.” 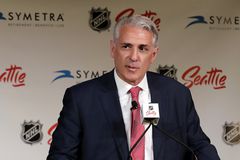 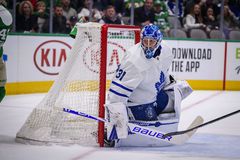 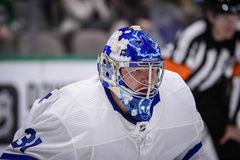