Just as the Toronto Maple Leafs began to gain steam, their failure to ice an adequate backup goaltender cost them again.

Shipped off to the American Hockey League only to be recalled this week, Michael Hutchinson was lit up on Friday in a 6-4 loss to the Buffalo Sabres at KeyBank Center.

Hutchinson allowed four goals in the second period after Toronto had built a 2-0 lead and conceded five in total on 35 shots. He is 0-5-1 on the season and has not won in the NHL in more than 11 months. The Maple Leafs are winless in the seven games that Frederik Andersen has sat out. In Hutchinson’s six starts, he has been scored on 28 times.

“For myself, it wasn’t the cleanest game," Hutchinson said. "I was just trying to battle through and get my body on as many pucks as I could. Unfortunately, we didn’t get the win.

“I could sit around being miserable or take it as a learning experience and watch video and see where I can improve. I am not going to dwell on it too much. It is still November, early in the season.”

The loss ended a three-game winning streak that began after Sheldon Keefe replaced Mike Babock as head coach on Nov. 20. Keefe, who was promoted after achieving great success with the AHL Marlies, will coach his first home game Saturday night when the teams meet in a rematch at Scotiabank Arena.

Buffalo, which had lost 10 of 12 games in November, improved to 12-10-4 overall and moved into third place in the NHL’s Atlantic Division. Toronto is 12-11-4, trails the Sabres in the standings and is now one spot removed from a playoff position.

“I think we built some really good things over the last three games,” John Tavares, who scored twice in the defeat, said. "We got the lead [today], but we were a little sloppy at times and just weren’t very hard on pucks.

“[Then] they started making some plays and started feeling good about themselves. We continued to give ourselves a chance but we kept shooting ourselves in the foot.”

Tavares scored late in the first and early in the second to stake the Maple Leafs to a 2-0 lead. Early on, it seemed that the Sabres were just the tonic that the struggling Hutchinson needed. He stopped all 13 shots against him in the first period, with some tough saves among them, but then the wheels suddenly came off after the first intermission.

At one stretch, Buffalo scored three times on seven shots. Jeff Skinner started the spree with a wrist shot. Jack Eichel scored next, fresh out of the penalty box, and then Casey Mittelstadt netted a deflection at 12:08 to put the Sabres ahead for good at 3-2. Victor Olofsson finished the flurry with 1:06 remaining in the period.

Sabres goalie Linus Ullmark was just shaky enough to keep the game interesting. At points, Buffalo led 4-3 and 5-4 before an empty-netter by Eichel closed things out. Dmytro Timashov and Kasperi Kapanen also scored for Toronto.

Tavares, in one of his best performances of the season, also went 15-7 on faceoffs. It was all for naught.

The Maple Leafs players, who asked Keefe to give Hutchinson another crack as the backup, bent over backwards to keep from assigning him any blame.

“He deserves better,” Morgan Rielly, the Toronto defenceman, said. “His teammates have to show up and play better in front of him."

Playing the role of diplomat, Keefe sidestepped questions about the team’s failure to win with anyone but Andersen in net.

“I think there will be a lot of focus on Hutchinson, but there’s a lot more going on in the game than just that,” he said. "I thought Hutch played an excellent first period, allowed us to get out of there with the 1-0 lead and build on it.

It was an entertaining game with 10 goals and 64 shots and it brought out the best in the crowd. The hometown fans did their best to drown out the raucous Maple Leafs followers who drove 90 minutes to attend the game, only to be sent back across the border with a disappointing loss.

Toronto went 0-for-4 on its power play and couldn’t stop the Sabres when it had to.

The Leafs have another chance on Saturday and Andersen is back in the net. That is a good thing. When he hasn’t played, Toronto has earned only one out of a possible 14 points. That isn’t sustainable over the course of a season.

The Maple Leafs did their best to avoid talking about it – “There were some encouraging signs,” Keefe said – but it’s a dilemma that needs to be solved. 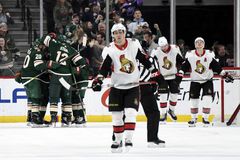 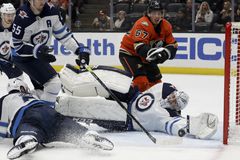