Of course, it was going to be like this. So close, again.

In the previous four games in their playoff series, neither the Maple Leafs nor the Blue Jackets had been able to win two in a row. They each shut one another out and staged remarkable comebacks from three goals behind. At one point, Toronto scored six straight goals, at another, Columbus scored seven.

They split six games this year, including two during the regular season, and finished tied in the Eastern Conference standings with 81 points each. It’s no surprise they dragged this out.

After Toronto won in overtime on Friday, they traded victories again, and now the Maple Leafs season is over.

Columbus played a mostly careful game, but won the final engagement in their best-of-five series 3-0 with goals from Zach Werenski, Liam Foudy and Nick Foligno. It also got great goal tending from Joonas Korpisalo, who recorded 33 saves.

The end is more disappointing than the previous three years, even though Toronto had been eliminated from the Stanley Cup playoffs in the first round in cruel fashion in each one of them. The Maple Leafs had a 2-1 series lead against the Washington Capitals in 2017. They had the lead entering the third period of Game 7 in 2018 in Boston. And they had a 3-2 series lead on the Bruins last year.

This time it’s even more frustrating. After vowing they would do better, that they were primed to make a deep run, they failed to reach the full field of 16 in the Stanley Cup tournament. One wonders if this is a big enough upset to cause a shake up at Maple Leaf Sports and Entertainment.

Columbus earned the right to play Tampa Bay in the first round. A year ago, the Blue Jackets swept the Lightning, which had been the NHL’s best team in the regular season, in four straight games.

Toronto has not won a playoff series since 2004, when it beat the Ottawa Senators in the first round.

“It’s hard to put it all into words,” Morgan Rielly, the Maple Leafs defenceman, said afterward about the disappointment. “It’s a bad feeling, and right now it is hard to live with. I don’t have the vocabulary to describe it.”

It’s not that the Maple Leafs didn’t give an honest effort. They were on the verge of being knocked out of the on Friday when William Nylander, Auston Matthews and Zach Hyman each scored in the last 3 minutes and 57 seconds to force it to extra time. Then Matthews won it fewer than seven minutes into the extra period.

In the quiet of a mostly empty Scotiabank Arena, you could hear the elated Maple Leafs players’ screams. They had escaped. They couldn’t do it twice.

In a surprise move, Toronto activated Andreas Johnsson from the injured reserve list shortly before the puck drop. The left wing suffered a knee injury after colliding with teammate Kasperi Kapanen and underwent surgery in the third week of February. He was moved into the lineup in place of 18-year-old rookie Nick Robertson.

Columbus coach John Tortorella turned to Korpisalo in the decisive game. Korpisalo started the first three of the series, but was replaced midway through the second period of game three after allowing three goals on 15 shots. Columbus rallied to win that one in overtime.

Toronto got the first good chance when Matthews, who recorded points on three of the Maple Leafs four goals on Friday, including scoring the overtime winner, was stopped by Korpisalo on a backhand on a rush to the net with 13:48 left in the first period.

Only 17 seconds later, Werenski knuckled a wrist shot past Andersen from 66 feet away, putting Columbus up 1-0. The Blue Jackets’ defenceman missed the last 10 minutes of Friday’s game because of injury.

Toronto had several more good opportunities. A deflection by Ilya Mikheyev grazed the crossbar, then John Tavares hit a post with a wide-open net. Columbus had the advantage in shots at the first intermission at 7-6.

Tyson Barrie went to the dressing room with 7:31 left in the second after a hard hit along the boards. He did not return, meaning the Maple Leafs were without him and Jake Muzzin, two of their best three defenceman.

Travis Dermott was called for tripping 29 seconds before the second intermission, giving the Blue Jackets man advantage headed into the third.

They failed to do anything with it; neither team was much good on the power play in the series.

Tortorella had no concern that his team would be affected by the tough loss in Game 4.

“We’re fine,” he said earlier Sunday. “We are good and ready to play. We’re not changing anything.”

Columbus went up 2-0 when Foudy scored with 8:20 left in the third. Foligno added an empty netter with 22 seconds left.

It won’t be much consolation, but the Maple Leafs join the other seven teams that lost in the qualifying round with a chance to get the No. 1 pick in the NHL draft. The lottery will be held Monday.

Earlier Sunday, Foligno said he had no doubt the Blue Jackets would bounce back.

Sheldon Keefe, who replaced Mike Babcock as head coach after Toronto got off to a poor start, was dejected.

“I’ll be thinking about this for a while,” Keefe said. 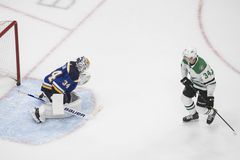