Several hours before the opening faceoff on Thursday night, Auston Matthews said he and his Toronto Maple Leafs teammates were excited about the prospect of finally seeing William Nylander back in action.

“He’s kind of given everybody a lift,” Matthews said. “I think everybody’s excited to put the whole thing in the past and move on.”

Well, anyone who wandered into the Leafs’ arena during the first two periods and saw their listless play against the Detroit Red Wings would have sworn they were all moping about the $45-million Nylander scooped up when his contract impasse finally ended last week. But the Leafs let their excitement show in the third period when they scored three goals in eight minutes, 58 seconds to tie the score, only to lose 5-4 in overtime when Dylan Larkin scored on a breakaway.

By then, Nylander had been benched for the last 11 minutes and 37 seconds of the third period plus overtime as head coach Mike Babcock cut back to three lines to wake up his teams. The Leafs also had to survive a shot from the point that hit both posts behind goaltender Garret Sparks and bounced out with nine seconds left in the third period to get to overtime.

According to Babcock, Nylander “was fine.” Babcock said the benching was just part of his efforts in the third period to find combinations for a comeback.

John Tavares, Zach Hyman and Andreas Johnsson scored the three quick goals in the third period for the Leafs. Kasperi Kapanen had the other one. Luke Glendening, Gustav Nyqvist and Mike Green also scored for Detroit.

There was a scare in the second period when Red Wings defenceman Niklas Kronwall hit Matthews and sent him headlong into the end boards. Matthews, who is just back in the lineup after missing 14 games with a shoulder injury, was slow to get up. But he made it back on the ice for the ensuing power play when Kronvall was penalized for boarding. Matthews played the rest of the game and showed no ill effects.

“When I saw the replay I saw his back hit and I thought it might be a little sore [Friday],” Babcock said. “At least it wasn’t his shoulder.”

But not even that hit stirred up the Leafs. Until the third period, there was little sign of enthusiasm, save from Nylander’s close friend Kasperi Kapanen.

And Kapanen had to concede his spot as Matthews’ right wing when Nylander returned to take up his usual position. But Kapanen was one of the few Leafs who was skating, as he performed well with centre Nazem Kadri and Johnsson on the third line.

The rest of the Leafs? Not so much, although they came to life in time to force overtime before seeing their NHL winning streak end at five games.

“[The Red Wings] played harder, they were better and I thought we did a real good job to get ourselves a point, but they were the team that deserved the two,” Babcock said. “It was great that we got one. We didn't have enough hands on deck.”

Another problem was the absence of No. 1 goaltender Frederik Andersen. He was given the night off to prepare for Saturday’s big game in Boston. But Sparks was so-so at best until overtime. He let in at least two goals that should have been stopped and never came close to keeping the Leafs in the game until they found their legs.

“It’s the National Hockey League,” Babcock said about Sparks. “We expect everyone to be good every night. That’s just the way we are.

“As a coach you look at yourself after a game like that and we weren’t ready to go. That’s on me. His game is on him. We’re all responsible.”

There was a sign the hockey gods may have thought things were going a little too well for the Leafs. On the way home after Tuesday’s big comeback overtime win over the Buffalo Sabres, the team bus broke down. This cost a couple of hours in travel time and forced Babcock to cancel Wednesday’s practice.

The only player who skated was Nylander, who was worked hard by assistant coach D.J. Smith. But it also meant Nylander had to return to action without a full practice with his teammates. He said it did not bother him unduly.

“I’ve skated two days in a row now with D.J. and got bagged so it was pretty good,” Nylander said. “I’m really excited to get started on home ice and get the season going.

“I’ve been skating by myself so I was waiting to practice with the guys. Then the bus broke down so I was oh, okay, one more day by myself.”

Babcock, though, saw the missed practice as another reason to limit Nylander’s ice-time against the Red Wings. He said with Nylander and Matthews missing a combined total of 42 games and playing on the same line he had to cut Nylander back.

The excitement took a while to build after a couple of decent shifts for Nylander, Matthews and left winger Patrick Marleau. After that, it was a much slower pace through the first two periods until the Leafs turned it up in the third, probably after Babcock lit a fire under them in the second intermission.

When he took his first shift at 1:05 of the first period, there were cheers from the fans with a few faint boos in the mix. But when Nylander took the puck and circled the offensive zone with authority a few minutes later it was all cheers.

The cheers got louder when Kapanen and his new linemates combined for a textbook goal at 4:50. Johnsson fired the puck across the slot to Jake Gardiner at the point and he relayed it to the front of the net when Kapanen deftly flipped it into the open side of the net.

But the 1-0 lead didn’t even last until the end of the Kadri line’s shift. Thirty-three seconds later, Kadri and company could not clear the puck out of the Leafs’ zone and Ericsson scored on a shot from the point. Sparks was screened on the play, although the shot was not exactly a rocket.

For the next 35 minutes Red Wings took advantage of the Leafs’ tendency to slumber in their own end and Sparks’ inability to bail them out. 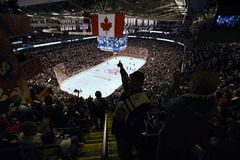