The Toronto Maple Leafs will be out to end a season-worst three-game losing streak Thursday night when they play the visiting Winnipeg Jets.

The Jets defeated the Maple Leafs 4-3 Tuesday night in the opener of the three-game series in Toronto behind the goaltending of Connor Hellebuyck, who made 36 saves. Toronto goaltender Frederik Andersen made 19 saves in defeat.

Auston Matthews scored his second goal of the game at 18:06 of the third period, but Toronto could not get the equalizer.

“Pretty crazy,” Hellebuyck said. “It was good to get in a rhythm, but the guys blocked a lot of key shots. That’s what it takes to win. A lot of character in that room.”

It was a good comeback for the Jets after losing 7-1 at the Montreal Canadiens on Saturday.

“Nobody panicked,” said Jets defenceman Josh Morrissey, who scored his first goal of the season and played 29 minutes on Tuesday. “Right after the game Paul [coach Maurice] comes in and tells us to park it. ... it’s not like the next day we were singling guys out in video and going through all seven goals in slow motion, where it feels like the world is ending. You’ve got to let it go. I bet you no one was even thinking about that coming into the game.”

The Jets have won seven of their past nine games.

The Maple Leafs remain in first place in the North Division despite their losing streak.

“I think every team goes through little stretches like this, but I think there’s lots for us to take away from it,” Maple Leafs coach Sheldon Keefe said. “I think it’s obviously a good thing for us that in all three games we’re right there, we’re in every game and we could have very easily gotten points out of each. That’s a good sign that we’re still right there.”

“We just haven’t been as crisp as we like to be for 60 minutes,” said Maple Leafs captain John Tavares, who had an assist on Tuesday. “We just don’t seem to be ending up on the right side of it. We’ve been in all these games, really tight. We’ve had chances to win them all. We’ve just got to make some key plays and obviously do a little better of a job defending against our opponent. We generated enough chances tonight. We just gave them a little bit too much off the rush.”

The goals by Matthews were a positive development. They were his first goals in six games. He has been playing with a wrist injury.

“Once you get out there [any discomfort] dwindles away,” Matthews said. “I felt fine [Tuesday] and my legs felt good.”

Matthews was given a maintenance day Wednesday and was not on the ice at practice.

The Jets were playing Tuesday with a depleted defence. Nathan Beaulieu left the game early in the second period and did not return after blocking a shot with his hand.

“You’re playing the No. 1 team in the league, so much firepower,” Maurice said. “All of [the defencemen] were really good. But boy, [Morrissey] was really good on his gap and then all the other things went with it. He made a bunch of smart plays with the puck, a bunch of real good defensive plays as well.” 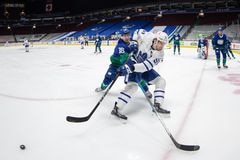 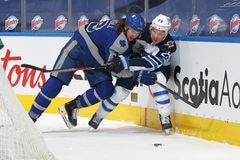 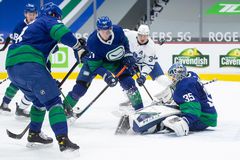