“You don’t realize until the taps are turned off how important they are,” he says.

As he grappled with the spread of the novel coronavirus, he turned to the unusual hobby he has elevated to art.

Four years ago, he enlisted his children to help build 100 scenes with Lego plastic bricks about the life of Harold Ballard, the irascible former owner of the Toronto Maple Leafs. Last week, he unveiled his latest project: the story, told entirely with Lego, of the infamous Peter Pocklington, the former Edmonton Oilers owner.

On March 16, Cadieux began to post a different scene on Twitter each day, and says he will do so for 100 days.

“It’s a good time to do this,” the lifelong Oilers fan says. “People need a diversion. As long as there are people out there that enjoy it, it makes my day.”

When his kids were younger, he spent countless hours fashioning items out of Lego with them. Now they are 11 through 17, and have mostly lost interest in the iconic toy.

“I play with them more now than they do,” Cadieux says. “I consider myself a creative guy. I am not good musically but when it comes to Legos, I can put everything down.”

Each scene fits on a 12-inch by 12-inch base and uses roughly 250 colourful interlocking pieces. He sketches it first, and then constructs it over an hour or two.

“I have more free time now than I have had in a long time,” Cadieux says. “Just because people are socially isolating, that doesn’t mean artists have to stop creating.”

A script accompanies each representation with material gleaned from The Puck Stops Here: The Amazing Life and Turbulent Times of Peter Pocklington, a 2009 book collaboration between the eccentric tycoon and authors Terry McConnell and J’lyn Nye.

“It is a crazy story to tell and fun to do in this manner,” Cadieux says. “He was bigger than life. You talk about people that grabbed the bull by the horns, he was one of them.”

As a kid growing up in London, Ont., Pocklington sold his Christmas presents to friends. At 15, he sold his father’s car while his dad was out of town. By 25, he was the youngest Ford dealer in Canada, and by 29, he owned the most successful dealership in the country.

It supplied Pocklington with the capital he needed in 1975 to purchase a half-interest in the Oilers, then a fledgling franchise in the World Hockey Association. It wasn’t long before Pocklington bought out co-owner Nelson Skalbania and acquired the rights to a teenaged Wayne Gretzky, whom he used as a bargaining chip to gain entry in the NHL.

The Oilers won four Stanley Cups in a span of five years – and then Pocklington shocked the sports world by trading Gretzky. Pocklington, who is 78 now and lives in California, has always been a wheeler and dealer and at times has run afoul of the law.

“A lot of people slag him, but nobody’s perfect,” Cadieux says. “He put Edmonton on the map.”

“I try to be creative and grab the context in one snapshot,” Cadieux says.

He launched his previous project on the acerbic Ballard in March, 2019, after working on it at his home in Red Deer for four years. He originally hoped it would turn into a Lego coffee-table book, but after publishers showed little interest, he began to post the scenes online.

“I thought it would get a ton of attention, but it drew a small niche crowd,” Cadieux says. “A few people got a kick out of it, but maybe for Maple Leafs fans it was just too painful.”

Cadieux didn’t decide to do another project until some followers on social media clamoured for a Season 2. Pocklington won a poll Cadieux posted on Twitter with Métis leader Louis Riel, Terry Fox and Gretzky as the other Lego candidates.

This week, the scenes he posted included the chance meeting at an Edmonton steak house where Pocklington took a 12-carat diamond off his wife’s finger and gave it to Skalbania as a down payment on the Oilers. The scenes can be found at @JoelCadieux on Twitter and #pocklingtonstories on Instagram.

Although he does not want to spoil the surprise, he says future dioramas will feature the Oilers winning their first Stanley Cup and the incident in which Pocklington was held hostage by a gunman at home in Edmonton. When the kidnapper was released from prison, Pocklington gave him money to start a new business.

“[His work is] wildly entertaining,” says Allan Mitchell, a TSN Radio host in Edmonton. “The creativity he shows with authentic looks is exceptional, and he gets his facts right and picks very good information.”

Pocklington learned about Cadieux’s unique artwork this week and called to thank him.

“I love it,” Pocklington said, voice booming from Palm Desert, Calif. “I am smiling.”

Cadieux did not plan to release his Pocklington stories until later in the year, but pushed up the publication date after the coronavirus left people isolated at home with no sports to watch.

“If I give people something to smile about at this difficult time, it is worth it,” he says.

Trade secrets: NHL players open up about the pain and upheaval of being moved to a new team
February 24, 2020 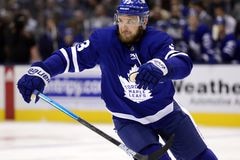 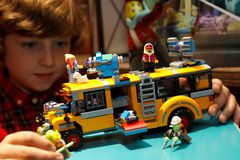 Professional Lego builder ‘hasn’t worn a tie for years’ after giving up IT job
January 23, 2020 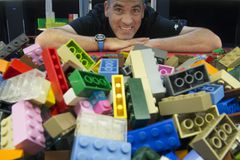