The hulking defenceman’s Tampa Bay Lightning had home-ice advantage in the 2015 Stanley Cup final against the Chicago Blackhawks heading into Game 5 with the series tied 2-2.

Simply holding serve at Amalie Arena that night and again in Game 7 would have earned the franchise its second title, and Hedman’s first. But a 2-1 setback followed by a crushing 2-0 defeat two days later at the United Center saw the Blackhawks claim their third Cup in six years, leaving Hedman with an empty feeling that still lingers.

“The loss to Chicago is not going to go away until I win,” Hedman said recently. “Coming up short, it’s not fun.”

Tampa Bay would go on to make the Eastern Conference final the following season and then again last spring, only to lose in seven games both times to the eventual champions – the Pittsburgh Penguins and Washington Capitals – despite holding 3-2 leads in each series with a chance to close things out in Florida.

Hedman’s Lightning have been the class of the NHL by a wide margin this season ever since taking over top spot in the overall standings for good back on Dec. 1. They clinched a playoff berth March 9 and, this past weekend, wrapped up the franchise’s first Presidents’ Trophy – which grants them home-ice advantage as long as they last in the postseason.

Tampa Bay has been so far out in front at times in 2018-19, the players could be forgiven for easing off the throttle. But that’s not the nature of this team, one with deep battle scars from playoff heartbreak.

“We’re a hungry group,” Hedman continued. “We don’t have any former Stanley Cup champions, so we don’t know what it feels like. I think everyone in here is very eager to find out.”

Coming off his first Norris Trophy as the NHL’s top defenceman last season, the 6-foot-6, 223-pound Swede is a leader on a roster that could make history over the final few weeks of the schedule.

Heading into Wednesday’s game in Washington, the Lightning were on pace to finish with 63 wins, although both records they could eclipse – points and victories – were set before games had 3-on-3 overtime and shootouts.

“We’re not allowing ourselves to slip,” Hedman said. “We can win 10 games in a row and we can have a bad period, and there’s some heated discussions in the locker room. We know where we are in the standings, but at the same time it’s April and forward that’s going to count for us.”

It doesn’t hurt that the Lightning have games against teams jockeying for position, either seeding or their playoff lives, remaining in front of them. After visiting the Capitals, Tampa’s opponents include Boston (twice), Toronto, Montreal, St. Louis, Washington (again) and Carolina.

“We’ve learned from past experience you want to be playing very well heading into the playoffs, it doesn’t matter where you are in the standings,” Lightning captain Steven Stamko said. “We play some really good teams down the stretch, and I think that’s going to be good for us to prepare for that mentality we have come April.”

Tampa has been led this season by Nikita Kucherov – who, like his team in the standings, is running away with the scoring race with 117 points – Brayden Point and Stamkos up front, and Hedman on defence.

Lightning netminder Andrei Vasilevskiy, meanwhile, has a .930 save percentage and a 2.26 goals-against average to backstop and team that doesn’t have many holes, including in its approach to the last few weeks of the regular season.

Washington’s 4-1 victory over New Jersey on Tuesday pushed the Capitals into first in the Metropolitan Division. Last season’s Cup champions are finding their stride at the right time with a 9-2-0 record over their past 11 games heading into Wednesday.

Connor McDavid, not surprisingly, topped a number of categories in the NHLPA’s yearly player poll. Edmonton’s captain was given the nod by his peers as the league’s best forward, most difficult player to face, and the one they’d choose to build a franchise around. Boston star/super-pest Brad Marchand was ranked as both the best and worst trash-talker, while Montreal winger Tomas Tatar – known as “Tuna” among teammates – was honoured for having the best nickname. 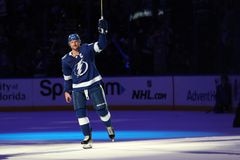 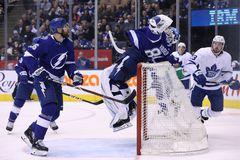