An aggressive style and timely goaltending paid off for the Calgary Flames on Thursday night. The effort also improved their chances of catching Montreal for the final playoff spot in the North Division.

Elias Lindholm scored twice and Dillon Dube added an insurance goal in the third period as the Flames beat the Edmonton Oilers 3-1 at Rogers Place.

The victory moved Calgary (22-24-3) four points behind the idle Canadiens, who have a game in hand.

“I guess all we can do is keep winning and hope that they lose some to make this very interesting here down the stretch,” said Flames forward Matthew Tkachuk, who had two assists.

James Neal had the lone goal for the Oilers (29-17-2), who were denied a third straight win.

Edmonton is in second place in the North, nine points behind Toronto. The Maple Leafs posted a 4-1 win over the Vancouver Canucks earlier in the evening.

The Flames, desperate for points as the season winds down, were physical from the start. Tkachuk set an early tone with a strong hit on Dmitry Kulikov behind the Edmonton net.

The Oilers struggled to clear the puck out of the zone ahead of Calgary’s opening goal. Tkachuk got possession and set up Lindholm for a one-timer that beat Mike Smith at 6:04.

Neal pulled Edmonton even with his first goal since March 10. He had space down low and snapped it under Jacob Markstrom’s right arm at 13:28.

Calgary regained the lead at 7:07 of the second period after Lindholm won a faceoff, moved toward the net and deflected Rasmus Andersson’s point shot.

“Obviously he’s a really good two-way centreman for us but it’s nice to see him get rewarded too,” said Flames coach Darryl Sutter.

On the next shift, Neal nearly pulled the Oilers even again. He broke in alone and tried to chip it past Markstrom but the netminder made a nice glove save.

Smith outdid him at the other end in the dying seconds of the period with an all-world stop.

Mikael Backlund flipped a saucer pass to Lindholm on a 2-on-1 short-handed break but a sprawled, outstretched Smith managed to get his glove on the shot to deny the Calgary centre the hat trick.

“It’s funny how it works,” Lindholm said. “Two greasy ones in the beginning and then you get a really good chance and it doesn’t go in.”

Connor McDavid and Draisaitl, one-two in the NHL scoring race, started to buzz more often in the third period but Markstrom was up to the task.

Calgary made it a two-goal advantage at 12:08. Milan Lucic fired a shot that rolled between Smith’s legs and Dube tucked in the loose puck from a tight angle.

The Oilers pulled Smith with two minutes left in regulation but had difficulty providing sustained pressure.

It was Edmonton’s third game in four nights and fatigue looked to be a factor at times.

“We were sloppy,” said Edmonton coach Dave Tippett. “Sloppy with the puck and turned a lot of pucks over. Smith was really good in goal and gave us a chance. We had some chances and didn’t bury anything.”

The Oilers and Flames will face off again Saturday in Edmonton. Calgary can even the 10-game season series with a victory. 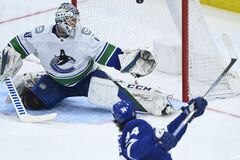 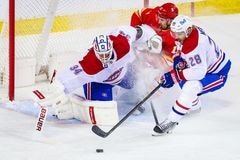 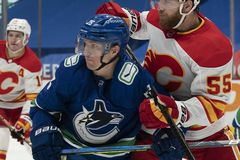