The biggest boost for the Colorado Avalanche in must-win game after must-win game comes from an unlikely source – their third-string goaltender.

Michael Hutchinson stopped 27 shots and the Avalanche beat the Dallas Stars 4-1 on Wednesday night to force a decisive Game 7 in their second-round playoff series.

The 30-year-old Hutchinson was back in net with starter Philipp Grubauer and backup Pavel Francouz both sidelined. It was just Hutchinson’s second career NHL playoff start – and second win. He stymied the Stars all night after allowing an early goal.

“He’s an easy guy to cheer for,” Avalanche coach Jared Bednar. “For him to to be able to step in and do what he’s done for us the last couple games is nothing short of amazing. He deserves all the credit.”

Rookie defenceman Cale Makar scored the go-ahead goal in the second period, while Nikita Zadorov and Mikko Rantanen also added goals. Nathan MacKinnon scored an empty-netter for the Avalanche, who staved off elimination for a second straight game to tie the series at three wins apiece. Colorado has never won a post-season series when trailing 3-1.

“Our mindset’s changed,” Makar said. “Obviously, we’re on the ropes and we have a team that’s going to fight to the end here. The next one is a big one for us. It’s going to be a fun one.”

Miro Heiskanen scored for the Stars, while Anton Khudobin made 20 saves.

Both teams lost in Game 7 last season in the second round. Colorado is attempting to advance to the Western Conference finals for the first time since 2002. The Stars last went in 2008.

“We never thought it was going to be a sweep or an easy series,” Stars forward Tyler Seguin said. “We always said it can go Game 6 or 7, and it’s 7, so here we are.”

This marked the first time in the high-scoring series the winning team didn’t net at least five goals.

Colorado increased its lead to 3-1 on a goal by Rantanen that was set up on a flip pass from MacKinnon with 16:39 remaining.

It was well protected by Hutchinson, who was acquired in a February trade with Toronto and locked things down.

“He calms things down for us,” MacKinnon said. “Galvanizes the team, for sure. We feel very confident when our goalie is playing like that.”

The Stars are looking for ways to disrupt Hutchinson’s rhythm.

MacKinnon’s goal and assist give him at least a point in all 14 games this post-season. He’s the first player to notch 25 post-season points (nine goals, 16 assists) in 14 or less games since Wayne Gretzky with Los Angeles in 1993 (eight goals, 17 assists in 14 games).

What stood out to MacKinnon, though, was the defensive effort. The Avalanche only took one penalty.

“We were one of the best defensive teams in the regular season. People don’t really realize that,” MacKinnon said. “We really take pride in that.”

Makar put Colorado up 2-1 midway through the second period by dropping down from the blue line, taking a pass from Rantanen and sailing the puck past Khudobin. Makar’s 15 points this post-season are the most by a rookie defenceman in Stanley Cup playoffs history. Right on his heels, though, is Quinn Hughes, who has 14 points for Vancouver.

A banged-up Colorado squad saw captain Gabriel Landeskog limp off the ice after taking a skate to his right leg late in the second period. He briefly returned in the third, but his status for Game 7 is uncertain.

The Avalanche also had Conor Timmins leave the game.

Heiskanen scored the game’s first goal late in the opening period when his shot glanced off the glove of Hutchinson and into the net. The 21-year-old Heiskanen leads all defencemen with 19 points (five goals, 14 assists) during the post-season.

Dallas’ advantage lasted less than two minutes as Colorado tied it up on Zadorov’s goal. Just before the shot, Jamie Oleksiak pushed J.T. Compher into Khudobin, who never got a good look at the puck.

The Stars weathered what could’ve been disaster in spending six minutes inside the penalty box. Blake Comeau drew a four-minute, double-minor after catching Pierre-Edouard Bellemare in the head with a high stick. Oleksiak also drew a penalty for holding.

“We put ourselves in this position,” Bowness said. “Hey, we’re in Game 7. Deal with it. Just got to make it a harder night for that whole team over there.” 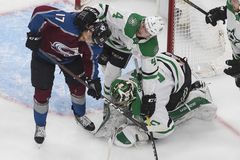