Morgan Rielly knew something was wrong the instant Florida’s Aleksander Barkov ricocheted a shot off his left foot on Sunday.

“It definitely didn’t feel good, but you don’t know until you take your skate off,” the Toronto Maple Leafs defenceman said a day after learning he had a fracture. “You play through it and deal with the consequences afterwards. Unfortunately, it’s a little more severe than I thought.”

The Leafs, who are already without Jake Muzzin on defence, placed Rielly on injured reserve on Monday. He is expected to miss a minimum of eight weeks during the team’s drive toward the postseason.

“I’m not going to be overly dramatic about it,” Rielly said. “It happens to everyone. It is all part of the journey. I am just going to work hard and try to get back. I want to be healthy and help the team.”

Toronto played its first game without him on Tuesday, and fared just fine. Rasmus Sandin, the prized defensive prospect recalled from the American Hockey League to fill in for Rielly, had two assists as the Maple Leafs took a 3-0 lead in the first period en route to a 7-4 victory.

Auston Matthews scored three more and now has more goals at Scotiabank Arena (27) than the Maple Leafs have played home games (23). He has 34 on the season and trails David Pastrnak of Boston by two for the NHL lead.

The triumph ended a three-game losing streak in which Toronto lost by a combined 18-11 scoreline. It is 25-16-6 as it heads into a tough home game on Thursday against the Calgary Flames.

“It is a good opportunity for us as a group here,” head coach Sheldon Keefe said following Monday’s morning skate. “When Muzzin initially went out we played some good hockey and found ways to win games. That has gotten away from us [lately] so it is time to reflect on where need to get better and make up for these types of losses.

“Elite teams don’t get fazed by these situations. We believe we are an elite team and have the ability to take big steps as a group.”

The Maple Leafs currently hold down the third playoff position among teams in the NHL’s Atlantic Division. New Jersey dropped to 17-22-7 after back-to-back victories on the weekend over the Washington Capitals and Tampa Bay Lightning. The Devils came in at 8-4-2 over their last 14 games but largely looked like a team that has already traded its best player (Taylor Hall), fired its head coach (John Hynes) and dismissed its general manager (Ray Shero).

Toronto fielded a makeshift defence with Travis Dermott and Justin Holl in the first pairing and Tyson Barrie with Martin Marincin in its second. Cody Ceci and Sandin, who was recently named the top defenceman at the 2020 world juniors tournament, manned the third.

The 19-year-old played in six games for Toronto at the start of the season before he was farmed out to the AHL’s Marlies.

He got his first assist of the night less than six minutes into the game when John Tavares tipped in his wrist shot to give the Maple Leafs a 1-0 lead. Centre Frédérik Gauthier whipped a shot by New Jersey goalie Louis Domingue from in front of the net to make it 2-0 with 8:10 remaining in the first, and then Zach Hyman deflected in a knuckler by Sandin on a power play only three seconds before the first intermission.

The goals were the 18th for Tavares, the sixth for Gauthier and the 12th for Hyman. The left winger began the season on injured reserve after undergoing an operation to fix a knee injury that occurred against Boston during the 2019 playoffs.

Toronto entered the night 12-2-1 when leading after the first 20 minutes and quickly expanded the margin. William Nylander netted his 20th goal with 17:48 remaining in the second period and the rout was on. Nylander, who had seven goals in 54 games after holding out at the start of last season, directed a shot from Pierre Engvall past Domingue to increase the lead to 4-0.

After Coleman tucked a shot around Frederik Andersen to trim the advantage to 4-1, Mitch Marner found Matthews with a soft pass to the right of the net and the all-star centre easily beat Domingue to make it 5-1 with 8:29 left in the second.

That led to Domingue’s exit after being scored upon five times on 19 shots.

The hat trick was Matthews’s first since the first game of his NHL career on Oct. 12, 2016, at Ottawa. That night he scored four times.

“I figured I’d get another one [sometime]," Matthews deadpanned.

It was his 19th multi-goal game of the season, which leads the league, and he now has 39 points on home ice.

“We have talked about it a couple of times,” Marner said. “I’m sure it is a big one to get off his shoulders.”

The Maple Leafs were coming off an 8-4 defeat by the Florida Panthers on Sunday. The bigger loss may have been losing Rielly. He was the team’s top-scoring defenceman with 27 points in 46 games and leads all Toronto players in ice time.

Sandin filled in admirably in his absence, though, and the Maple Leafs buried the Devils with a cascade of goals.

“His game matches ours very well,” Marner said of Sandin. "He was top-notch. He made something happen all over the ice.”

Morgan Rielly out for eight weeks with injury, the latest key Leafs player to be sidelined
January 13, 2020 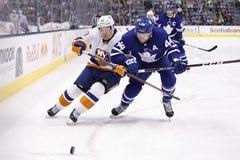 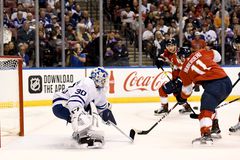 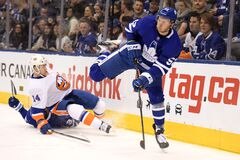