The Toronto Maple Leafs were fifth in the Atlantic Division and 10th in the Eastern Conference on Nov. 20 when Mike Babcock was fired as head coach. Two months later, despite a 15-4-1 stretch under Sheldon Keefe, they are fourth in the division and 10th in the conference. That says something about how poorly Toronto played early on, and how difficult it is for a team to overcome a slow start.

It is not a season-ender, but it steepens the climb to the playoffs. The Maple Leafs have 33 games left in the regular season and little room for disastrous performances like the one last Saturday when they were laid bare by the Chicago Blackhawks.

It was so bad that Kyle Dubas, the team’s general manager, jumped out of his chair in exasperation when Chicago’s bright rookie, Dominik Kubalik, raced up the ice and batted a puck past Frederik Andersen to give the visitors a 6-2 second-period lead.

The outcome was long decided before that goal, Kubalik’s second goal of the evening, but it was another piece of evidence that pointed to how badly Toronto was outplayed. On the verge of their bye week, Maple Leafs players showed no discernible pulse. It took only 21 seconds for them to fall behind and they trailed 3-0 after the first period.

No doubt players have gotten some much-needed rest and have had time to heal during the all-star break. For one, Jake Muzzin has been farmed out to the American Hockey League’s Toronto Marlies for a conditioning stint after missing 10 games with a broken foot.

The defenceman will likely return to the lineup on Monday when Toronto plays the first of two road games against Nashville and then Dallas. Neither is an easy draw, especially on their home ice. A victory over either would help the Leafs to regain the momentum they fumbled away by winning only one of their past six outings.

With a couple of exceptions, other Canadian NHL teams are doing well. Vancouver, Edmonton and Calgary hold down the top three positions in the Pacific Division. Elias Pettersson has 51 points in 49 games to lead the Canucks. Connor McDavid and Leon Draisaitl have 54 goals and 151 points combined for the Oilers. David Rittich has been solid in the net for the Flames.

Of the remaining three, only Winnipeg remains within striking distance of the playoffs. The Jets are fading, however, having lost four straight going into the break. Montreal is 12th among 16 teams in the Eastern Conference, while Ottawa is 14th.

The Maple Leafs, meanwhile, have lost ground while idle. Some of the teams bunched around them were still playing games and have pulled ahead. There is little doubt that a club with such high expectations never expected to begin the second half trailing the likes of Columbus, Florida and Philadelphia.

It was announced this week that Auston Matthews, their high-scoring centre, would sit out all on-ice events at the all-star game while he received treatment on an injured wrist. It would not appear to be anything serious; he and Alexander Ovechkin are tied for second in the NHL in goals, each with 34. David Pastrnak of Boston is first with 37.

There was no prior hint that Matthews was hurt, so having him skip the all-star festivities looks precautionary at best and suspicious at worst.

While most of their teammates have been enjoying themselves in sunnier and warmer climes, Matthews, Andersen and Mitch Marner are all in St. Louis. It is the fourth time in as many years that Matthews was chosen to play in the all-star game, but the first for the other two.

Andersen was easily the team’s most valuable player over the first two months, but has fallen into a slump. The Danish goalie has an .895 save percentage since December and has been especially ineffective over the past 10 games, in which he has stopped only 86.9 per cent of the shots directed at him.

By comparison, his little-used backup, Michael Hutchinson, has been slightly better: a .903 save percentage over the past seven weeks.

Together, they have allowed six or more goals in six of the past 12 games and four or more in eight of those games. That trend can only cause trouble unless the team’s high-powered offence finds another gear.

That could well happen, but it is asking a lot.

Matthews has 23 assists to go along with his 34 goals, and Marner has 47 points despite missing 11 games with an ankle injury.

One could argue that Toronto has done as well as could be expected when one considers the injuries that have piled up. Morgan Rielly sustained the most recent and serious one, a fractured foot that will keep him sidelined for at least six more weeks.

But having a lineup that is injury-riddled is not a viable excuse for a team underperforming in the NHL.

Where that leaves the Maple Leafs is in a more challenging position than anyone expected this year. The fact they are 16-7-3 since Keefe took over behind the bench is reason for optimism. A top-heavy schedule leaves them with only four games left to play back to back. That should help, too.

The season hangs in the balance. Their followers’ hopes live and die with what happens next. Will there be better goaltending? More consistent defensive play? Or will this become a year to forget? 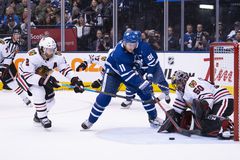 Auston Matthews is putting together one of the greatest seasons in Maple Leafs’ history
January 20, 2020 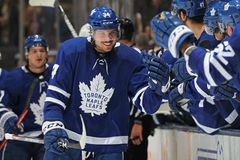 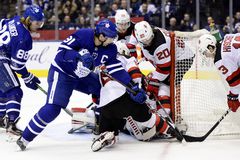