The Maple Leafs played their best game of the young season on Monday night and were rewarded with a 3-1 victory over the Winnipeg Jets at Scotiabank Arena.

Mitch Marner scored twice and John Tavares also had a goal for Toronto while Frederick Andersen made 27 saves. It was the first of 10 games between the teams in the all-Canadian North Division and included a few heated moments.

The Maple Leafs improved to 3-1 and have now had a goal on a power play in each game. Andersen, who allowed nine goals on 56 shots in his first two starts, improved to 10-0-2 in his career against Winnipeg.

A tribute to the late Martin Luther King Jr. was held before the puck dropped -- it was Martin Luther King Day in the United States -- and players wore decals to honour Willie O’Ree, the New Brunswicker who became the NHL’s first Black player 63 years earlier while with the Boston Bruins.

The Jets had won their opening game at the Bell MTS Centre on Thursday in overtime over the Calgary Flames and had earned at least one point in seven of their last eight visits to Toronto.

With a veteran team and a handful of stars, they are expected to be in the hunt for one of the division’s four playoff berths and likely offered the biggest challenge thus far that Toronto has faced. A year ago, the Jets had five 20-goal scorers, which was tied with the Florida Panthers for most in the league.

They were largely shut down in this meeting, however, and Winnipeg’s frustration grew as the game wore on.

At one point, Jets winger Kyle Connor barrelled into Andersen on a charge to the net. The strapping goalie threw one punch at him as they laid on the ice, and then teammate Justin Holl came to his defence and was charged for roughing, negating what would have been a man advantage due to an interference penalty.

“I think that was great,” Andersen said. “You have to protect your teammates. They have to know they are going to pay for it.”

Marner was unmoved that Scheifeile was angry.

“Who cares?” he said. “We won the game. That’s all that matters. That’s all I care about.”

The Jets played without sharp-shooting right wing Patrik Laine, who was unavailable due to an upper body injury. They were also missing defencemen Tucker Poolman and Dylan Demelo. Poolman is on the league’s COVID-19 protocol list and Demelo’s wife just gave birth.

Mikko Lehtonen saw 6 minutes 41 seconds of ice time for the Maple Leafs in his first NHL game after leading the KHL’s defencemen in scoring last season with 49 points in 60 games. Toronto coach Sheldon Keefe had chosen to sit the 27-year-old from Finland for the first three games to allow him time to get used to the smaller rinks and style of play in North America. Besides playing in the KHL, he also has played at the elite level in the Finnish and Swedish leagues.

“I felt confident and it felt good to get the first one done,” Lehtonen said. “Everybody wants to play every night, [but] I worked hard and stayed positive and focused on getting better each day.”

The teams traded chances in the first period but both goalies were sharp. Andersen stopped a point-blank shot snapped by Scheifele from 23 feet out. Connor Hellebuyck, who won the Vezina Trophy as the league’s top backstop last season, stopped a backhand off a rush by Tavares. Then he robbed Auston Matthews of a goal on a wrist shot set up by a pass from Joe Thornton.

When the teams went to the first intermission they had 10 shots apiece.

The Maple Leafs turned the heat up at the start of the second. They blitzed Hellebuyck with shots, at one point having a 19-1 advantage. They strung together nine on a power play before Tavares beat him with 14:32 remaining. It was Toronto’s 12th goal of the season and sixth on the power play.

Marner added to the lead by tapping in a rebound off a shot by Justin Holl 1 minute 21 seconds before the second intermission. But Connor responded 34 seconds later and the teams headed to their dressing rooms with Toronto clinging to a 2-1 lead despite dominating play. They outshot the Jets 22-6 in the period.

Jason Spezza, waived on Sunday, was back on the fourth line when he cleared waivers during the day. The 37-year-old was added back to the roster due to a knee injury that was suffered by rookie Nick Robertson in a victory over Ottawa Saturday night. The rookie is expected to miss four weeks.

Spezza won his first six faceoffs, extending a streak to 16 wins in a row in the last two games. He ended up seven for 11 overall.

The Jets went 24-1 when leading last year after the second period, but were in arrears at that point on Monday. Hellebuyck, who recorded 31 of Winnipeg’s 37 wins last season, had 35 saves.

Tavares, the Toronto captain, has already scored four times overall. He also went 10-3 on faceoffs against the Jets.

“He looks confident to me, and he looks quicker than he did at any time last season,” Keefe said. “He looks like he has an extra step, and it is serving us well.”

The Maple Leafs play at home on Wednesday and Friday against Connor McDavid and the Edmonton Oilers, who were attempting to avoid a 1-3 start if they lost to Montreal on Monday night.

Keefe was satisfied with the comprehensive victory, but only to a point.

“I’d attribute our better play to having had more time together, more games, and more discussions,” he said. “I’m sure there are a number of places where we need to improve.” 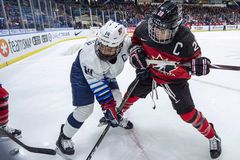 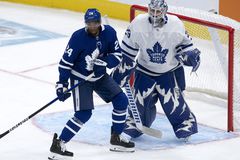