Mark Giordano’s “unbelievable” three-point performance on Saturday proves why he’s the captain of the Calgary Flames, says the team’s goalie.

Giordano tallied a goal and two assists in the Flames’ decisive 3-1 win over the Vancouver Canucks.

“He puts it all out there ever time he’s on the ice and he’s getting rewarded for all the hard work he puts in with points this year,” Mike Smith said.

“He deserves every accolade he’s getting, he’s one of the biggest warriors I have ever played with,” said Smith, who turned away 27-of-28 shots in the win.

Giordano opened the scoring 9:44 into the first period on Saturday after Derek Ryan sliced him a pass from down low. The veteran blue liner collected the puck on his tape and fired a snap shot into the top left corner of the net over a diving Jacob Markstrom.

Being in on every big play is nothing new for Giordano, said Flames coach Bill Peters.

Fourth-liners Garnet Hathaway and Andrew Mangiapane also scored for the Flames (47-21-7) and Giordano was quick to give them credit.

“They’ve been really good for a long time now and it’s really nice to see them get rewarded,” he said. “They are putting pucks in the net it seems like every game for us and I think their skill is underrated. They can shoot the puck, move the puck to each other and they have great chemistry right now. It’s fun to play with them.”

Brock Boeser scored a power-play goal for the Canucks (32-33-10), extending his point streak to nine games.

“I feel confident out there. I’m moving a lot better and getting to pucks and causing turnovers,” the right-winger said.

Markstrom had 28 saves for Vancouver.

The loss snapped a three-game win streak for Vancouver. The squad sits six points back of the Colorado Avalanche, who hold the final wild-card spot in the Western Conference.

The defeat was deflating but there were still bright spots, said Canucks coach Travis Green.

“It was a good hockey game. A lot of intensity in the game. You could feel it,” he said. “It’s a good game to learn from. A couple young guys made a couple mistakes. And you learn from those mistakes and you move on.”

The Flames were the first team in the West to clinch a playoff spot and remain at the top of the conference standings after passing the 100-point mark on Saturday night.

“It’s an unbelievable accomplishment for our team and the organization,” Smith said. “This team has come a long way from the start of the season, and the 100-point mark means you are doing a lot of good things.”

But there’s still work to be done before the regular season ends, Giordano said.

“We’re proud but we want to keep going, keep playing well going into playoffs, try to solidify the division and go from there,” he said.

The Canucks will be back in action on Sunday, hosting the Columbus Blue Jackets.

The Flames will battle the L.A. Kings in Calgary on Monday. 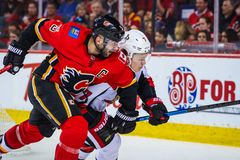 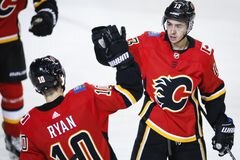 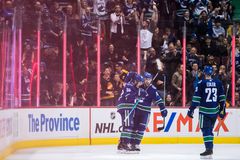