With the line of Auston Matthews between Mitch Marner and Zach Hyman combining for eight points in a 4-1 win over the Detroit Red Wings on Saturday night, Sheldon Keefe was only too happy to keep the trio together for Monday’s matinee against the Carolina Hurricanes.

But down 5-3 after 40 minutes, having conceded five successive goals, the Toronto Maple Leafs head coach was having second thoughts, and briefly considered shuffling his deck.

Keefe will go into the Christmas break thankful he stayed the course, though, after seeing his team score five times in the third period on its way to an 8-6 victory for a fifth consecutive win. The rookie head coach improved to 11-4 since replacing Mike Babcock last month.

“We just felt there’s potential there and something could spark itself and get going,” he said after watching his de facto top line explode for 10 points, nine of which came in the third period. With the win, Toronto ensures it will remain second in the Atlantic Division when it returns from the leaguewide Christmas shutdown with a trip to New Jersey to play the Devils on Friday.

Frederik Andersen said he knew what Monday’s game reminded him of, with the Leafs netminder making 34 saves to earn his 19th win of the season.

The chief pyrotechnician on the Leafs roster was Marner, whose five points on two goals and three assists tied his career high set on Feb. 10, 2018, a 6-3 win over the Ottawa Senators.

Not including the empty-netter from Pierre Engvall to ice the victory, Marner factored in four goals in the Leafs’ third-period comeback, running his point streak to eight games. He has 17 points over that stretch.

“Just a special player doing special things there,” Matthews said of his teammate’s play in the third period.

It’s not the first time Marner has shone in marquee games.

In last season’s Next Generation game, one of a series that focus on younger fans and their families, the winger scored the first two goals in an eventual 4-3 loss to the Minnesota Wild. That included tying the Leafs franchise record by scoring seven seconds into the start of the game, equalling a mark set by Charlie Conacher in 1932.

And the season prior, in the Next Century game to mark the 100th anniversary of the Toronto NHL franchise, Marner had four points in an 8-1 win over Carolina – which was also the most recent time the Leafs had scored eight goals in one game.

While Marner was happy to put on a show – one that memorably included converting Matthews’s spin-o-rama assist to close the disadvantage to 6-5 – he was more concerned about the two points.

“I'm sure [the fans] loved it today, a lot of goals scored so something that I think both teams want to fix,” he said. “I'm sure the crowd loved it, coaches probably didn't enjoy it as much … but it's a big win for us.”

Matthews – who had scored his 24th to go along with the assist – says the connection with Marner is one that has been developing over the last little while.

“We’ve had fun playing together in the past, whether it was for a couple of shifts or a period or one game, so we’ve not really had consistency playing together but he’s a really great player,” Matthews said. “He’s fun to play with and I think we just try to feed off each other like we did tonight.”

But a big boost for the Leafs proved to be a big letdown for a pair of Marner’s former teammates. Jake Gardiner made his first return to Toronto after dressing for 551 regular-season games in the Leafs’ blue-and-white. Though he received the ritual video tribute handed down to seemingly every player upon their return to the city, the game didn’t go the way he had hoped.

While Gardiner made no dent on the score sheet in 15:05 of ice time, the same couldn’t be said for one-time Leafs netminder James Reimer, making his fifth appearance against his old team. The Canes backup gave up three goals on seven shots as Toronto jumped out to a 3-0 lead, which led to Carolina head coach Rod Brind’Amour replacing him with Petr Mrazek just 5:10 into the game.

“We hung him out to dry right away and I think he knows that,” Gardiner said afterward.

However, having seen his team turn a three-goal disadvantage into a 5-3 lead by the end of the second period, Brind’Amour was more upset with how the Hurricanes let the Leafs off the hook.

“I would have rather lost 8-0 to be honest with you because we were so bad at the start and then you fight back, and then you’re basically just throwing that away,” he said. “Unless you finish it off there’s really no point in coming back.” 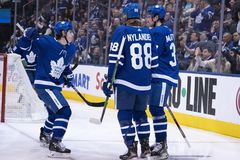 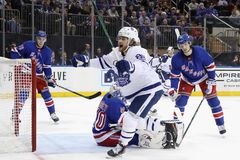 In a season full of surprises, defenceman Justin Holl has been one of the Maple Leafs’ most pleasant
December 20, 2019 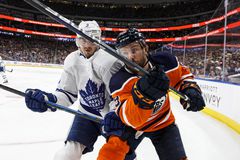