Barzal scored twice as the New York Islanders won their third straight game with a 3-1 victory over the Winnipeg Jets.

Nikolaj Ehlers had the lone goal for Winnipeg (4-5-0), which has lost three in a row.

“It’s not going for us right now,” Jets captain Blake Wheeler said. “Obviously scoring one goal, you’re not going to win many games that way.

“I thought we did enough offensively to win the game. I thought ninth game in 15 days, I still thought we carried most of the play and were the better team. It just wasn’t meant to be.”

Connor Hellebuyck made 23 saves for Winnipeg in the third of a five-game homestand at Bell MTS Place.

Semyon Varlamov stopped 32 shots for the Islanders (4-3-0), who had won their last two games in overtime and a shootout.

Josh Bailey scored into an empty net with 27 seconds left in the third period.

“We were obviously slow out of the gates and we really relied on him early to keep us in the game,” Bailey said of Varlamov.

“He made some tough saves, some timely saves and really just gave us a chance to get going and get back into the game and obviously shut them down when we needed it at the end.”

Barzal scored the go-ahead goal with 17 seconds remaining in the second period.

The Jets had outshot the visitors 16-5 in the first period, had a pair of power plays and led 1-0.

Ehlers scored with 16 seconds left in a tripping penalty to Islanders defenceman Adam Pelech, a high shot that went over Varlamov’s glove at 13:12.

The Jets have scored at least one power-play goal in four straight games.

“Listen, we’re not sitting back in these games,” Winnipeg coach Paul Maurice said. “We’re not defending a 1-0 lead from the second period on. It’s not a function of us not having a killer instinct.”

The Islanders didn’t get their sixth shot of the game until 7:41 of the second period and it was a power-play goal by Barzal to tie it 1-1 just 16 seconds after Dmitry Kulikov went to the penalty box for tripping.

Hellebuyck made four great stops in the middle period, but a Winnipeg turnover led to Barzal’s second goal on a two-on-one with Anders Lee at 19:43. Shots on goal were 24-17 for Winnipeg.

It was Barzal’s third goal of the season and moved his point streak to three games with a trio of goals and two assists in that span.

“He’s shooting the puck way better,” New York coach Barry Trotz said. “We talked about it last year, sort of being a dual-threat and not always a pass-first guy. He changed a lot of things this summer and that was one of them.”

The Jets pulled Hellebuyck for the extra attacker with about two minutes left in the third. Varlamov stopped a couple shots, including one by Patrik Laine through traffic.

Winnipeg hosts the Edmonton Oilers Sunday. The Islanders travel to Ohio for a Saturday game against the Columbus Blue Jackets.

This report by The Canadian Press was first published Oct. 17, 2019. 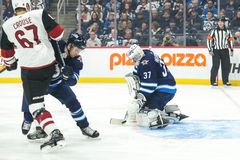 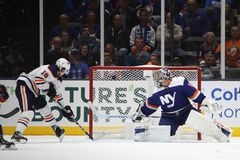