Matthew Tkachuk tried to pour cold water on his feud with Zack Kassian.

After not speaking to reporters following Wednesday’s practice, the Calgary Flames’ star winger and resident agitator made it clear 24 hours later he once again wouldn’t be answering questions concerning the continued fallout from Saturday’s heated game with the Edmonton Oilers.

“We’re not talking about them right now,” Tkachuk said Thursday morning ahead of his team’s matchup with the Toronto Maple Leafs. “We play them some time after (the all-star) break.

“You guys can ask us then.”

Tkachuk rocked Kassian – a bruising 6-foot-4, 211-pound forward – with two big and, according to the NHL, clean hits that twice sent Kassian’s helmet flying in the latest testy instalment of the Battle of Alberta.

In response to the second bodycheck, Kassian ragdolled Tkachuk to the ice and delivered a series of punches as Tkachuk turtled to protect his head.

The league responded by handing a two-game suspension to Kassian, who was critical of the 6-foot-2, 202-pound Tkachuk for playing a physical style and then not accepting a challenge to fight.

Kassian doubled down after news of his punishment dropped, saying of Tkachuk: “You play with fire, eventually you’re going to get burned.”

The 28-year-old felt the hits were “predatory” in nature and warned that he has a “great memory.”

“He messed with the wrong guy,” Kassian said Tuesday. “I don’t think he realizes we’re in the same division.”

Kassian’s first opportunity to return to action will be Jan. 29 against the Flames in Edmonton.

While clearly not wanting to add fuel to the smouldering embers, the 22-year-old Tkachuk danced around four separate questions Thursday morning as media members in one of hockey’s biggest markets tried to probe how far he was willing to go on the topic.

“I don’t let anything distract me,” he said of being the centre of attention. “I just focus on what I have to focus on, what the team has to focus on.”

Tkachuk is well-versed in getting under the skin of opponents – he’s had plenty of run-ins with Los Angeles Kings defenceman Drew Doughty – and this is no different.

“I don’t listen to outside noise,” he said. “We just go along with our business.”

Flames interim head coach Geoff Ward, whose team visits the Ottawa Senators on Saturday before its nine-day bye-week/all-star game hiatus, said it’s an asset to have Tkachuk’s combination of skill and sandpaper.

“We had the same situation in Boston when I was there with Brad Marchand – high-talented guy, can play the agitator role real well,” said Ward, an assistant with the Bruins for seven seasons. “You like having those guys on your team and you hate playing against them.”

Leafs forward Jason Spezza, a full-time NHLer since 2003, said the fact the bubbling tension between the Flames and Oilers was still a topic of conversation five days later shows how much the game’s changed.

This bad blood, however, certainly doesn’t appear to be going away any time soon.

Oilers centre Leon Draisaitl said earlier this week he’d “probably get off the ice” if forced to line up alongside Tkachuk – his Pacific Division teammate – at the upcoming all-star game’s 3-on-3 tournament.

“It gives people an opportunity to promote the game, write stories,” Ward said. “Both fanbases are into it. It makes for good conversation.”

With the Flames and Oilers neck-and-neck in the standings, Ward said getting close to the line is what players like Tkachuk thrive on.

And it’s not something he has any interest in seeing changed.

“He’s become an NHL player for reasons ... and part of that is the way that he plays.” 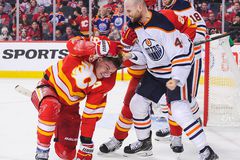 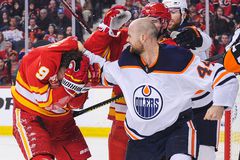