Sheldon Keefe saw an opportunity to give some of his veteran workhorses a breather.

The players tabbed by Toronto’s head coach to pick up the slack didn’t miss a beat, and Auston Matthews kept doing what he’s done most of 2021 – put the puck in the back of the net.

The sniper scored his NHL-leading 36th goal of the season Thursday as the North Division-topping Maple Leafs defeated the Vancouver Canucks 4-1 for their fourth straight win.

Playing a second game in as many nights after clinching a playoff spot with a decisive victory in Montreal over the Canadiens some 24 hours earlier, Toronto rested minute-chewing defencemen Morgan Rielly and Jake Muzzin, winger Nick Foligno and netminder Jack Campbell.

The newly-acquired Ben Hutton, who came over from the Anaheim Ducks prior to the trade deadline, and 2017 first-round pick Timothy Liljegren slotted in on the blue line, but a bigger storyline was the responsibility handed to Rasmus Sandin on the Leafs’ top pair with T.J. Brodie.

The club’s 2018 first-rounder, Sandin broke his foot in the American Hockey League this season and had a long road back with a crowded depth chart, but once again looked comfortable in picking up an assist and playing a career-high 21 minutes 39 seconds.

“I don’t know where to begin,” Matthews said when asked to dissect the 21-year-old’s game. “He’s really good ... he slows the game down, he’s got so much poise and skates extremely well, sees the ice extremely well, makes great passes. He’s been playing great for us.

“Some more responsibility tonight and he didn’t shy away.”

Keefe said handing Sandin more of the reins made sense given the circumstances.

“He was excellent,” said the coach. “And T.J. Brodie, I thought, pairing with Rasmus was exceptional.”

Mitch Marner, with a goal and an assist, William Nylander and Pierre Engvall provided the rest of the offence for Toronto (32-13-5). David Rittich, who got the start in place of Campbell, made 15 saves to pick up his first victory since being acquired from the Calgary Flames ahead of the trade deadline.

Matthews hit the 60-point mark for a fifth straight season and would be on pace to score 64 goals in an 82-game season.

The 23-year-old’s 11th game-winner also matched Tod Sloan for the second most in a single season in franchise history behind Charlie Conacher’s 13.

“Pretty fortunate to play with some pretty good players,” said Matthews, who’s closing in on his first Maurice (Rocket) Richard Trophy as the league’s top goal scorer. “Myself and Mitchy, our chemistry’s grown quite a bit. He’s an unbelievable player. I don’t think he gets enough credit for what he’s able to do out there. He’s a special talent.”

Jason Spezza added an assist to pass Richard and sit alone in 99th spot on the league’s all-time scoring list with 967 points, while the Canucks’ 16 shots were the fewest allowed by the Leafs this season, besting the 18 surrendered to Calgary on March 19.

J.T. Miller replied for Vancouver (19-22-3), which has lost four of five and remains 10 points back of Montreal for the division’s fourth and final playoff berth with four games in hand. Braden Holtby made 20 saves.

“We definitely got better as the game went on,” Canucks head coach Travis Green said. “There’s a couple plays we’d like to have back.”

After beating Toronto two straight in Vancouver following their COVID-19 outbreak that saw 21 players and four coaches test positive, the Canucks came in having lost three of their last four in regulation to the Ottawa Senators, including Wednesday’s 6-3 loss in the nation’s capital.

The first period started with a bang as Leafs winger Wayne Simmonds fought Canucks defenceman Alexander Edler in response to the latter’s knee-on-knee hit on Zach Hyman on April 18. Edler was suspended two games for the incident, while Hyman was diagnosed with a sprained MCL that was expected to keep him out of the lineup at least two weeks.

“Little things like that are in the fabric of our game,” Keefe said of Simmonds challenging Edler. “I think his teammates appreciate it, recognize it.”

The Leafs carried a decided edge in the opening 20 minutes, but just two of their first 16 shot attempts found the mark, including Brodie’s effort off the crossbar.

Toronto finally found the range with 4:31 left in the period when Vancouver defenceman Quinn Hughes couldn’t get the puck out of his zone. Alex Galchenyuk quickly found Nylander, who made no mistake for his 16th goal of the season, and second in as many games.

After bagging his 35th on Wednesday, Matthews added another when he took a pass from Marner on a 2-on-1 and one-timed a shot past Holtby just 51 seconds into the second.

Vancouver rookie Kole Lind – the 33rd pick the 2017 draft who made his NHL debut – collected just his team’s third effort on goal of the night shortly thereafter, but Engvall finished off a nice passing play with Spezza and Sandin at 2:56 with his fourth to make it 3-0.

The Canucks finally showed some life as the period wore on, and Miller got one back with 4:24 left in the period when the puck ricocheted to the winger on a power play for him to make no mistake by burying his 11th on Rittich, who allowed five goals on 28 shots in an ugly loss to the Vancouver on April 20.

“I had a chance to spend a little more time with my teammates and with the staff,” said Rittich, who got the game puck from Marner at the buzzer. “It was for sure helpful ... I feel way better.”

The Leafs rounded out the scoring with 54.9 seconds left in regulation when Alexander Kerfoot stole the puck from Holtby, who had been on the bench for an extra attacker, and fed Marner for his 18th.

“A big bounce-back performance for everybody [from] the last time we played these guys,” Matthews said. “A well-deserved two points.”

Vancouver hasn’t won in Toronto since December 2011 when Leafs assistant coach Manny Malhotra was in the Canucks’ lineup. ... Toronto improved to 4-3-1 against Vancouver in 2021. The teams conclude their nine-game season series Saturday back at Scotiabank Arena. 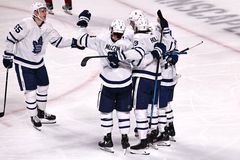 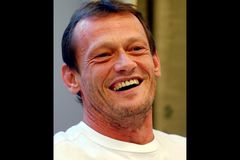 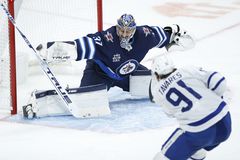