Auston Matthews scored the winner on a third-period power play Thursday as the Toronto Maple Leafs defeated the Edmonton Oilers 4-3.

Jason Spezza, with a goal and an assist, William Nylander and Wayne Simmonds also scored for Toronto (7-2-0), which has won four straight and six of its last seven.

The Leafs and Oilers – who split a pair of games in Toronto last week that failed to produce the expected fireworks with the likes of McDavid, Matthews, Draisaitl and Mitch Marner sharing the same ice surface – will go right back at it Saturday in Edmonton for the fourth of nine meetings between the teams in this season’s all-Canadian North Division.

After Toronto surrendered leads of 2-1 and 3-2 earlier in the third, Matthews put the visitors up for good when he ripped his fifth of the season, and fourth in as many games, on a man advantage with 6:24 left in regulation.

Koskinen then stretched to stop Marner on a 2-on-1 off a pass from Matthews to keep his team in the fight.

Edmonton got its seventh power play with under three minutes to go when Nylander went off for tripping, but couldn’t find the tying goal with Koskinen on the bench as Draisaitl hit the post from a sharp angle on his team’s best chance.

The Oilers tied things 2-2 seven minutes into the final period when Draisaitl poked home his second of the night and sixth of the campaign on an Edmonton man advantage.

The Leafs responded just 53 seconds later when Simmonds scored his third of the season, and third in as many games, when he tipped Marner’s shot on a Toronto man advantage.

But the Oilers battled back once again at 11:11 when Kassian picked up his own rebound off a deflection to deposit his first.

After sweeping a two-game set in Calgary against the Flames to kick off their swing through Alberta, the Leafs opened the scoring at 9:31 of the first Thursday when Spezza snapped a 27-game goal drought dating back to Feb. 7, 2020. The 37-year-old, who had an assist in each of his two previous games before sitting Tuesday, shovelled a shot past Koskinen after the Edmonton netminder coughed up the puck behind his net.

The Oilers, who were coming off Tuesday’s 6-4 loss in Winnipeg that saw Edmonton go up 3-1 before the Jets scored four straight to secure the win, had a couple of good chances to get even later in the period, but Andersen denied Dominik Kahun on a 2-on-1 before Draisaitl missed a wide-open cage.

Toronto doubled its advantage with 1:38 left in the first just as a power play expired when John Tavares took a pass from Spezza and found Nylander at the lip of the crease to score his third of the campaign, and first since opening night.

The Leafs took four straight minor penalties in the second period, but the Oilers couldn’t do much with those chances until Alexander Kerfoot went off for a slash that had Toronto head coach Sheldon Keefe asking for an explanation. Zach Hyman was then whistled for tripping to set up a 5-on-3 power play for 1:30.

Draisaitl, who had goals in four straight games, rattled a shot off the post early in the man advantage, but got another opportunity from the same spot and wired his fifth past Andersen at 18:11.

The Toronto goalie, who came in with a career record of 6-0-0 in Edmonton, made good stops on Darnell Nurse and James Neal earlier in the second before Draisaitl finally broke through.

Notes: The Leafs tied for the league’s fewest one-goal victories last season with 10. … Koskinen has played every minute for Edmonton this season with fellow netminder Mike Smith out injured. … After wrapping their series with Toronto on Saturday, the Oilers will welcome the Ottawa Senators for two contests Sunday and Tuesday. … The Leafs’ next action after departing Alberta is next Thursday for the first of three straight at home against the Vancouver Canucks. 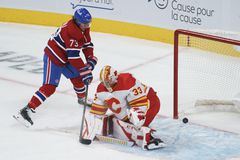