When asked to give an example of what it was like playing for Mike Babcock, Chris Chelios recalled a New Year’s Day outdoor game at Wrigley Field.

Chelios was nearing the end of his career. He’s from Chicago. He’d been averaging about 10 minutes a night that season.

But, according to Chelios, Babcock decided to make him a healthy scratch. Why?

“Because he knew it was my hometown,” Chelios told the Spittin’ Chiclets podcast.

Detroit’s then-general manager, Ken Holland, intervened and forced Babcock to play Chelios. Babcock’s solution? He dressed seven defencemen, sent Chelios out for the first shift and then benched him the rest of the way.

Chelios didn’t tell the story with much emotion. If anything, he made it sound like a normal thing to do. The abnormal thing was the fact he was telling it.

Two weeks ago, after the Maple Leafs had fired him as head coach, Babcock’s professional reputation was a little dinged up.

Once the story about Mitch Marner’s list leaked out, it was in need of some repairs.

On a nearly daily basis, retired pros are popping by the shop to help crush his reputation into a cube.

In an interview with a Swedish newspaper, former Red Wing Johan Franzen described the two polarities of Babcock.

“As a coach, he is extremely accurate and prepared,” Franzen said. “But then he’s a terrible person, the worst person I’ve ever met.”

Franzen had harder words, but Chelios is the harder blow. That’s because Chelios is the human you would end up with if you typed “professional hockey player” into a 3-D printer.

When someone with that sort of pedigree says teams in the modern NHL would be “crazy” to employ you, you’re finished.

Nonetheless, someone will want to try. Someone always wants to give the way-outside-the-box (i.e.: stupid) solution a go.

We can imagine the discussions going on right now in the executive offices of such a team: “On the one hand, he is a brand name and a proven winner. But on the other, the introductory press conference will just be me up on a podium being screamed at. Possibly by Mike Babcock.”

You fire and hire coaches to relieve pressure on your organization, not increase it. No GM is dumb enough to take that risk.

The mystery here isn’t how Babcock got away with it for so long. Sports are littered with unpleasant people who make successful coaches.

Sometimes that unpleasantness is their secret power. They either find a group of people who enjoy being goaded into excellence, or are so wretched to others they force the group to band together in order to resist them.

In hockey, it’s better to be seen as a jerk than a drip. It still is. That hasn’t changed.

What may be changing is at the heart of the Babcock mystery – why did NHL players put up with this treatment for so long?

Almost all of Babcock’s players were multimillionaires. Many were veterans. Several were future Hall of Famers. Yet the guys in this drama talk as if they were powerless to push back.

“I survived Babs for seven years by just shutting my mouth and doing what I’m told,” Chelios said.

That is all part of hockey’s culture of suffering. You exhibit your manliness by putting up with all sorts of pain – broken bones, fistfights, a boss who goes out of his way to belittle or provoke you. It’s all of a piece.

When you speak up, you’re not standing up for yourself. You’re whining. Would you complain if you caught a puck in the face? You would not. This is the same.

No one likes a whiner, especially in the NHL. If you’re properly tough, you endure. You outlast the guy. That’s the code.

Based on the last few days and Babcock’s free-fall from the top, the code is changing. It may require a full rewrite.

Players are finally waking up to the fact that the NHL isn’t junior hockey (where a coach can ruin your career).

They are realizing that the media aren’t just a nuisance. They’re a weapon they can use. A bulb has gone off and a thought bubble has appeared: “Wait a minute. Nobody pays to watch the guy in the suit.”

Like just about every other thing, the NHL missed this particular progression. It’s already happened in the other three big sports. Bullying went out of fashion years ago, not because bullying never works (it often has in the past), but because the stars of the show won’t put up with it.

Can you imagine an alternative Mike Babcock, one who grew up near a basketball court instead of a rink, telling LeBron James he is being scratched from the game in Cleveland? You cannot. It’s impossible.

NHL players remain afraid. They aren’t afraid of the coach. They’re afraid of their colleagues, of upsetting the system and suddenly finding themselves outside it.

That’s begun to shift. That shift appears to be picking up pace. We have yet to hear from any active star about something he isn’t happy about. But what was abnormal is becoming normal.

It’s a matter of time before someone wearies of the old way of doing things and pops his lid. Once that happens and he lives to tell of it, others will be empowered to do likewise.

In the end, that might be Babcock’s greatest legacy. Lots of hockey people have won a Stanley Cup. Very few have kicked off a revolution.

Opinion
Bill Peters’s pretend apology is a reminder of where hockey’s brand of ‘toughness’ will get you
November 28, 2019 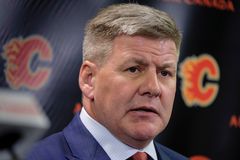 Opinion
Memories of Iron Mike: Abuse by NHL coaches isn’t new, and it comes in many forms
Subscriber content
November 29, 2019