Sonny Milano had an ideal debut with the Anaheim Ducks.

Milano netted the winning goal in overtime and finished with two goals, leading the Ducks to a 4-3 win over the Edmonton Oilers on Tuesday night.

Nicolas Deslauriers and Adam Henrique also scored for the Ducks, who snapped a five-game losing streak. Anaheim has earned a point in consecutive games after losing in overtime to the Golden Knights on Sunday.

John Gibson had 29 saves for the Ducks, who never trailed as Edmonton’s top scoring threats Connor McDavid and Leon Draisaitl were held without a shot on goal over the first two periods.

Tyler Ennis, Draisaitl and Andres Athanasiou scored for the Oilers. Mike Smith had 17 saves on 21 shots for the Oilers. Edmonton has a key Pacific Division game on the road Wednesday against the first-place Vegas Golden Knights.

Milano’s winner came at 2:05 of overtime, when he scored from just in front of Smith. Milano was acquired Monday in a trade with the Columbus Blue Jackets.

Milano gave the Ducks a 1-0 lead 5:46 into the game when he forced a turnover in the Oilers’ zone and pushed the puck toward the goal. He was able to chase it down and poked it to the left side of the net, past Smith. It was his sixth of the season.

Deslauriers made it 2-0 at 13:12 of the opening period when he scored from just in front of the Oilers’ goal after taking a perfect pass from the left corner from Jacob Larsson. It was Deslauriers’ fourth of the season.

The Oilers didn’t score their first goal until the 9:09 mark of the second period, when Athanasiou fed a pass to Ennis in front of the Ducks’ goal. McDavid earned a secondary assist on the goal, Ennis’ 15th. Athanasiou was acquired Monday in a trade with the Detroit Red Wings.

Draisaitl tied the score 2-all at 4:23 of the third period when he fired a shot from the right circle off a pass from Ryan Nugent-Hopkins. It was Draisaitl’s 37th goal of the season. It was also the Oilers’ 55th power-play goal of the season with Draisaitl earning a point on 40 of them.

Henrique gave the Ducks a brief 3-2 lead at 12:33 of the third period when he took a pass from Danton Heinen in the slot, made a pair of moves and put the puck past Smith for his 24th of the season. Heinen was acquired in a trade from the Boston Bruins on Monday.

The Oilers tied it 3-3 less than three minutes later when Athanasiou scored his 11th of the season and first with the Oilers off a pass from Ennis. 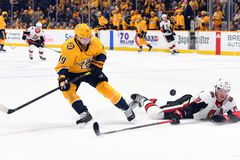 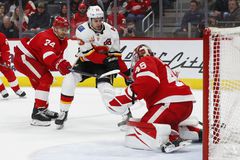 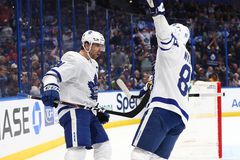