The toughest job in this country the last couple of years has not belonged to Dr. Theresa Tam, Prime Minister Justin Trudeau or any of the premiers.

No, the hottest seat in the job market belongs to Marc Bergevin, the general manager of the Montreal Canadiens, who are the only hope this country has of bringing the Stanley Cup home in 2021.

The team Bergevin put together over the nine years he has been GM barely made the playoffs, but since then they have rallied from a three-games-to-one deficit against the hated Toronto Maple Leafs, swept the mostly-charming Winnipeg Jets in four straight and defeated the much-favoured Vegas Golden Knights in six.

Bergevin’s spunky team, unfortunately, did not get off to a great start in the Stanley Cup final, losing 5-1 Monday to a domineering Tampa Bay Lightning. The second game of the best-of-seven final will go Wednesday evening, also in Tampa Bay.

Canadiens look to regroup after tough opener against Lightning

Bergevin has become a familiar face through these playoffs, often showing up in his lucky red suit and his pandemic flow equal to the hair Guy Lafleur lost on those glorious 1970s rushes.

Assistant coach Luke Richardson, who is currently in charge of the team with interim head coach Dominique Ducharme currently isolating after testing positive for COVID-19, has described his boss as “passionate,” but even that word doesn’t encapsulate what was on display last Thursday as his team eliminated the Golden Knights and was headed into the final. Red suit like a matador’s cape, wavy hair flying, the GM raced to the bench with hugs for the players – especially team captain Shea Weber and goaltender Carey Price, whom he also kissed through Price’s goalie mask.

It seemed only appropriate, as Weber and Price are today his lucky stars – no longer the albatrosses some were claiming as Bergevin’s team was on its long and rocky road to respectability.

The Montreal Canadiens are expected to win by their fans. They are the only team with 24 Stanley Cup banners hanging from the rafters. They were the last Canadian team to win the Cup, back in 1993, and many are looking for 2021 to present that coveted 25th championship.

This is all taking place in Bergevin’s hometown, Montreal, where hockey matters more and is more examined than politics. It wasn’t that long ago, in fact, that Quebec Premier François Legault took to Twitter with his personal thoughts about Bergevin’s team. “Big challenge in 2020: Should we trade Price and Weber?”

It is a question many have pondered. Both are on massive contracts – Weber has a cap hit of nearly US$8-million, while Price comes in at US$10.5-million this year – and both are reaching the Stanley Cup final for the first time in their careers. Weber is 35, Price 33.

When Bergevin traded the effervescent P.K. Subban to the Nashville Predators in 2016 for the dour, business-only Weber, it seemed at first a disaster. Subban became a Norris Trophy finalist and reached the Stanley Cup final, while Weber struggled on a weak Montreal team. Today, however, it is Subban who struggles, now with the New Jersey Devils, and Weber has been the key to Montreal shutting down the mostly-scoreless superstars of Toronto, Winnipeg and Las Vegas.

As for Price, he seems always a different goaltender during the playoffs, and has been responsible, more than any other player, for where Montreal now finds itself.

“They’ve been through a lot, those two,” Bergevin said on Monday’s Zoom call. “[Price], as a goaltender in Montreal – as we know, it’s demanding. There are a lot of expectations…

“[Weber], he came as part of a trade. And I know there’s lots of people that were guessing or second-guessing this transaction. And again, to get something that special you have to give up a good player. So, I’m not taking anything away from P.K., but to get Shea Weber here in Montreal, and what he brings on and off the ice for me, it’s special, and we’re four wins away from winning a championship.”

Bergevin, a journeyman defencemen for several NHL teams, once had a reputation as “the funniest man in hockey,” renowned for practical jokes on his teammates and even his coaches.

For the past many months, however, it has been all grim business as he launched what he termed a “reset” in 2018, determined to rebuild the team around the core of Price and Weber.

In his first draft of the reset, he and assistant GM Trevor Timmins went with Jesperi Kotkaniemi, who three years later scored the overtime goal that tied the opening series with the Maple Leafs at three games apiece.

Bergevin made some excellent trades – Max Pacioretty to Vegas for promising young centre Nick Suzuki and Tomas Tatar – and a few deals that went sour, such as sending superb young defenceman Mikhail Sergachev to Tampa Bay for forward Jonathan Drouin, who has not worked out in Montreal. A less noticed deal brought in checking centre Phillip Danault, who, after Price, may have been Montreal’s most-valuable player in the first three rounds.

Bergevin went after veteran additions such as Corey Perry and Eric Staal, picked up players such as Tyler Toffoli and Josh Anderson, and though there were early complaints there are none to be heard now.

A petition that began, “Marc Bergevin has ruined the Canadiens” has long since stopped picking up signatures. A trade rumour website that thought he wouldn’t last this long is now quiet.

Some thought Bergevin showed great courage in 2019 when he sat at the draft table and watched 14 teams pass on a 5-foot-7 162-pound college player. Then, with the 15th pick, he sent 6-foot-4, 229-pound Weber up to announce the name: Cole Caufield. Today, Caufield is one of the game’s fastest-rising stars.

The 2021 Canadiens started off well, but the moment they sputtered, Bergevin acted. On Feb. 24, he fired head coach Claude Julien and associate coach Kirk Muller, replacing them with Ducharme and Alex Burrows. When Ducharme tested positive for COVID-19 and went into isolation, he bumped Richardson up to “interim-interim” head coach. (Ducharme is now expected to be back behind the bench on Wednesday.)

“I said at training camp we mean business,” Bergevin said at the time. “We raised the bar…”

“I feel we have a team to make the playoffs. And then, once we get in, I feel that anything’s possible.”

So far, it has been just that. 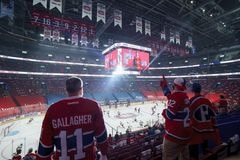 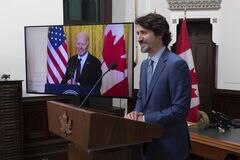 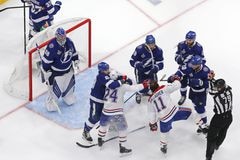