Morgan Rielly is the latest key Toronto Maple Leafs player to sustain a significant injury, and it could not have come at a worse time.

The team announced on Monday that its best defenceman will be out for at least two months with a fractured foot incurred during Sunday night’s 8-4 loss to the Florida Panthers. Rasmus Sandin was recalled from the American Hockey League’s Toronto Marlies to replace Rielly on the active roster.

Already playing with patched-up defence due to an injury to Jake Muzzin, the Maple Leafs have given up 17 goals over their past three games, all losses. They play again on Tuesday against the New Jersey Devils at Scotiabank Arena.

Rielly, 25, has battled a lower-body injury for much of the season. It has caused him to miss considerable practice time and has limited his effectiveness. He has 27 points in 46 games, but has not scored a goal since Oct. 22. That is a span of 34 games.

Muzzin has been out of the lineup since breaking one of his feet against the Devils on Dec. 27. The ragged defence corps now consists of Tyson Barrie, Cody Ceci, Travis Dermott, Justin Holl, Martin Marincin and Sandin.

The latter, a 19-year-old from Sweden, was selected by Toronto in the first round of the 2018 NHL draft. He recorded two assists in six games with the Maple Leafs to begin the year but was then sent down to the Marlies. He had two goals and 15 points in 19 games before being called up, and was named the top defenceman at the 2020 world juniors championship that ended on Jan. 5.

Toronto is currently sitting third in the Atlantic Division, but entered Monday only one point ahead of the Florida Panthers, who were occupying the second and final wild-card spot. Only the top eight teams in the Eastern and Western Conferences advance to the playoffs.

The Maple Leafs were run ragged by Connor McDavid and the Edmonton Oilers in a 6-4 loss a week ago, lost in a shootout to the Winnipeg Jets, and then were trampled by Florida in a game that was not as close as the four-goal margin would make it appear. Frederik Andersen was pulled on Sunday for the second time in three games after allowing four goals on 12 shots.

Rielly’s fractured foot joins an array of battered ankles, fingers, shins and shoulders that the team’s medical staff has been kept busy with. There has also been a gravely serious if freakish injury: Ilya Mikheyev’s lacerated artery and tendons that required emergency surgery. Mikheyev was accidentally sliced by an opponent’s skate blade in the same game in New Jersey where Muzzin was hurt.

Rielly joins Mitch Marner and John Tavares among the team’s top players to be sidelined this season. Marner, who was just named to the all-star game for the first time, missed 11 games with an ankle sprain and Tavares, the Toronto captain, missed seven with a broken finger. In addition, the Maple Leafs began the year without left winger Zach Hyman and Dermott, who missed 19 and 13 games respectively. Both underwent surgery in the off-season.

Another winger, Trevor Moore, has missed 22 games, most recently while suffering the effects of a concussion that occurred during practice just as he was about to come back from a shoulder injury.

Forward Andreas Johnsson, who missed 15 games after he blocked a slap shot off his shin against the Colorado Avalanche on Dec. 4, returned from the long-term injured list to play against the Panthers on Sunday.

Then Rielly went down and caused further havoc on Toronto’s back end. If Andersen has been subpar after carrying the team for a good portion of the season, he hasn’t received much help from his teammates on defence.

The possibility remains that the Maple Leafs might try to trade for a defenceman, and could do so without causing salary-cap issues by placing Rielly on long-term injured reserve. How would P.K. Subban, who is languishing in New Jersey, look in a Toronto uniform right now?

Rielly has been nowhere near as dominant as a year ago when he had 20 goals and 72 points, but has had his moments this season. He became only the second defenceman in the organization’s history to begin his career with seven consecutive seasons with 20 assists.

Now they will likely be without him until only a few weeks remain in the regular season. 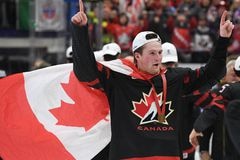 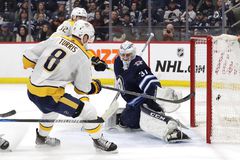