Natalie Spooner and Amanda Kessel have taken their hockey rivalry to the world of sequins and Salchows.

The two women normally do battle as members of the Canadian and U.S. women’s hockey teams, respectively.

But they’ve temporarily traded hockey skates for figure skates as participants in this season’s Battle of the Blades on CBC.

The show that pairs hockey skaters with figure skaters in a series of performances begins airing Thursday.

Tessa Bonhomme was the first female hockey player to compete in the reality TV show in 2011. She won that season with David Pelletier.

Kessel, from Madison, Wis., will perform with Olympic and world champion pairs skater Eric Radford. She is the sister of NHL player Phil Kessel.

Spooner and Kessel spoke to The Canadian Press about their experience so far on Battle of the Blades.

What made you want to do Battle of the Blades?

Kessel: “At first I said there was no way I would do the show. I can’t really dance, can’t figure skate and it’s scary to perform in front of people like that. I discussed it more with my agent and a little bit of time went by. I maybe needed a different challenge in life and was hesitant to push myself past that comfort zone. I thought it would be a really good opportunity. So far, it’s exceeded any expectation I had.”

Spooner: “Never in a million years did I think I would ever be figure skating. But it’s exciting, and I almost feel like a little kid out there trying to learn [the] moves and celebrating the small victories. Also knowing you can raise some funds and awareness for your charity.”

What’s the transition been like going from hockey skates to figure skates? Natalie, you’ve been switching back and forth a lot between hockey camps and the show.

Spooner: “I had never figure skated before, so I really didn’t know what I was getting myself into. It’s been tough. Going from my figure skates back to my hockey skates, I almost feel like I have no edges any more on my hockey skates. The first hockey drill, I went in and just ate it into the boards and just fell so hard.

Kessel: “It’s way harder that I thought. I’ve had my fair share of toe picks, but it’s not even that. Edges and turns. Figure skating in general is not really like hockey at all. I went a few days where I hadn’t really fallen, and at the end of a day where we’d been on the ice four or five hours and I fell three times in a row.”

Amanda, what does Phil think about it?

Kessel: “My brother had been to one of the [tapings] and sat in the front row. I think he’ll watch. He’s actually really into it, asking what moves or tricks I’ve learned. I think I enjoy the process so much that I can’t stop sharing it. He’ll be watching for sure.”

How do you feel about the prospect of wearing a figure-skating dress?

Spooner: “I haven’t had any outfits on yet. I’ve been skating in leggings and a sweater. Today, for the first time, I skated with my hair down, and it didn’t go great because my hair got stuck to my lipstick. I was up in my lifts trying to get my hair out of my face.”

Kessel: “I don’t wear a lot of dresses in general, and then to wear it while you’re performing, it’ll be interesting. I’ll have to let you know after the show.”

You are both members of the Professional Women’s Hockey Players’ Association working toward a financially viable and sustainable league for yourselves. Does your participation in Battle of the Blades help your cause in any way?

Spooner: “I think there’s still a lot of people who don’t realize we don’t have a league to play in this year, and also don’t realize we are still playing. A lot of people are surprised when I say I’m switching back and forth because I still have games and our games are this weekend. If we can even get that message out a little bit through this show and for them to follow us and realize we’re still playing, maybe we can get some of those fans out to our Dream Gap Tour.”

Kessel: “It’s definitely exposure. It’s only going to help and raise awareness of what’s going on in our sport, especially in Toronto, Canada, hockey is so big here. It’s good exposure to be in the spotlight a little bit more. I think people generally do care. They just don’t have the information. It will be great for us and USA Hockey and Hockey Canada as well.”

Battle of the Blades to return to CBC in the fall
Subscriber content
April 16, 2019 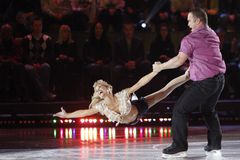