This classifies as fun for Frederik Andersen: Protecting a late lead in the third period by leaping out of his net to stop a shot with the handle of his stick.

“Doing whatever it takes to save it,” the Toronto goaltender explained after the 3-2 win on Monday over Boston. “Fun one.”

Going into the postseason, there were some reservations concerning goaltenders Andersen, Philipp Grubauer of Colorado and even Pekka Rinne of Nashville. They have each responded in a big way, with Andersen, Grubauer, Rinne helping stake their teams to 2-1 leads in their first-round series.

All three are looking to come up clutch yet again in the fourth games of their respective series on Wednesday night.

Like Andersen, Rinne turned in a huge save in a 3-2 win on Monday over Dallas – sliding over from his knees to stop left winger Jamie Benn’s attempt with his left goalie pad.

“Every once in a while, he makes one like that where you roll your eyes and say, ‘How did he do that?'" Nashville defenceman P.K. Subban said. “He’s been doing that for a long time, though.”

Rinne, the reigning Vézina winner, wasn’t exactly vintage Rinne a year ago in the postseason, allowing 21 goals in a second-round series loss to Winnipeg that extended to seven games. So far this season, Rinne has a 1.98 goals-against average against Dallas and a .936 save percentage.

Now that’s more like Rinne, who led the Predators to the Stanley Cup Final in 2017.

“Peks [Rinne] made a couple unbelievable saves in the third there,” Nashville teammate Filip Forsberg said. “It’s what the playoffs is all about.”

Andersen entered the playoffs on the heels of a bad stretch to end the season, when he allowed 35 goals over his final 10 appearances.

He’s made 108 careers saves against Boston, although none bigger than his stop of centre David Krejci on Monday. Andersen lunged out of his net as Krejci made a move to the backhand. He kept his goalie stick close to the ice and had the puck deflect off the end.

The chants of his name by the fans only intensified.

“Playoff time, this building comes alive. It’s a special place to play,” Andersen said. “It makes you want to play even harder.”

A year ago, Grubauer started the first two games of the Stanley Cup title run for the Washington Capitals before surrendering the net to Braden Holtby. Grubauer was dealt to Colorado in the off-season, where he began the season as the backup to Semyon Varlamov. But Grubauer took over late and went 7-0-2 down the stretch to help the Avalanche earn the No. 8 seed. He’s allowed seven goals and made 90 saves against the Flames, the top seed in the Western Conference.

“We have to be in the moment, and I think we’re doing the right things right now,” Grubauer said after a 6-2 win, the second in a row for the Avalanche.

Holtby appreciates the grit of Grubauer.

“He’s too good of a goalie to not have success over time,” Holtby said. “It’s great for him. Obviously, he’s had an adjustment to a different situation, adversity he’s grinded through. He’s a strong guy mentally, so it doesn’t come as a surprise to any of us.”

At 5 foot 6, Predators centre Rocco Grimaldi is one of the shortest players in the NHL. He’s certainly coming up big in this series, scoring in consecutive games.

After going into the lineup for Game 2 – filling in when 6-foot-6 centre Brian Boyle had an appendix issue after Game 1 – Grimaldi had his first career playoff goal on Saturday with a stick coincidentally named “Frankie” – on the three-year anniversary of the death of his grandfather Frank. He added another goal, with a different stick, in Game 3. 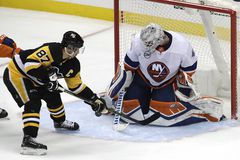 ‘No easy shifts’ as first-round of NHL playoffs gets tight and nasty Subscriber content
April 14, 2019 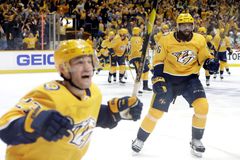 The kids are all right: Youth making its mark early in Stanley Cup playoffs
April 12, 2019 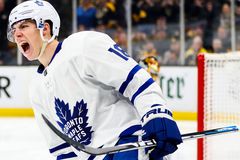