Bo Horvat bid an emotional farewell to his wife and newborn son earlier this month.

The captain of the Vancouver Canucks then got on a plane and headed west, unsure of when he’ll see them next.

“I knew it was going to be tough, but you don’t know until it actually happens,” said Horvat, who left Holly and little Gunnar, born June 28, back home in Ontario. “One of the toughest days I’ve ever had to go through, leaving your family behind.”

If they haven’t done so already, NHL players across North America are set go through something similar on Sunday before setting up shop in the hub cities of Toronto and Edmonton for the league’s 24-team restart to its pandemic-hit season.

There will no doubt be tears and hugs. Once inside those secure bubbles, players will be locked down and segregated from the general public in hopes of keeping COVID-19 at bay.

FaceTime and video-conferencing platforms will have to do when it comes to staying in touch with loved ones.

“This is part of the game right now,” said Toronto Maple Leafs defenceman Jake Muzzin, who has a wife and one-year-old daughter. “You want to be away as long as we can because that means you’re doing well and you’re going on.

“It’ll be tough leaving the family, but I’m committed to leaving and going as far as we can.”

Immediate family members – spouse/significant other and children – will be allowed inside the Edmonton bubble for the conference and Stanley Cup finals beginning some time in early September. But when taking into account the qualifying and round-robin portions of the restart, that’s still upwards of six weeks apart.

“You want to be there in those early ages, early years to bond with them and help out as best you can,” Horvat said of being away from his son. “But under these circumstances, what can you do?

“It’s the new normal nowadays, and we’ve got to live with it and think of the positives.”

Toronto centre Jason Spezza floated an idea during negotiations between the league and the NHL Players’ Association that likened the initial period in the bubble to the annual world championships when families are kept separate from teams before eventually being reunited later in the tournament.

“There was a large group of guys that were worried about being away,” said Spezza, who has a wife and four daughters. “It’s a good way to sell it to guys that it’s something we can do and pull off and the families can handle.

“But there’s no doubt there’s going to be some missing the families during this.”

He also stressed players are fortunate to be in this position given the devastating impact the novel coronavirus has had around the world.

“‘Sacrifice' is a tough word to use,” Spezza said. “This is a choice. We’re choosing to go away and play. There’s a lot of people that sacrifice a lot more.”

Washington Capitals goalie Braden Holtby joked that after more than four months at home, his wife and two kids are probably sick of him.

“That’s part of our profession,” he added of being apart. “It’s going to be a little more time away, but realistically in playoffs you’re gone basically the whole time anyways, even game days at home you barely see your family.

“It’s not going to be too different, but [the family is] planning to go see grandparents, so I’m old news at that point.”

While players on teams advancing to the third round of the playoffs will have a chance to reconnect with family following a quarantine period, it’s a different story for coaches. They’ll have to rely on technology to stay in touch for the entire restart.

“It’s such a tough thing, right?” said Toronto head coach Sheldon Keefe, who’s married with two sons. “You miss them and you love them, and the greatest challenge of all of this is the harder you work and the more success you have, the [longer] you’re are apart.”

Much like Horvat, a number of other NHLers have already said goodbye to family, not wanting to risk travel to their teams’ home cities for training camp.

Carey Price’s wife posted a touching picture to social media of the Canadiens goalie hugging their two daughters on an airport tarmac in Washington state before he flew back to Montreal alone.

“At this time in their lives they’re growing quickly,” Price said. “That makes things a little more difficult, but we’re dealing with it.”

Every player had the chance to opt out of the resumption of play without penalty, and Edmonton Oilers goalie Mike Smith said it was a difficult decision to leave his young family behind.

“I had some pretty upset kids when I told them I was going to Edmonton and they were staying,” he said. “That was a hard choice, a hard decision.”

“The hardest day was leaving my house in Sweden,” Flames centre Mikael Backlund said of heading to Calgary without his wife and daughter. “We’re all fully committed and we’re all sacrificing something to be here.

“We’re all doing it hoping to raise the Cup.”

That’s what Horvat told himself after leaving his wife and little one behind.

“The not knowing when you’re going to see them again is the biggest thing,” he said. “But hopefully by the end of this, I’ll be putting him in the Stanley Cup.

“And everything will be all right.”

Jack McIlhargey remembered as one of most ‘respected and loved’ Canucks
July 21, 2020 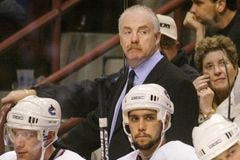 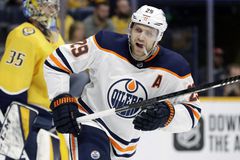 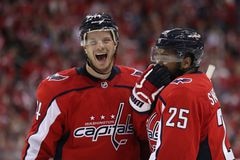