The Oilers exacted a smidgeon of revenge on Monday night, beating the Maple Leafs 3-2 in overtime at Scotiabank Arena.

Darnell Nurse whipped a wrist shot past Michael Hutchinson 17 seconds into the extra period to give Edmonton its third victory over Toronto in the last of this regular season’s nine games between them.

Connor McDavid shovelled a pass across ice to Nurse to set up the deciding goal. It was a career-high 12th for Nurse, and extended McDavid’s points streak to 11 games.

Toronto was bidding for its fifth straight win over the Oilers, whom it edged in overtime on home ice on Saturday. The Maple Leafs lead the NHL’s all-Canadian North Division over Edmonton by two points and Winnipeg by three. The Jets were also on the evening’s schedule. They played a late game in Calgary with the Flames.

Hutchinson got the nod in goal over second-stringer Jack Campbell, who is plagued by a lower-body injury. Campbell was already starting in place of Frederik Andersen. The No. 1 netminder is also troubled by lower body pain and does not seem near ready to resume play.

Toronto’s goalkeepers are so banged up that newcomer Veini Vehviläinen dressed as Hutchinson’s backup. The Finn, who would officially be No. 4 on the depth chart, has participated in only two on-ice sessions since he finished a 14-day quarantine period following a trade from Columbus.

Hutchinson did not play badly, just not well enough to win. He made 20 saves but was outshone by Oilers goalie Mike Smith, who stopped 29 of the 31 shots he faced.

“[Michael] did his job for us,” Toronto coach Sheldon Keefe said. “He kept them at two goals and when you keep them to two goals through regulation, that’s enough for you to be able to win a game. We just couldn’t get that third goal that we needed.”

There has been a noticeable drop-off between Hutchinson and Campbell, who is 6-0 but sat out because his injury required more recovery time. Huthcinson entered the night 3-2 with a .922 save percentage and a 2.39 goals-against average through six starts, but had struggled since posting a shutout at Edmonton on March 1.

I felt good,” Hutchinson said. The first period we played really well and didn’t give up too much. As the game went on, I just felt more and more comfortable.

With the victory, Smith, 39, improved to 12-3-1. His biggest stop came against Toronto superstar Auston Matthews nine seconds into overtime.

Matthews scored his league-leading 23rd goal in the second period, when he spun and fired a wrist shot beneath the crossbar. Mitch Marner also scored for Toronto, his 13th of the season, in the first period.

The loss dropped the Maple Leafs to 22-10-3. Their next game is Wednesday at Winnipeg. The Oilers are 22-13-1. They play again on Tuesday night against the Canadiens in Montreal.

Edmonton came into the contest 14-2 when it scores first and jumped out to a 1-0 lead on a goal by Josh Archibald six minutes in. The feisty Edmonton forward out-skated Morgan Rielly on a rush and then backhanded the puck past Hutchinson.

It was Archibald’s sixth goal of the campaign and his third against Toronto.

Marner netted his goal on a 17-foot wrist shot to tie the score 1-1 with 12:01 left in the first period. Matthews then gave the Maple Leafs the lead a little more than three minutes later. His goal came after he was let open to the left side of the net. Marner got the assist.

While Marner and Matthews revved it up from the early going, McDavid and Draisaitl were bogged down by Toronto’s defence and unable to generate much of anything over the first 20 minutes. Edmonton was limited to six shots on net, while the Maple Leafs had 13.

Then Oilers knotted the game at 2-2 less than two minutes into the third. Kyle Turris was credited with the goal after a slap shot by Adam Larsson caromed off his right knee into the net. Turris had dressed in only three of the previous 18 games and scored his only other goal this season against the Jets on Jan. 24.

That set up the overtime heroics by Nurse, who started on the 3-on-3 in OT because Tyson Barrie had gotten banged up late in regulation time when he took an accidental skate to the face from Matthews.

Nurse is now tied with Victor Hedman of Tampa Bay for the most goals in the league by a defenceman. He also scored against Toronto on Saturday.

“You can look at the standings and say the top three teams have separated themselves from the rest, but I don’t look at it that way,” Nurse said earlier Monday. “When you look at our division, it is really tight from sixth place on up.

“At this point, I don’t think we are looking at this as jockeying for position in the playoffs. We still feel we can improve our game.”

There are things for the Maple Leafs to be concerned about, as well as they have done overall. Edmonton and Winnipeg have closed on them and now their goaltending situation looks precarious.

They have won six of nine against the Oilers but still have the slimmest of leads in the standings.

“Obviously, there’s a three-way battle right now for first place between us, Edmonton and Winnipeg,” Toronto forward Wayne Simmonds said. “Every single game every point’s valuable. We’ve got to make sure we’re doing all the right things. We’ve got to keep on our good habits and correct some of the things that we’re doing wrong.” 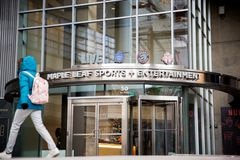 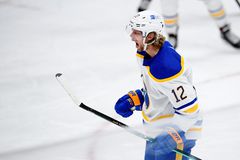