Two weeks ago, Ken Holland stepped aside as general manager of the Detroit Red Wings after 22 years so the position could be given to Steve Yzerman, one of Hockeytown’s favourite sons.

“One of the things I asked people to do for years was sacrifice, to play in the minor leagues for a season or to accept a little less money,” Holland explained Tuesday as he was introduced as general manager and president of hockey operations for the Edmonton Oilers. “I thought it was the time for me to sacrifice.”

Holland was rewarded for his loyalty to the Detroit organization by being given a cushy front-office job.

“I thought I was going to be a Red Wing for the rest of my life,” he said.

A few days later, while scouting players in Sweden at the under-18 world championships, the 63-year-old realized he still had the passion to be a general manager in the NHL.

“I got restless sooner than I expected,” Holland said.

It was about that time that Bob Nicholson, the Oilers’ chief executive officer, reached out to Holland and discussions began.

“It has been an emotional time for me the last couple of weeks,” Holland said during a news conference at Rogers Place. He had been part of the Red Wings family for 36 years. There is comfort in familiarity but perhaps not enough challenge.

“I realized the pull to leave and lead another team was greater than to stay and be a vice-president,” Holland said.

The Red Wings won more games than any other NHL team during his tenure and enjoyed a stretch in which they made the playoffs for 19 consecutive years. In Edmonton, he will preside over a team that has reached the postseason only once since 2006. The Oilers have won five Stanley Cups, but the most recent was in 1990.

“I am aware of the glory days here and the history of the franchise,” Holland said as he stood with replicas of those five Stanley Cups around him. “You can only live in the past for so long.”

He is the Oilers’ 10th general manager since 1979 and their fourth in the past six years. He replaces Peter Chiarelli, whose high-profile hiring in 2015 generated more headlines than headway.

Chiarelli brought in Todd McLellan as head coach but, with the exception of one season, the team continued to struggle. McLellan was replaced last November with Ken Hitchcock, another veteran with an outstanding coaching record, but Edmonton still missed the playoffs.

Now, with their fan base in near rebellion, the Oilers are starting over again. Promising to surround Connor McDavid with better teammates. Promising to get it right this time.

The situation in Edmonton has become so calamitous that Daryl Katz, the club’s reclusive owner, attended Tuesday’s proceedings and addressed the gathering. It is the first time he has spoken publicly in at least two years.

Katz has never spared expense when it comes to the team, and charged Nicholson with finding the best candidate. There are reports circulating that Katz ponied up US$25-million to secure Holland’s services for the next five years.

“When it comes to hiring someone with the experience, authority and credibility to make an immediate impact, nobody else comes close,” Katz said of Holland. “He commands respect from players, scouts and other executives throughout the hockey world, and he knows how to build a culture of winning.

“There are lot of bright young minds in hockey today – and I know that Bob talked to many of them, but at the end it became abundantly clear that Ken was by far the right choice.”

Katz then reached out to the team’s fans directly.

“We have not delivered on the promises we made in recent years,” he said. “We all know it. And while accountability falls on everyone in our organization, it starts and it stops with me.

“I want you to know we’re listening, and we’re doing everything we can to get it right. I know our fans don’t want plans or promises, they want results, and so do we. With our core players, prospects, Bob’s leadership and now Ken as president of hockey operations and general manager, we’re on track and we couldn’t all be more excited about the future.”

Chiarelli was fired in January, and replaced by Keith Gretzky on an interim basis. Wayne’s younger brother was among the final applicants for the job and may be offered another position within the organization.

Holland said he spoke Monday night with Hitchcock and informed him that he would not be returning as coach. A search for one will begin immediately, with meetings scheduled with the scouting staff next week.

“I believe in stability, loyalty and having and sticking to a plan,” Holland said. “I have to come in, find the right people on and off [the ice] and change the culture of the team. There is a lot of work to do.”

Holland said he is not overly concerned about salary issues because he says almost every team has them. He expects to add and subtract players but says the Oilers have a great foundation to build around.

McDavid led the NHL in scoring for two seasons and was second this year with 116 points behind Tampa’s Nikita Kucherov, who had 128. Leon Draisaitl of the Oilers was fourth with 105 points.

“It is very, very enticing,” Holland said. “We’ve got the best young centre in the world. That was significant in my thought process.

“It’s a great hockey market, with great young players with great potential. I felt this was a great opportunity for me.” 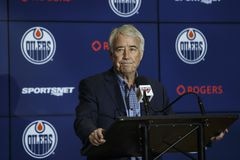