Pittsburgh
The Associated Press
Published May 16, 2021 Updated May 16, 2021
For Subscribers
Comments
Text Size
Please log in to listen to this story. Also available in French and Mandarin. Log In Create Free Account

The New York Islanders brought Kyle Palmieri home at the trade deadline believing his mix of grit and scoring touch would make a difference in the playoffs.

So far, so very good.

Palmieri knocked a fluttering puck past Tristan Jarry 16:30 into overtime to give the Islanders a 4-3 victory over Pittsburgh in Game 1 of their first-round series on Sunday.

The Long Island native collected a pass from Jean-Gabriel Pageau near the goal line and lifted it over Jarry’s left shoulder as New York beat the Penguins for the first time in five tries at PPG Paints Arena this season.

“I was brought here to try to help this team win,” Palmieri said. “Obviously, it’s just one game. Tomorrow, we’ll get back to work and get ready for Game 2. But it’s nice to start off on the right foot.”

Pageau and Brock Nelson also scored for the Islanders. Rookie goaltender Ilya Sorokin made 39 saves in his playoff debut and New York handed Pittsburgh its 10th loss in the franchise’s past 11 postseason games.

Game 2 is Tuesday night in Pittsburgh.

Sidney Crosby, Frédérick Gaudreau and Kasperi Kapanen scored for the Penguins, but the East Division champions couldn’t capitalize despite controlling play for most of the first two periods.

Jarry finished with 37 saves but had issues with his glove side. All four of New York goals sailed over, around or seemingly through Jarry’s left arm, though Pittsburgh coach Mike Sullivan declined to place blame for the loss at the feet of a netminder making just his second playoff start.

“I thought Tristan made some big saves throughout the course of the game to keep the game where it was at,” Sullivan said. “There were some good saves at both ends of the rink. I just think we have to do a better job as a group.”

The Islanders came in on their heels after finishing the regular season in a 6-6-3 funk, with none of the victories coming against playoff qualifiers.

In the end, it ultimately didn’t matter. Sorokin – just the second rookie goaltender in Islanders history to start the first game of the postseason – played spectacularly at times while filling in for injured Semyon Varlamov to help New York steal home-ice advantage.

“He’s a goalie, he’s a person, that has a lot of confidence and is super calm,” Pageau said of Sorokin. “You see him in practice, he’s a competitive guy. ... He’s a huge part of that win tonight.”

Even if it didn’t seem as if it would go that way at the outset.

The 25-year-old Russian appeared a little shaky early. While Palmieri gave the Islanders the early lead with a wrist shot from the right circle that Jarry couldn’t snag, Gaudreau tied it 11:10 into the first when he collected a rebound off his own shot and ripped it by Sorokin.

Crosby then picked up his 69th career playoff goal – and 190th career postseason point – with a sublime deflection in which he fended off New York defenceman Andy Greene and redirected the puck with just the tip of his stick.

The goal – which moved Crosby into a tie with Hall of Famer Brett Hull for seventh on the NHL’s career postseason scoring list – gave the Penguins a 2-1 lead 3:47 into the second.

“Just tried to get my stick on it,” Crosby said. “Didn’t know which way it was going to go. Fortunately, (Brian Dumoulin) put it in a good spot.”

Sorokin responded by settling in and giving his teammates time to collect themselves. New York eventually found its footing, playing the heavy, thudding game favoured by coach Barry Trotz. The Islanders pinned the Penguins down in their own end and kept firing away at Jarry.

Pageau’s wrist shot from the left circle zipped over Jarry’s glove 3:33 into the third to tie it and when Nelson knuckled the puck by Jarry, the Islanders appeared ready to steal the series opener.

Kapanen, however, responded less than a minute later. His fifth career playoff goal with 3:39 remaining shook the Penguins out of their doldrums and forced the extra period.

The Penguins played without Russian star Evgeni Malkin. The three-time Stanley Cup winner missed 23 games during the regular season with a lower-body injury but did appear in Pittsburgh’s final four games.

Joel Eriksson Ek’s goal at 3:20 of overtime lifted the Minnesota Wild past the Vegas Golden Knights 1-0 in Game 1 of their first-round series on Sunday. Wild goaltender Cam Talbot stopped all 42 shots he faced. Vegas’s Marc-André Fleury, the first goalie in NHL history to play in 15 consecutive postseasons, made 29 saves. After Vegas defenceman Alex Pietrangelo failed to clear the puck, Eriksson Ek was in the slot to send a shot that went off the skate of Golden Knights defender Alec Martinez and past Fleury. Game 2 is Tuesday night in Las Vegas.

Nic Dowd deflected in T.J. Oshie’s shot from the blueline 4:41 into overtime to give the Washington Capitals a 3-2 victory over the Boston Bruins on Saturday night in Game 1 of the first-round playoff series. The Capitals weathered the loss of starting goaltender Vitek Vanecek to a lower-body injury early on, with backup Craig Anderson making 21 saves without allowing an even-strength goal. Tom Wilson and Brenden Dillon also scored for the Capitals. Daniel Sprong and Anthony Mantha, making their playoff debuts, each had an assist. Jake DeBrusk and Nick Ritchie scored for Boston, and Tuukka Rask made 29 saves.

Opinion
Crosby’s time in Pittsburgh has been epic. Now please make it stop
Subscriber content
May 16, 2021 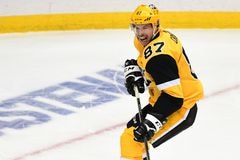 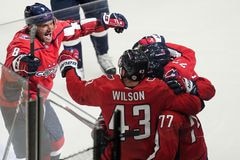 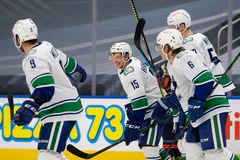