Patrick Kane got the Chicago Blackhawks off to a fast start. Robin Lehner kept them ahead at the finish.

Kane had two goals and an assist, Lehner made 53 saves and the Blackhawks struck early and then held off the Toronto Maple Leafs 5-4 on Sunday night.

Kane, Chicago’s 30-year-old offensive whiz, clicked with linemates DeBrincat and Strome to key the Blackhawks’ four-goal first period. Kane has four goals in three games and 11 points in his last six. He came out flying in this one.

“We had a really good start tonight, Kane said. ”It was fun to play like that.

“Kind of took our foot off the gas at the end, which isn’t something we need to be doing, but we’ll take the two points and try to keep going.”

Lehner stole the show at the end as the Maple Leafs took — and the Blackhawks allowed — a season-high 57 shots. That’s the most the 2019 Vezina Trophy finalist has faced in regulation.

William Nylander scored twice for the Maple Leafs, and John Tavares and Andreas Johnsson added power-play goals in the third as Toronto stormed back and outshot Chicago 26-7 in the final period. Auston Matthews had four assists for Toronto, which entered on five-game point streak (3-0-2) and lost in regulation for the first time in two weeks.

“It was a tough one,” Lehner said. “We had to battle together and get the final two points.”

Lehner was stung in the collarbone by a shot from Matthews late in the game, but hung in to preserve the win.

“It was just trying to keep the puck out of the net,” Lehner said. “Guys were blocking shots. We were all hurting a little bit. It was a team win.”

The Maple Leafs played without star forward Mitch Marner after he suffered a right ankle sprain in the second period Saturday night in a 3-2 home loss Philadelphia. Marner underwent an MRI exam and will be out of the lineup for a minimum of four weeks.

The 22-year-old Marner has four goals and 14 assists through 18 games. He led the Maple Leafs last season with career highs in points (94) and assists (68) and had a career-best 26 goals.

“Obviously, it’s tough to hear that,” Nylander said. “Hopefully, he’ll have a speedy recovery and, yeah, I’ve got to step it up here and down the stretch.”

Toronto’s troubles in this one were in its own zone, however. The Blackhawks jumped ahead 3-0 lead on its first six shots and led 4-1 after the first period.

“We didn’t start very good, obviously,” Toronto coach Mike Babcock said. “In the end we didn’t compete well enough to win. You’re right there and the end, but at the end you’re disappointed.”

Kane opened the scoring 5:18 in when his centring pass to Dylan Strome deflected in off the stick of Toronto defenceman Cody Ceci.

Dach made it 2-0 at 12:00 when he plowed toward the net and buried a fat rebound from the lower edge of the right circle.

Kane connected again just 10 seconds later for a 3-0 lead. Kane misfired from the left circle, but controlled the puck, cut across the slot and fooled Hutchinson with a backhander.

Nylander trimmed it to 3-1 with 3:31 left the first during a 4 on 4. He grabbed a loose puck from a faceoff, then swept into the slot and beat Lehner between the pads.

The Maple Leafs outshot the Blackhawks 16-15 in a scoreless second. Lehner made rapid-fire, point-blank skate saves on Matthews and Tyson Barrie early in the period to preserve Chicago’s margin.

Toronto pushed back in the third, outshooting Chicago 26-7

Nylander struck again at 2:27 of the third. He skated out of the left corner and beat Lehner with a rising shot on the short side.

Following a faceoff, Tavares stuffed in a power-play goal with 7:19 left to narrow it to 4-3. Lehner stopped Matthews’ high shot from the slot, but Tavares converted the rebound.

Saad’s deflection with 3:34 left made it 5-3, but Johnsson replied during a power play with 42 seconds remaining.

NOTES: Hutchinson entered with a 4-1-1 record, 1.33 goals against average and .961 save percentage in six previous games against Chicago, all while with the Winnipeg Jets. ... Chicago C Ryan Carpenter missed the game due to a death in his family. Dach, a rookie, took his spot in the lineup after sitting on Saturday at Pittsburgh. ... With Marner out, veteran C Jason Spezza was in the lineup after being scratched for three games.

Maple Leafs: At the New York Islanders on Wednesday night.

Blackhawks: At Vegas on Wednesday night. 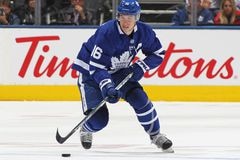