After keeping up his scoring touch to help Tampa Bay get a big road victory its Stanley Cup semi-final series, Brayden Point was especially proud of the Lightning’s defensive effort.

Point got the tiebreaking goal late in the second period, Andrei Vasilevskiy stopped 27 shots and the Lightning beat the New York Islanders 2-1 on Thursday night to take a 2-1 series lead.

The Islanders outshot the Lightning 8-5 in a tight third period, but couldn’t tie it. They pulled goalie Semyon Varlamov for an extra skater with about 1:48 remaining but couldn’t manage a shot on goal.”

“They had some control late, something to look at,” Point said “We still had guys sacrificing, blocking shots and all that good stuff. We’ll take the win for sure.”

Yanni Gourde also scored to help Tampa Bay improve to 6-1 on the road in the playoffs.

“We kept the game really simple,” Gourde said. “We managed the game for most part of the game and that was the key, especially in the third period. We closed the ice pretty well and we got the puck deep whenever we got the chance. I think that was very important for us.”

Cal Clutterbuck scored for the Islanders, and Varlamov finished with 23 saves.

Game 4 is Saturday night at Nassau Coliseum, with Game 5 back in Tampa on Monday night.

“Tampa’s good all around,” the Islanders’ Matt Martin said. “They’re the defending Stanley Cup champions and they know what it takes to win. ... They know what they have to do in their D zone.”

Both teams had chances in a fast-paced second period. The Islanders had some sustained pressure in the offensive zone midway through, but couldn’t beat Vasilevskiy. The goalie denied a shot by Adam Pelech with 6 minutes to go and Mathew Barzal hit a goalpost seconds later. Vasilevskiy then denied Barzal’s tip try.

“We have to get more pucks, we have to get inside,” Islanders coach Barry Trotz said. “We had some chances. Vasilevskiy made a couple of key saves. They didn’t have a lot tonight, I thought we were pretty good defensively as well.”

The Islanders tied it late in the second. Off a scramble for the puck in front of Vasilveskiy, Lightning defenceman Eric Cernak attempted to push the puck into the goalie. Clutterbuk and several players whacked at the puck and it went through Vasilevskiy’s feet and in with 2:22 left.

The Lightning regained the lead just four seconds after their power play expired in the final minute of the second. Point got the rebound of a point shot by Victor Hedman and whipped it in past Varlamov as he was falling to the ice with 18 seconds remaining. It was Point’s 11th of the post-season and extended his goals streak to six games. He has eight goals in the last nine games.

“I didn’t really take a look at it on the replay, but I think I just kind of got knocked down and the puck just kind of got on my stick and I slammed it into the net,” Point said. “I’m not sure how it went in. One of those lucky ones we needed tonight.”

The Lightning outshot the Islanders 9-7 in the first and got on the scoreboard first midway through the period. Blake Coleman’s shot from the left circle was stopped by Varlamov. Coleman got the rebound and sent a backhand pass across the front of the goal from behind the line, and Gourde knocked it in from the right side for his third of the post-season with 9:55 left.

The Lightning improved to 10-1 when scoring first this post-season. They are 0-3 when allowing the first goal. The Islanders dropped to 5-5 when the opponent scores first.

The Islanders have lost Game 3 at home in each of their three playoff series to fall into a 2-1 series deficit. They rebounded with three straight wins to advance past Pittsburgh in the first round and Boston in the second round,

“It’s just the way it goes,” Trotz said. “We’re going to have to look forward to the next game, next opportunity, see if we can get the next game and make it best of three.”

The Lightning have led 2-1 after three games in each of their series. They lost Game 3 in their first two series, against Florida and Carolina. However, those were at home after Tampa Bay won each of the first two games on the road.

JETS IN THE HOUSE AGAIN

A group of Jets players – including beer-chugging offensive lineman Dan Feeney – were among the 12,978 in attendance. Several Jets players including rookie quarterback Zach Wilson have attended a handful of Islanders playoff games together this post-season, and head coach Robert Saleh also recently was at a game.

Fleury, Price take the spotlight as Knights to face the Canadiens in Montreal
June 17, 2021
Canadiens defenceman Jeff Petry is the latest in a saga of NHL postseason toughness
Subscriber content
June 17, 2021 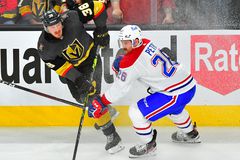 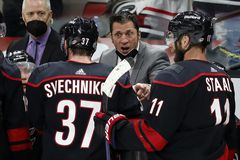