Harnarayan Singh didn’t set out to write about Don Cherry. A few years ago, when publisher McClelland & Stewart contracted the Sportsnet commentator and host of Hockey Night in Punjabi to write a memoir, they envisioned an uplifting tale: A small-town Alberta prairie boy who grows up in a traditional Sikh family to become an unlikely TV commentator.

But shortly before the manuscript was due, Cherry took that resentful swipe last November at “you people” who “come here … love our way of life … our milk and honey," and Singh was suddenly vaulted into the centre of an explosive national conversation.

After the flurry died down, he realized there was something more he needed to write. In “Poppies,” the penultimate chapter of One Game at a Time, which hits bookstores Tuesday, Singh reveals how the episode forced him to confront “the racism that I realized still existed in Canada.”

“I’ve been a guy who, personally, in my life avoids confrontation, and it’s a very touchy subject, because [Cherry] was an icon for the sport for so long,” Singh, 35, said earlier this week, over the phone from his home in Calgary, which he shares with his wife, his two young children, and his parents. “But at the end of the day, when your community is singled out, then you have to speak up and explain why people are offended. And basically the entire South Asian community was offended at that time, and it was a big deal because it sparked this conversation of, well, ‘Who Is Canadian?’”

While that conversation began in the hockey realm – and intensified over the winter as revelations of racism threaded through the sport spilled into the open – it merged this summer with full-throated calls for social justice roiling North American cities. And when major-league athletes across a number of leagues brought games to a halt late last month to protest against institutional racism, Singh was a leading voice on Sportsnet’s coverage, telling host Ron MacLean that fans who complained about such demonstrations, who snapped, “Just shut up and talk about hockey,” were in for a rude awakening.

The country, and the game at the core of its identity, seem to be at an inflection point that would have been inconceivable a few years ago: MacLean, Cherry’s long-time sidekick, is now using phrases such as “intersectional injustice.”

If hockey fans are finally ready to listen, Singh’s book has a lot to say.

Born in Brooks, Alta. in December, 1984, Singh writes that he grew up a “rowdy, talkative little troublemaker,” a hockey nut who arranged his parents’ living room into a makeshift rink and called play-by-play into a toy microphone. He and his sister, Gurdeep, who is seven years his senior, idolized Wayne Gretzky, switching their team allegiances as The Great One moved around the NHL, from Edmonton to Los Angeles to St. Louis to the New York Rangers.

Back then, Brooks was still a town, its population a shade less than 10,000, and Singh’s was the only family who wore turbans. In that setting, hockey was not just his first love; it offered, to a kid who looked different, a sort of superpower. Wearing an NHL jersey, or talking about the previous night’s game with classmates, he writes, “became common ground between us, and we were able to develop at least a mutual respect.”

That common ground occasionally felt illusory. Shortly after the attacks of Sept. 11, 2001, Singh went with a Sikh friend to a Calgary Flames game, where some fans accosted them with cries of “Taliban!”

Still, he pursued his dream, studying broadcasting at Mount Royal University in Calgary and hosting a hockey talk show called Power Play on the student radio station. While there, he notes, one of his teachers suggested he think about making a career in news, because of the lack of diversity in sports broadcasting.

But he landed an internship at TSN, and in the spring of 2008, while working part-time as a reporter with CBC Calgary, Hockey Night in Canada tapped him to be a colour commentator for an experimental Punjabi-language broadcast of the program that ran on the CBC Sports website during that year’s Stanley Cup final.

CBC revived the show for the 2009 playoffs, with a skeleton crew and a tiny budget. After a couple of bumpy years searching for a sponsor to pay the bills, the public broadcaster made the show permanent. And when Rogers took over the NHL broadcasts, HNIP found a natural home on the multicultural channel, OMNI. The show mixes Indian pop culture and WWE wrestling references into the play-by-play and other segments.

OMNI does not provide ratings – Rogers says the sample size is too small for a legitimate number – but according to Courtney Szto, an assistant professor at Queen’s University’s whose research focuses on issues of inequality and racism in sport, HNIP pulled in about 209,000 viewers on average in 2017 – a good showing for a niche broadcast. The show also crossed into the mainstream, when one of Singh’s manic calls for a goal by the Pittsburgh Penguins' Nick Bonino during the 2016 Stanley Cup final (“Bonino, Bonino, Bonino, Bonino, Bonino, Bonino, Bonino, Bonino, Bonino, Bonino – Nick Boneeeeeenoooooo!”) went so viral he and his on-air HNIP colleagues were invited to the team’s victory parade.

Perhaps most important for Singh, he hears from new Canadians who say it has helped them find common ground with others, and young kids from his community who bond over the games with their Punjabi-speaking elders.

“When the publishers first approached me, my reaction to it was: Really? Who’s going to buy a book about me?” Singh admitted. But, in time, he realized his story echoed others. “My editor on the book, he’s from Korean descent,” and during a Q&A with the publisher’s staff, “he became emotional talking about my book. That’s when it really hit home that there are so many parallels for so many Canadians out there.

“I’m a small-town kid with a turban, and so many people told me it wasn’t possible. But you know, if I can make it on television with who I am and how I look – then of course, it’s possible for any of you who are listening and watching.

“I think it’s also the story of nation building where, it really proves the power of sport. My experience growing up in Canada would have been drastically different had it not been for the sport of hockey and using the sport of hockey to create friendships and rapport amongst my fellow Canadian classmates.”

That’s why the twin battles that are unfolding now – the ones over Who Is Canadian, and Who Is Hockey For – are in fact the same fight. And it may be why some marginalized, racialized communities are so gratified to see hockey players, at long last, taking a public stand against intolerance.

“I would love to just be able to come on and talk hockey. My love for the sport shines through when I do get to talk about it. But at the same time, I will never decline to talk about this, because I think this conversation needs to be had.” 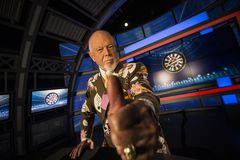 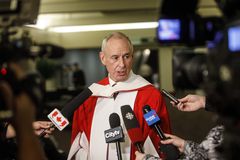