Jesse Puljujarvi was all smiles Tuesday after scoring his first NHL goal in more than two years.

Before the night was over, the big Finnish forward had added a second marker for the Edmonton Oilers, vaulting his squad to a 4-2 victory over the Ottawa Senators.

“It feels good,” Puljujarvi said simply after the win.

The 22-year-old right-winger has been working hard this season, creating chances for his teammates, said Oilers coach Dave Tippett.

Puljujarvi’s success follows a public split and reconciliation with the Oilers. Drafted fourth overall by the club in 2016, he spent the 2019-20 season playing in Finland after bouncing back and forth between Edmonton and the American Hockey League.

Puljujarvi came back to Edmonton over the off-season and Tippett said his reintegration to the team has been “seamless.”

“He’s a big guy, likes to have fun, he’s smiling all the time, he’s fit in very well in the dressing room,” the coach said. “I’ve just seen a good player that’s come in and he’s enjoying playing and enjoying his teammates.”

Playing on a line with Connor McDavid and Ryan Nugent-Hopkins seems to have helped.

McDavid set up Puljujarvi’s first goal of the night on Tuesday, sending him a pass near centre ice midway through the first period.

Puljujarvi muscled his way into the Sens zone and took a shot that was stopped by Ottawa netminder Marcus Hogberg. The Oilers winger followed up and buried a rebound in the yawning net for his first NHL goal since Jan. 6, 2019.

Evan Bouchard made his way on to the scoresheet 5:30 into the middle frame with a long shot that Puljujarvi deflected in for his second goal of the night. Bouchard registered his first NHL assist on the play.

The 21-year-old defenceman made his season debut on Tuesday after spending the fall playing in the Swedish Hockey League. Tippett dressed 11 forwards and seven defenceman to get Bouchard in the lineup.

Darnell Nurse and Leon Draisaitl also found the back of the net for Edmonton (6-6-0), while McDavid and Tyson Barrie each tallied a pair of assists as the Oilers swept the Sens in a two-game series.

Edmonton’s Gaetan Haas put the puck in the back of the net as time expired, but the goal did not count.

The Senators (1-8-1) got a goal from Cedric Paquette in the second frame before rookie Tim Stutzle added another with just 29 seconds left on the clock.

“You can see his desperation to help his team out,” Smith said.

“These guys care about each other. This young group is battling. It’s unfortunate that we haven’t been able to dig our way out of it but it’s not for lack of effort.”

Mikko Koskinen had 23 saves for Edmonton and Hogberg stopped 21-of-25 shots.

The Senators had ample opportunities to score with a man advantage, but failed to convert on five power plays as the squad’s losing streak stretched to nine games.

“At the end of the day, we’ve got to be better as a whole,” said Ottawa defenceman Erik Gudbranson.

“We’re putting ourselves behind the eight ball pretty early and they’re tough mountains to climb. Three-goal leads are next to impossible to come back from. You’ve got to keep it to two and we’re not doing that right now.”

The Senators will be back in action Thursday when they face the surging Canadiens in Montreal.

The Oilers have a brief reprieve before facing the Flames in the season’s first Battle of Alberta on Saturday.

Thomas Chabot returned to the Senators lineup after missing Sunday’s game with a leg injury. Koskinen made his 100th NHL start. Draisaitl and McDavid extended their point streaks to eight games. Draisaitl has 17 points (seven goals, 10 assists) across the stretch and McDavid has 19 (five goals, 14 assists). 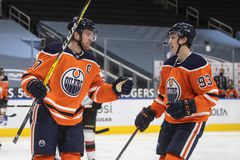 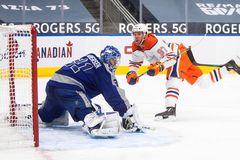 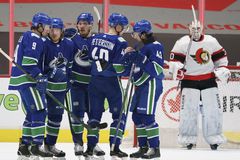