As finely honed, elite-level athletes, it didn’t take NHL players long to get back up to speed in their return to hockey.

For everyone else, it was always going to be a little more complicated, with complications that extend well past the limits of muscle, sinew and cardiovascular systems.

Life inside the NHL bubble in Edmonton may be something of a hockey utopia for those who like to focus on the sport at the expense of everything else. But for the rest of society, returning to the rink in the midst of a pandemic involved making decisions in conjunction with families, as well as getting used to new rules and routines designed to promote player safety and well being.

That was the situation for Dan Smith, a recreational player in the Vancouver area who has been running a beer-league hockey team for the past 20 years in the Adult Safe Hockey League. As the father of two young children, the 38-year-old commercial realtor had to talk with his wife about the measures that the facilities he would play out of had put in place. Those included prearrival questionnaires, one-way systems inside the rink and physically distanced dressing rooms.

But while Smith and his wife felt the risk was “relatively minor,” some of his teammates felt differently in a province that still had about 1,700 active cases as of Thursday.

“There’s one guy who has diabetes on the team and he decided to sit out,” he said. “And there are others who have parents that maybe are susceptible and they would rather be able to, with a clear conscience, visit them than visit the rink.”

After running two teams over the summer to comply with the eight-skater limit imposed by the league, Smith has been able to pool his resources for the fall season, which began last week. The league has also relaxed some of the on-ice rules, meaning that the four-on-four game that the ASHL piloted over the summer has been replaced with the more traditional five-on-five game, resulting in rosters of 13 skaters in addition to a goaltender.

In addition, while all penalties were replaced by penalty shots for the summer, now the first penalty results in a player sitting in the box, with subsequent infractions resulting in penalty shots. Offsides, which had been determined by the halfway redline instead of the traditional blueline to open up space in the offensive zone, have gone back to the blueline, with the redline now becoming the limit of the offensive zone once the zone has been gained.

And faceoffs, which had been replaced by a turnover of possession to the non-offending team from June until August, are back, but only at five of the nine dots.

Among the changes Smith particularly enjoyed the lack of faceoffs as he felt it sped up the game, resulting in a bit more cardio for the participants. Its benefits didn’t just extend to the players.

“One part of the game moving forward I think that’s a positive coming out of this COVID thing is a lot of referees are going to lose a lot less teeth like me with sticks coming up off the draw,” says Steve McNeil, a recreational-level referee based in the Greater Toronto Area. “When I smile I look like Dave Keon’s illegitimate nephew.”

Rules aside, the impetus to restart the ASHL – which has more than 60,000 participants playing in 14 facilities across Canada – began in May.

Joey St-Aubin, the president and chief executive officer of Canlan Ice Sports Corp., which operates the league, says that experimenting with new rules and implementing new rink guidelines was essential to instill confidence in the hockey-playing community.

“We wanted to use this as a test ground,” he said. “Not only for ourselves, but for the hockey world at large so that we can learn from this because if COVID doesn’t go away anytime soon and we’re faced with restrictions, we don’t want to be sitting on our hands.”

While a lot of city-run rinks are taking a more cautious, wait-and-see approach – one that will extend to opening outdoor rinks this winter – as a privately run enterprise, Canlan was able to get a head-start on returning to play.

St-Aubin said his organization has added seating in and around the dressing rooms to aid in physical distancing, although on-site showering is still forbidden. It has also created a new staff role in the form of a zone-control attendant, whose responsibility is to make sure that those entering the facility are symptom free and aware of the new protocols.

On the ice, players are encouraged to wear a full face shield, although a half-visor is still the minimum requirement to play.

“Face coverings were contemplated, but there wasn’t enough evidence that this was going to mitigate any risk and it could in fact be problematic for those that are short of breath to begin with,” St-Aubin said. “We didn’t want to solve one problem and then create another.”

Medical opinion on the use of visors as a way to minimize risk of COVID-19 infection is that the jury is very much still out, particularly given the ventilation built into the equipment to make sure that players get an ample supply of oxygen during their games.

Isaac Bogoch, an infectious-diseases doctor based at Toronto General Hospital, consulted with the NHL Players' Association on the NHL’s return-to-play protocols. A recreational player himself in non-pandemic times, his opinion is that it’s “unlikely” that visors are going to help.

But he adds that getting back to play hockey, or any other sport, is extremely beneficial in the current climate, and putting measures in place to minimize risk is the best that recreational leagues can realistically hope for.

“People have to understand that aiming for zero-per-cent risk is unattainable and all of these measures just incrementally add up to reduced risk. But of course it’s not going to eliminate risk.”

A lot of rinks, particularly the city-run ones, are waiting to see if there’s going to be a second wave of COVID-19 that might hit as the calendar hits October, the weather turns colder and flu season starts to become an additional concern.

Bogoch says the viability of hockey in the coronavirus climate is tied to transmission rates. As a result, playing in recreational leagues through the winter will always be affected by that reality.

“What’s safe in August might not be safe in October,” he said. “[Safety measures] will help reduce the risk, but if there’s high rates of community transmission, all bets are off and then you might have to call it a day, unfortunately.”

Much like line changes, the present reality of recreational hockey is that leagues, players and organizers are “learning on the fly,” as Tyler Broderick, communications co-ordinator at Canadian Adult Recreational Hockey Association, put it.

As a governing body that operates in all 10 provinces, CARHA has had to operate in an environment of constant fine-tuning, tweaking rules to correspond with differing protocols on a province and city basis, offering three-on-three as well as four-on-four options.

Since the start of the pandemic, CARHA has had to update its league guidelines six or seven times. But while Broderick doesn’t believe it will be forever, staying flexible is key to operating in the present.

“I think there is going to be a day when we can go back to the way things were, I imagine and I hope,” he said. “Who knows when that day will be but I think right now this is the reality for the foreseeable future.” 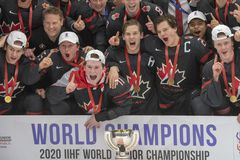 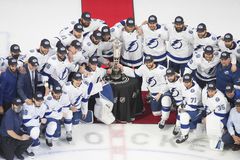 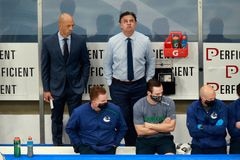