When the Florida Panthers were deciding whether the time was right to retire Roberto Luongo’s number, the initial vote was not unanimous.

Luongo was the holdout. He needed convincing.

Odd as this sounds for someone who has been in hockey’s spotlight for more than half his life, Luongo shuns attention. Doesn’t need it. Doesn’t want it. And that was the primary holdup in this process of deciding when the Panthers were going to send Luongo’s No. 1 jersey to the rafters and make him the first player in franchise history to receive that distinction.

On Saturday, whether he likes it or not, it’s all about Luongo – as it should be.

“I’m extremely honoured, don’t get me wrong,” Luongo said. “It’s a great honour and being the first player, all that stuff, is great. And in the last week, it’s gotten a lot more real to me with people getting here and getting tickets and going over my speech and all that. I’m going to make sure that I embrace it because it is special.”

The Panthers are going all-out: They picked a game against Montreal, Luongo’s hometown team, for the ceremony. The ceremony to retire Luongo’s number will begin two hours before Saturday night’s game, the Panthers will warm up for the game all wearing No. 1 jerseys, the team is even selling a drink named for him throughout the night.

Luongo’s 489 career victories are third in NHL history behind only Martin Brodeur and Patrick Roy, and Brodeur is the only goalie to have appeared in more games or made more saves than Luongo. Among the seven goaltenders to appear in at least 900 games, Luongo’s .919 career save percentage is the best.

He never won the Stanley Cup; Luongo played for one in Vancouver during the peak years of his career after leaving Florida, returned to the Panthers and wound up retiring as their all-time leader in wins and popularity, and is a lock for enshrinement one day in hockey’s Hall of Fame.

He had character and is a character. Luongo wrote two retirement announcements last summer, one of them funny to go on his Twitter page, the other an open letter to fans where he bared his soul and revealed how hard the decision was to step away from the game.

And his poignant pregame speech after the massacre at Marjory Stoneman Douglas High School two years ago – the school is in Parkland, Fla., the place where Luongo and his family make their home – remains one of the most talked-about moments of his career. He didn’t write a speech that night, just took the ice with some talking points. His speech for Saturday is written, and it’ll be emotional for different reasons.

“Special player,” Panthers coach Joel Quenneville said, in remarks aired in an episode of the team’s Territory Talk podcast. “He won a lot of big games. With a couple of organizations, he was the signature player. [...] He’s a battler. He’s a competitor. He’s a great guy away from the game as well. He’s great for the community, he’s great for the league, he’s entertaining with his, what is it, tweets? It’s well-deserved and a great honour.”

Luongo could have played again this season. He was under contract for three more years when he decided that his body was telling him enough was enough and retired. He’s had his skates on only twice since, once for some Christmas laps with his kids, the other in the last few days to tape something related to this weekend’s celebration.

His pads have not been on since he retired. He’s not sure if he’ll wear them again.

But he’s still with the team and didn’t wait long to transition to the next phase of his hockey life. Luongo is the Panthers’ special adviser to general manager Dale Tallon, his hope being that he remains with Florida for many years to come.

In other words, his goal will be the same with his No. 1 swaying over Florida’s ice as it was when he was wearing it on the ice.

“I’m as invested in this team as I’ve ever been,” Luongo said. 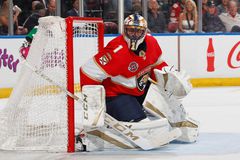 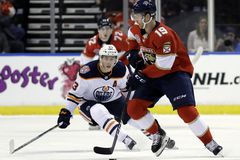